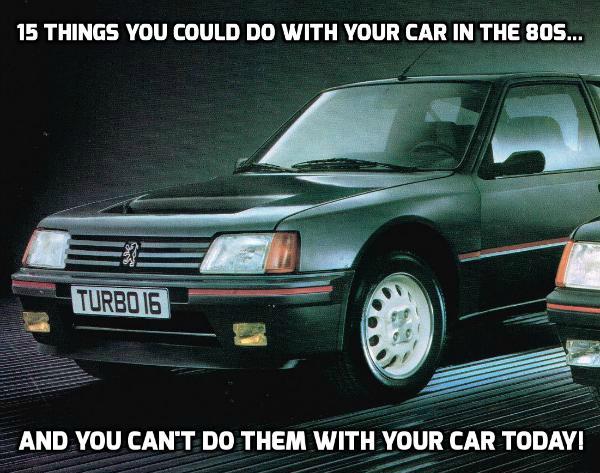 Modern cars are packed with luxurious electronics that we could only dream about in the 80s. Only the high-end cars had the luxury of electric windows, air conditioning and power steering, and some gadgets hadn't even been invented.  Our computerised cars are very different from the models we were all driving back in the day.

However, there are plenty of things you could do in an 80s car that would be impossible or highly unlikely today. No, we're not talking about any rude stuff, either - you have a filthy mind!

So without further ado, let's take a look at

1. Manually Wind Down the Windows

Only the well off could afford the luxury of electric windows in the 1980s, and I certainly was NOT one of them! Indeed, the majority of car buyers had to make do with a manual window winder and actually use the muscles in their arms. If you owned a British Leyland Princess, then the winder would sometimes come off in your hand. At least, it did in the model my Dad owned! 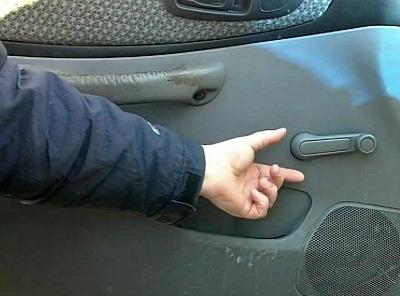 2. Pull out the choke

Yes, most cars in the 80s had a little knob called a choke. You would pull it out for cold starting and then push it back in again once your engine had warmed up. The problem was that you would often forget about the thing altogether and drive all the way to work with it still out!

However, the main reason people didn't start their cars in the 80s was because of reliabillty issues, particularly if it was made by British Leyland.

Flat batteries were a common problem in the winter months. Yes, the winter's were colder, but modern day batteries are certainly more reliable. More mechanical parts meant that the chances of something breaking down were substantially higher. I remember having to replace the gearbox on my Austin Metro with little over 20,000 miles on the clock!

3. Drive without a seatbelt

It's now hard to believe that before 1983, you could actually drive along the road without wearing a seatbelt! Back seat passengers didn't have to wear one until 1991, though. It took several years for people to get into the habit of wearing one, and the police were quite forgiving for the first year while people adjusted to the new law.

There was an occasion where I was very glad the law was brought in. I was driving at speed in a works van back to the garage when someone in a Jaguar pulled out in front of me. I always remember hearing the jolt of the seatbelt as it held me back in my seat. Goodness knows what would have happened without it. I was a naive, speed-hungry teenager at the time, and it certainly shook me up. Luckily, no one was injured, but it certainly taught me to slow down!

4. Light a cigarette with the car's built-in electric cigarette lighter.

These were once fitted as standard, but now these days there is just an empty socket and you have to buy a lighter as an optional extra.

5. Smoke with your kids in the car

Yes, a new law introduced in 2015 in the UK means that you can no longer smoke with your children as passengers. In the 80s, you could smoke just about anywhere you wanted to and it was more socially acceptable to do so.

6. Fill your ashtray with cigarette butts

Do any cars have ashtrays anymore? There certainly isn't one in my Vauxhall Astra. No doubt, these can be bought as an optional extra, but I have't seen one in many a year. I do remember the stench in my parents car from the overfilled ashtray, though. This is one item I'm glad to see the back of!

7. Service your own car

Car's were much simpler to understand back in the day, and many people would get down and dirty and service their own car.

These days you need to be a computer expert to understand what's going on under the bonnet, which is a great shame, although cars are generally a lot more reliable.

8. Call a mechanic from a phone box to look at your car

Before the advent of computers, you could phone a mechanic from a telephone box and he would come out and look at your car. A phone box is becoming a pretty rare site these days with just about everyone owning a smartphone, of course. Now it would appear that you need to contact a computer expert with a pretentious title such as "motor vehicle technician", which merely gives the garage an excuse to charge your an even higher fee for a repair.

However, calling anyone from inside your car was impossible for most people. Hardly anyone had a mobile phone as they cost a small fortune to buy. The first phones didn't go on sale until 1983, and that was only in the U.S. and they cost $4000 each. If you broke down, then you would have walk to the nearest garage or landline.

9. Play a cassette on your Car Stereo

Do you remember when you used to make your own mix tapes using songs you taped off the radio? Many radio cassette players came ready-fitted in higher end cars, although some of them were pretty rubbish. As a teenager with a need for deep bass, you would need to pop down to Dixons, Currys or Argos to buy yourself a half-decent one that you could impress your mates with. If you didn't have much cash, then a Saisho or Matsui would have to suffice.

I still have vivid memories of the anger I felt when my Now That's What I Call Music 6 cassette was mangled by my bargain-priced Saisho cassette player, which I'd bought from Dixons, regretfully. The lousy suspension on my Metro didn't help matters, with the cassette player having to absorb every bump in the road. After that harrowing experience, I always made sure I copied the music onto a cheap blank cassette.

A state of the art Saisho CX400 radio cassette player

11. Put leaded fuel into your car.

Yes, they used to add Tetraethyl lead to petrol to help reduce "engine knocking" and add lubricity to the engine, amongst other things. Some scientists believe that all the lead in the air caused people to become more violent, and there is some evidence to suggest that as unleaded petrol became the norm, acts of violence decreased. Judging by the road rage I experience on the roads these days, I'm not sure I can agree with them.

12. Fill your car with graded petrol

You may remember when there was a five star system for fuel. The lower the grade, the lower the octane. 2 star was 92 octane and 5 star was 101 octane. If you wanted to save the pennies then you would put a lower grade in your car and put up with a "pinking" noise from your engine - goodness knows what damage it was doing!  4 star was the standard petrol for cars before it made way for the unleaded variety.

13. Fill your tank for a tenner

Fuel was far cheaper back in the 1980s, and I remember filling my Austin Metro or Citroen AX full to the brim with fuel and still getting change from a tenner. Of course, this may not have been the case for the larger cars, especially in the second half of the decade, but it was certainly possible for many.

14. Clean out the distributor cap with WD40

This was an old trick that I learned in my three years working at a local garage. Distributor caps were prone to damp which shorted out the electric current, and WD40 was an excellent moisture displacement. Removing the cap was also a good way to prevent the theft of your car, although it was highly unlikely that anyone would have wanted to steal my Austin Metro!

Modern cars don't have distributor caps, which is just one of many reasons they are far more reliable.

Today's cars rarely rust, but many models of cars in the 70s and 80s were affectionately known as "rust buckets". I had to rescue the the front wing of my Metro by filling an ever-increasing hole with filler. My boss had a rusty MG Maestro which he was too lazy to wash, and I'm pretty sure it was the mud holding the thing together! Many Japanese cars were prone to rust and many believed it was the salty sea air the cars were exposed to during their transportation. Whether that is fact or fiction is anyone's guess.