FASHION IN THE 70s

From Roger Moore's Safari Suits to John Travolta's white disco suit in Saturday Night Fever, the 1970s was certainly an interesting decade for fashion. On this page, I'm going to take a look at the wide and varied array of fashion styles that people adopted during what was a very memorable decade. 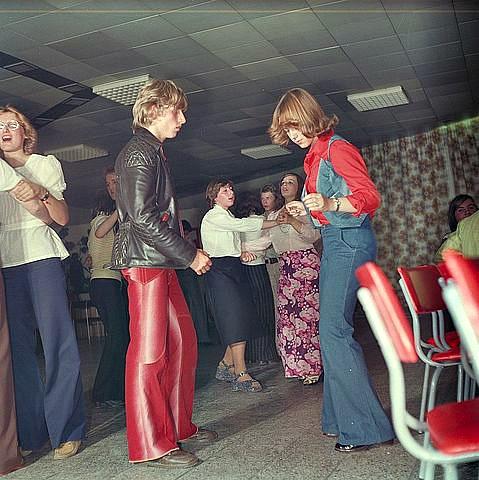 Can a photo possibly get any more 70s? Here we have a couple dancing in what looks like red leather and denim flares, at a disco with a foam-tiled ceiling and flower-patterned curtains. The girl has a classic flick hair style, too, and note the platform sandals and eye-catching pink and brown palazzo pants being worn by the girl behind them.
Photo credit: Wikimedia Creative Commons 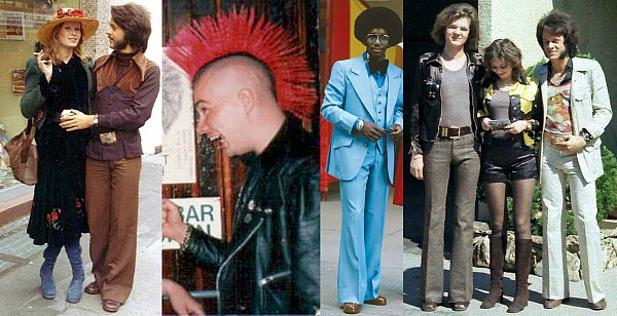 By the late 70s, the disco scene was thriving, especially in the nightclubs and discotheques of major U.S. cities. The disco fashion was extremely popular, with men wearing expensive (or expensive-looking) silk nylon, shiny shirts with big, pointed collars and a couple of buttons undone at the top to reveal their chest - the hairier the better! This would be worn with a leisure suit and sometimes a medallion.

For ladies, long, semi- transparent and flimsy dresses - preferably designed by the American fashion designer Roy Halston Frowick - were worn with a necklace. 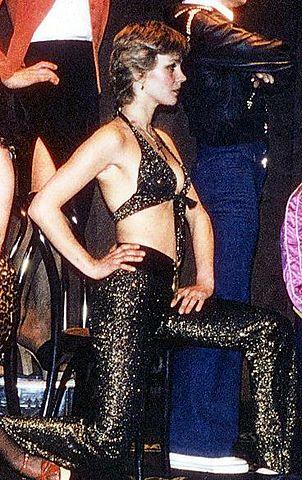 This is the Swedish model Ulla Jones in 1976 wearing a lurex halter top and matching flares.

Also popular were wet-look, shiny disco pants (leggings) and hot pants, which were very short and cheeky shorts that were not just popular for disco dancing, but also as an everyday fashion item. Denim (as worn by Daisy Duke in The Dukes of Hazzard) and paisley patterned hot pants were popular. Some companies even used them as part of their uniform, which would be seen as rather sexist today, of course. 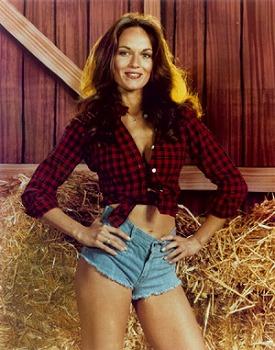 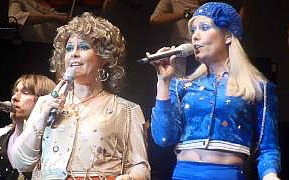 ABBA introduced the World to a whole array of flashy costumes during the 1970s. 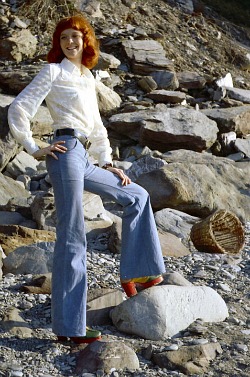 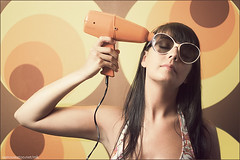 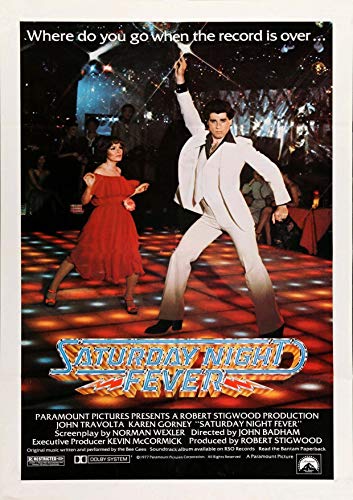 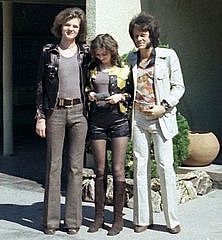 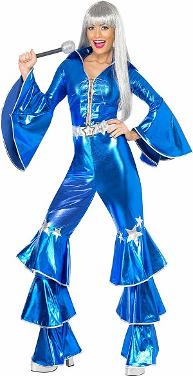 These were also very popular for dancing under the glitter ball to. Numerous 70s pop and rock artists embraced the style, including Elvis Presley, Abba and The Who. The even sexier catsuit was also popular. Read more about Jumpsuits

One of the most recognised fashion styles from the 1970s, here we see a fine example from 1971 of bell bottoms and hot pants. One of the finest examples of flare wearing can be seen with John Travolta in the disco-orientated movie Saturday Night Fever.

No one could possibly discuss 70s fashion without mentioning the flamboyant glam rock era. Also called glitter rock (thankfully named because of the use of glitter, not after Gary Glitter), the clothes were extravagant and colourful, and worn with lots of platform shoes or boots, make-up and, of course, silver glitter. The music was diverse, with quite different styles adopted by artists such as Alvin Stardust, David Bowie, T. Rex, Slade, Sweet etc.
Perhaps, the most memorable part of the glam rock scene was David Bowie's Ziggy Stardust character. Created in 1972, this became one of the most iconic fashion images of the 1970s. It coincided with the release of the concept album The Rise And Fall Of Ziggy Stardust And The Spiders From Mars, which went Platinum here in the UK. 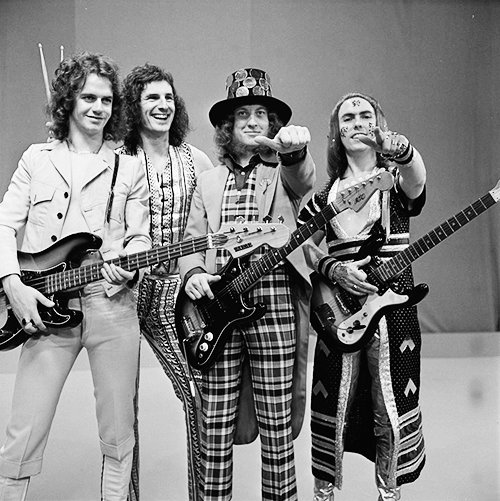 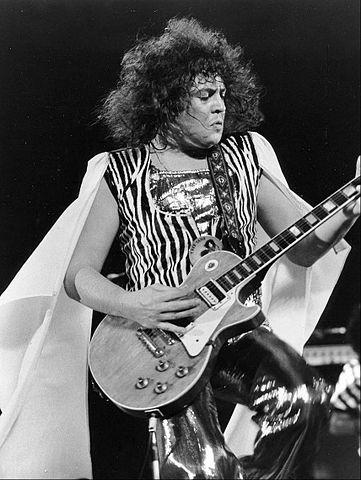 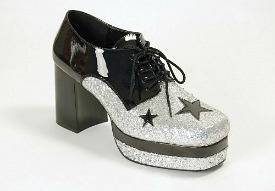 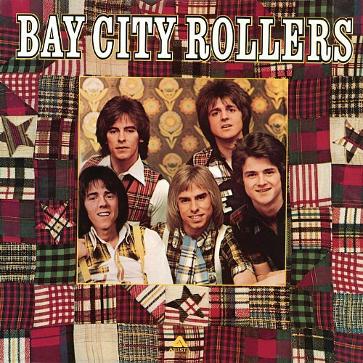 In the UK, the Scottish pop band Bay City Rollers helped to popularise tartan and rolled-up/cropped jeans. I certainly remember many of the boys at primary school trying to replicate the style.

I remember my Dad wearing a knitted tank top on a regular basis in the 70s. Particularly popular were these patterned Shetland designs, as shown below. 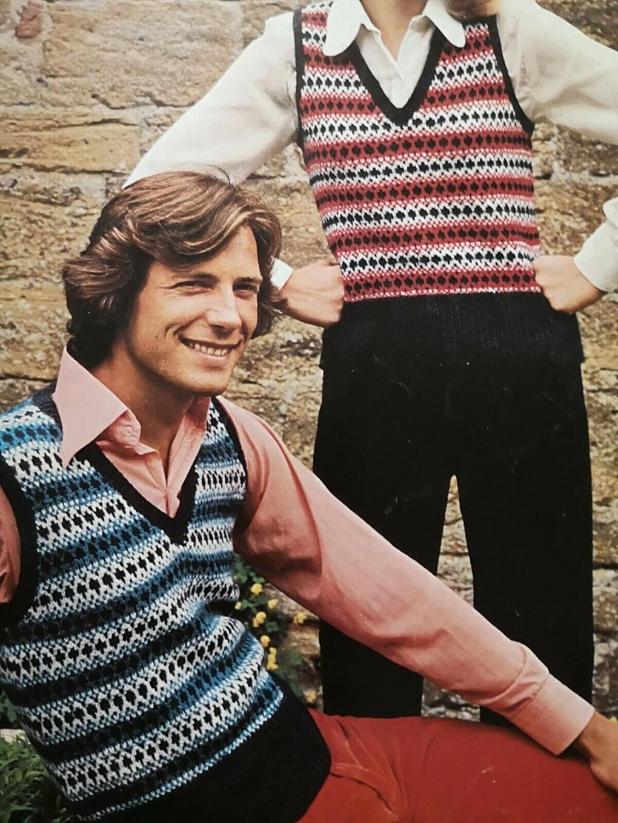 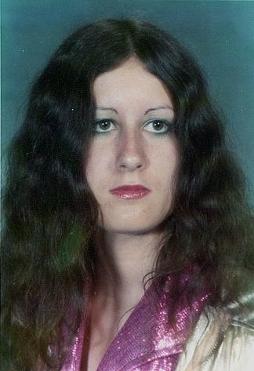 The public domain photo above was taken in 1974 and features a young lady who is wearing typically long hair with a centre parting. 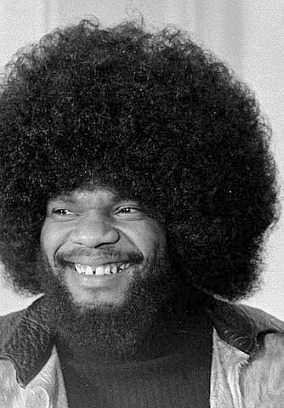 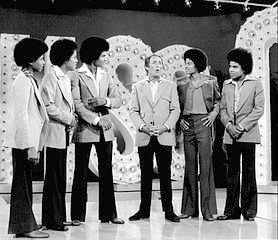 The Afro is often associated with the 60s and 70s, but its roots (forgive the pun) appear to go back to many centuries ago. The Circassian beauties who lived in the North Caucasus region of Russia had very similiar, big hairstyles.

During the 1970s, though, there was a fad for longer and bigger afro hair, which was popular with artists such as Jimi Hendrix, The Supremes and The Jackson Five. However, just as the style was becoming more mainstream, it fell out of favour with African-American people who started adopting braided hairstyles. Stevie Wonder wore one such style called the cornrow. 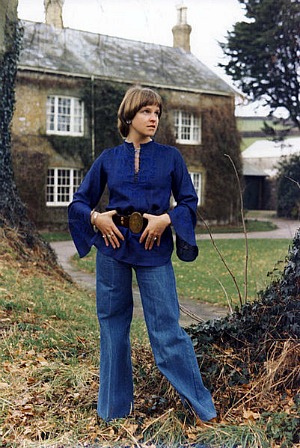 This girl has a mid 70s pageboy hair style, and is wearing a top sporting medieval style wings which is belted across the middle. The style first became popular in the 50s and 60s. 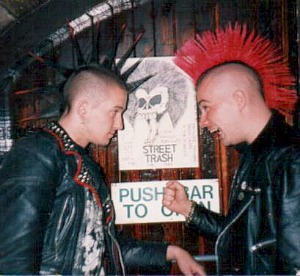 The image shows two punk rockers sporting a mohawk (known as the mohican here in the UK). The style was also worn by the native Amercians of Mohawk Valley, and has been discovered on the body of a 2000 year old mummified man in Dublin, Eire. 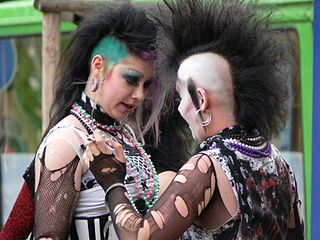 Photo credit: Grant Mitchell
These two goth girls are wearing Deathhawk hair styles, which are part of the gothic rock movement first seen in 1979, and which became more popular during the early 80s. 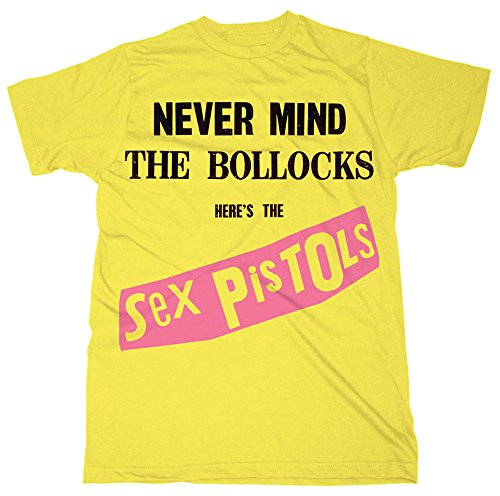 There were more militaristic punk styles, darker gothic punk and glam and dance punk which used brighter colours. There were probably a couple of dozen punk subgroups in all.

These were made popular by designers such as Malcolm McClaren and Vivienne Westwood and were worn by the Sex Pistols, The Clash and Adam Ant, to name but a few. Mens drainpipe bondage trousers tended to be more baggy and crinkled than the smoother-fitting ladies design, and also had larger pockets with more metal parts such as chains and skulls etc.

This was very popular in the UK (particularly red tartan), although the use of tartan as an anti-establishment symbol, no doubt, upset many traditional tartan-wearing clans in Scotland.
Also visit our Punk Fancy Dress page 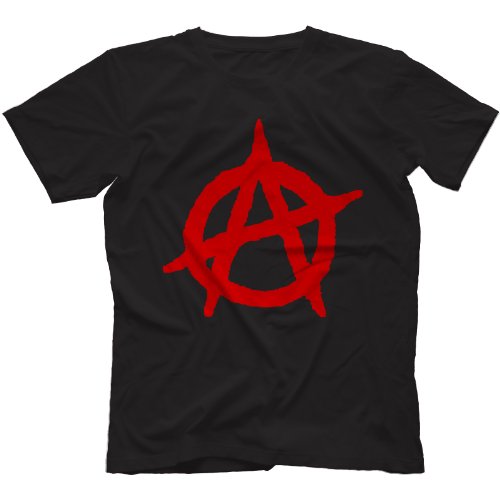 The stylised red spray paint version of the circle-A logo was used by punks during the late 1970s, and it is believed that the original logo may have been used by anarchists as far back as the Spanish civil war. 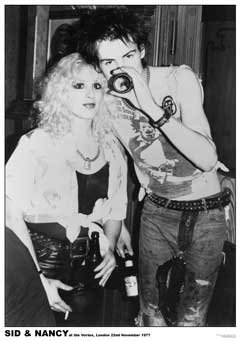 A group of British punks in the 70s 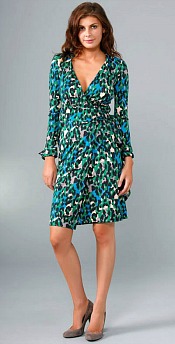 The Jersey wrap dress was made popular by the Belgian born, American fashion designer Diane von Fürstenberg. After divorcing the German Prince Egon of Fürstenberg in 1972 (and losing her title of Princess), she started work on the wrap dress which was knitted from Jersey and became extremely popular during the mid to late 70s.

Both of the photos above feature original Fürstenberg wrap dresses. The one on the left is called Floral Italy and the other one has a painted leopard design.