File Size 5.1mb
Version 3
This game gets off to a promising start, at least, with a wonderful rendition of the Doctor Who theme music in 8 bit style! On the start screen we are told that the objective of the game is to "get to the tardis" with instructions on how to move the Doctor.

There are no game options, so after touching the "Play" button I was transported directly to the start of level one. At the bottom left of the screen are two red up and down arrows with a target button in the centre. Pressing these allows the Doctor (an 8-bit version of David Tennant) to jump, crouch and fire. Touching the right side of the screen moves the Doctor forwards - you can't move backwards!
It quickly becomes apparent that the game is a sideways-scrolling platformer that lacks any animation whatsoever. The Doctor simply floats across the screen (maybe he's using an invisible hover board?) and whether this is down to lazy programming or the use of one of those lousy free game creators, who knows? It's just laughable! On moving towards the right of the screen, the first enemy I encountered was a dalek. Indeed, all of the enemies on the first level are daleks. They hover, too, and as hovering daleks weren't around back in the 8-bit gaming days (the 1980s to be precise), this is a  ridiculous idea, too. They don't even fire at you and after being hit with just a few shots from your sonic screwdriver, they simply disappear with no explosion effects. The collision detection is pretty poor, and the bullets disappear even before they touch the Dalek!
The controls appeared to be fine until I tried to get up the stairs. What a nightmare this is, and the controls are so glitchy that I almost gave up. It wouldn't be so bad if there was any point in having stairs in the first place! When you do finally make it to the top there is nothing there, and then you simply walk back down to ground level - completely irrelevant to the game!

The most challenging part of the game is jumping over the gaps in the platforms and trying to get up and down those damn steps. The enemies are just for decoration and can be destroyed far too easily without putting up a fight. There is nothing to collect, no timer and nothing remotely interesting to do. It's no wonder that ther Doctor is so eager to get back to the Tardis, he's dying of boredom!

The other major problem is that you only have one life, so just one false move (usually caused by the glitchy controls) and you have to go right back to the start. The graphics are okay in an 8-bit kind of way, the Tardis, Cybermen, Daleks and other enemies (and the Doctor himself) look half decent, but the game itself is utterly boring and irritating to play, with the main highlight being the 8-bit music.

It would also appear that the developer of 8 Bit Doctor Who has asked all of his friends to review the game at Amazon judging by the number of 5 star ratings. Don't believe the hype. If this is version 3, then I dread to think what the previous versions were like! 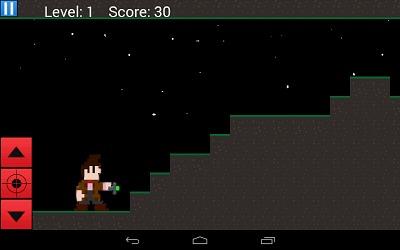 The first mighty enemy - a Dalek that doesn't fire! 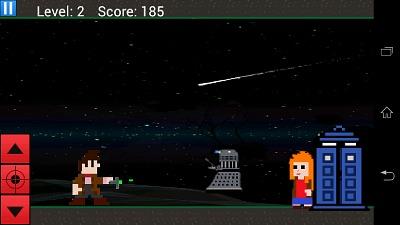 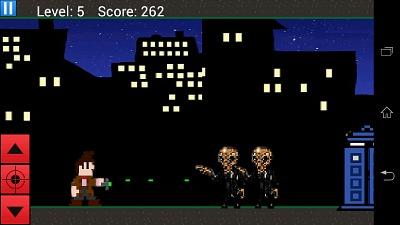 This is like taking candy from a baby.
Blocky Kong Review