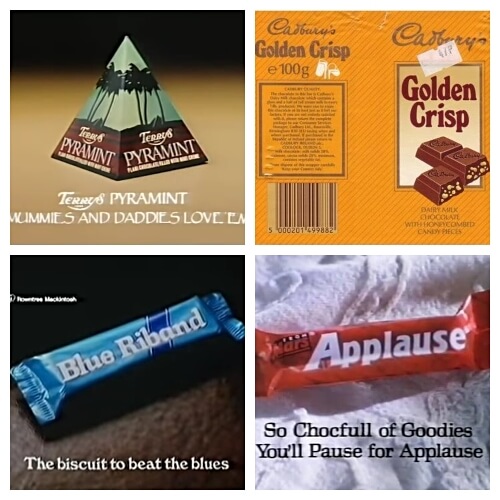 On this page, I'm going to take a look back at some old chocolate bars from the 80s and 70s. Some can still be bought, although they have had several facelifts since back in the day, while others are now just a distant memory, sadly. From Applause to Walnut Whip, take a trip down memory lane and see how may of these you can remember...

Disclosure:This post contains affiliate links to Amazon.co.uk, from which I earn a commisison.

Now this was a pretty tasty bar packed with nuts, raisins, dried apple, caramel and wholemeal biscuit. Mars Applause launched in 1989, and was popular for a time in the 90s, but was discontinued before the Millennium. 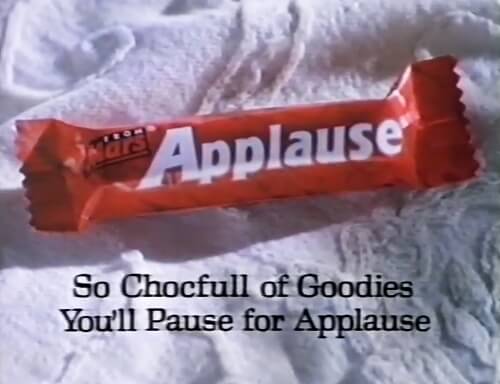 Very similar to a Mars bar, Aztec was made from milk chocolate, nougatine and caramel. It launched in 1967 and lasted for a decade before being dropped in 1978. 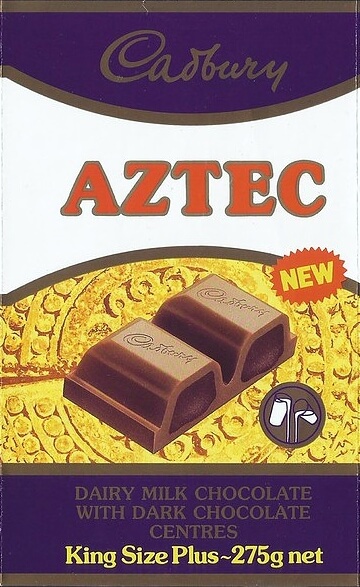 Remember Banjo? It had two chocolate-covered wafer fingers and was launched in 1976 by Mars. It was kind of like a Drifter, but had a layer of chopped peanuts. There were two flavours, peanut with a dark blue wrapper and toasted coconut with a red wrapper. It was totally gorgeous, but, sadly, it disappeared sometime in the 80s.

Remember these? Well, actually you can still by Blue Riband, although the wrapper looks very different. This advert from 1985 features the slogan "The biscuit to beat the blues". I quite often found one in my lunchbox at school, and they made a nice change from Penguins and Uniteds, for sure. These milk chocolate covered caramel wafer bars were made by Rowntree Mackintosh before Nestle bought out the company in 1988. 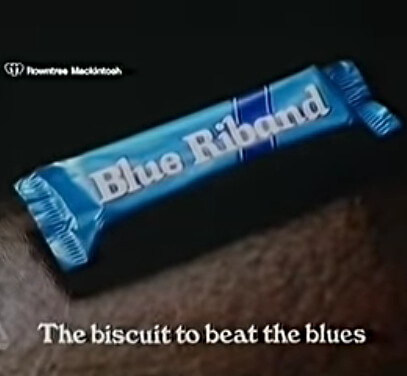 Who else adores the rich and golden creaminess of a Nestle Caramac bar? They're truly delicious and you can still buy them, although my teeth wouldn't be able to cope with the sweetness these days. Kids still love them, though! 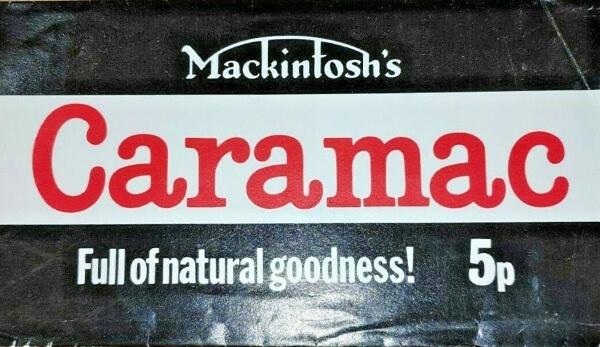 Created by Cadbury's, this long and gooey bar is still available today from good sweet shops, although with a different wrapper design. This is a chewy and long stick of chocolate with triangular holes running through it. When you bite into it, the sticky centre is, well, curly and wurly! 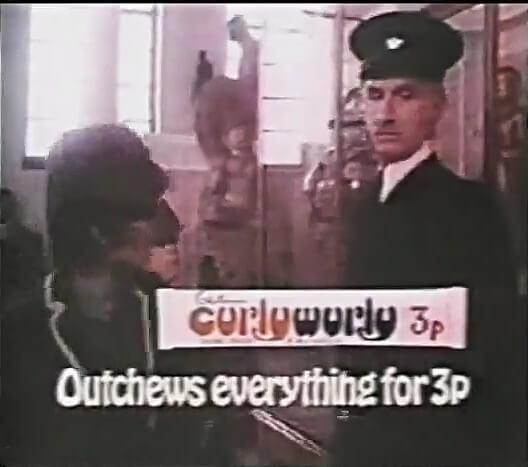 I can never resist Cadbury's chocolate and I used to love a Freddo when I was a kid, probably because they were cheap! They're still available, althought I'm not quite sure why I got so excited by a chocolate bar with a frog on the wrapping, as I hate frogs! I guess he looked friendly enough, though! 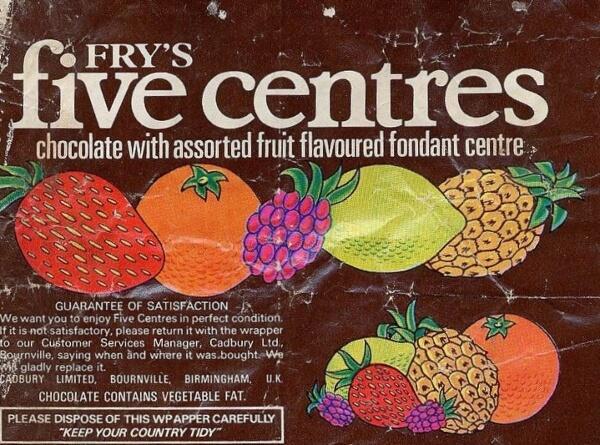 Annoyingly, Fry's Five Centres were phased out in the early 90's - please bring them back! It featured five different fruit flavoured fondant centres (orange, raspberry, lime, strawberry, and pineapple) and it was always a surprise as to which one you'd bite into next. You can still buy the Fry's Cream, Peppermint, Orange and Raspberry bars separately, though. 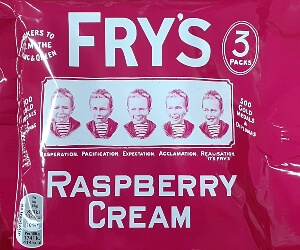 These are really difficult to find in the shops, so I was delighted to find these available online. I absolutely adore these, and you can also buy Orange Cream and Strawberry Cream. The original Fry's Cream launched in 1866, which replaced Fry's Cream Stick, and features a plain fondant covered in dark chocolate. Peppermint Cream, Orange Cream and Five Centre were launched in 1934. 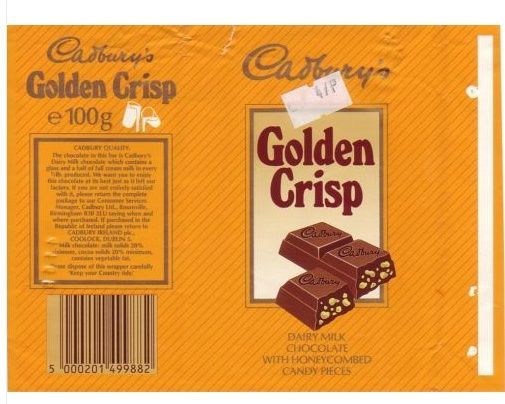 This is an irresistible chocolate bar by Cadbury's which contains honeycombed candy pieces. Just someone mentioning the word honeycomb has me salivating, and this is yet another product on this page that I adore (it's no wonder I have a pot belly!) and, thankfully, you can still buy these.

Consisting of nougat, caramel and peanuts, enveloped in milk chocolate, Marathon was launched by Mars in 1930. However, on July 19th 1990, the Amercan company changed the name to Snickers (which was the name being used by the rest of the globe), which upset millions of fans of the bar in the UK. Nonethless, sales of the bar remained healthy, and the Marathon bar returned in 2019 as a limited edition four pack, which was made available in Morrisons for just three months. 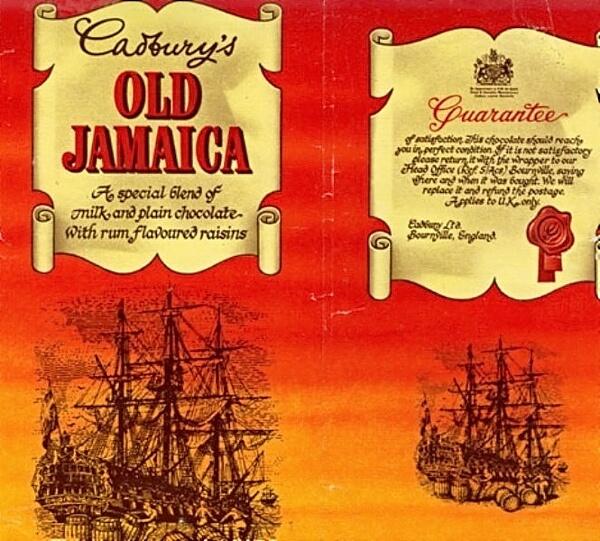 Originally launched back in 1970, Old Jamaica featured a delicious mix of dark chocolate and rum flavoured raisins. It has been relaunched as a limited edition several times, but you'll be delighted to know that Cadbury relaunched Old Jamaica in 2020, under its Bourneville brand, and, hopefully, this time it will be permanent. You can also buy Cadbury's Australian version called Old Gold on Amazon.co.uk., although it tastes like a watered down version of the orginal. 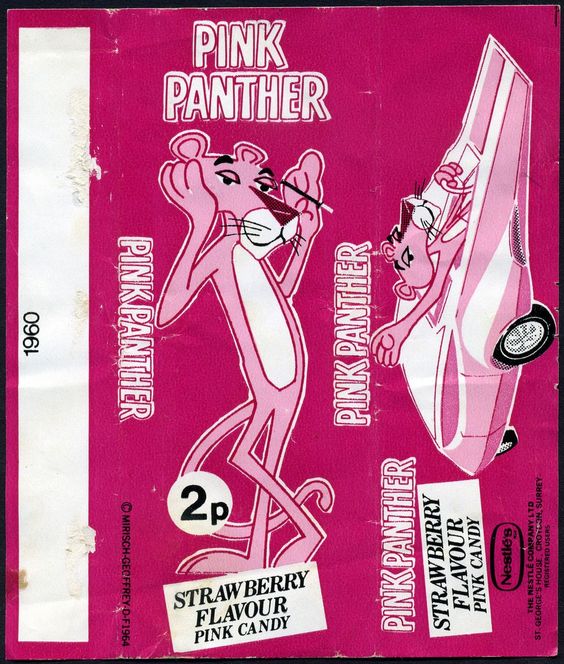 Now, this really brings back some fond memories. The creamy strawberry flavour Pink Panther Candy bar from the 70s is no longer made, but you can buy wafers. Was it a pink delight? Hmm, probably full of E numbers, but 70s kids didn't care! 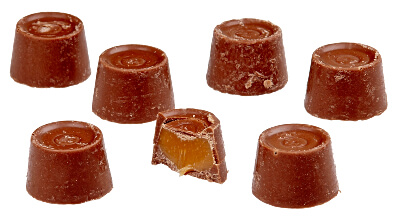 Do you love anyone enough to give them your last Rolo? The main problem with these is that I felt like finishing off the whole tube before giving anyone the chance to get their mitts on the last one - don't you just love that gooey centre? You may remember the TV ad featuring a cute cartoon couple. 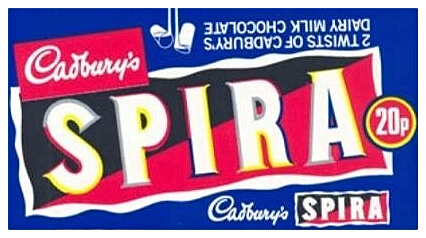 Cadbury's Spira launched in the mid 1980s in limited parts of the UK, before being rolled out countrywide in 1989. Spira contained two fingers featuring twisted spirals of chocolate, and was marketed at 15 to 24 year olds. Sadly, due to falling demand, Cadbury's stop making them in 2005. 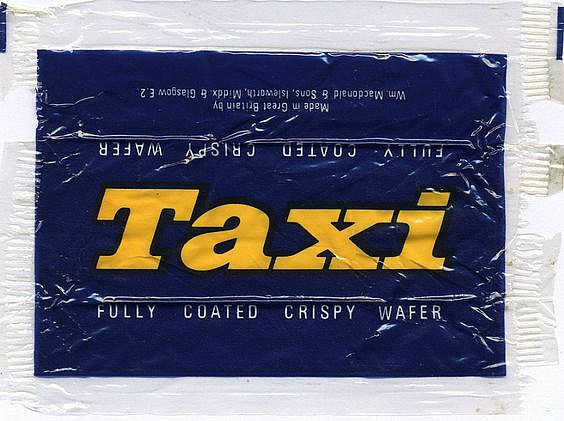 Back in the 80s, you could not only call for a taxi, you could eat one, too! These chocolate coated wafer and caramel bars were originally made in Great Britain by W.M Macdonald & Sons, who were acquired by United Biscuits. McVitie's took over the manufacturing until they were discontinued around 2015. 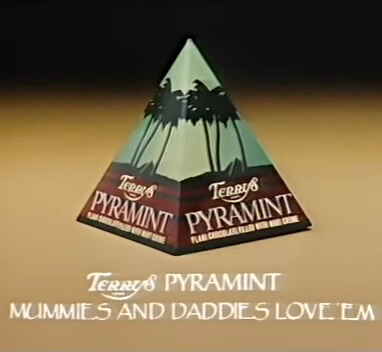 Now, I really miss Pyramint, which was, as the name suggests, a plain chocolate pyramid filled with a deliciously cool, mint-flavoured fondant. It was very popular in the 1980s, but fell out of favour (but not flavour!) in the 90s when Terry's ceased production - darn! You may remember the TV advert featuring an Egyptian Mummy, which included the slogan "Mummies and Daddies love 'em". It was narrated by Lesley Philips and Kenneth Williams.

Honestly, I really can't remember Cadbury's Ticket, but it certainly sounds tasty with peanuts, raisins and biscuits - just the ticket! This wrapper is from the 1980s. 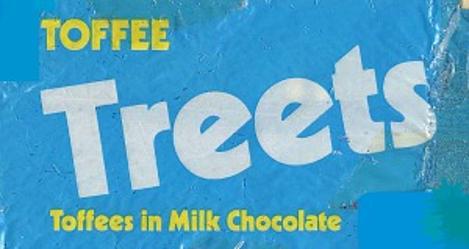 These produced by Mars confectionary from the 1960s to 1988 when they were discontinued and replaced by M&M's. However, they were relaunched in 2009 for a limited time.

They were originally just called Treets, which were peanuts covered in milk chocolate and a glazed candy shell. Eventually, three different types were launched; Peanut, Chocolate and Toffee Treets. All of these had the candy shell. 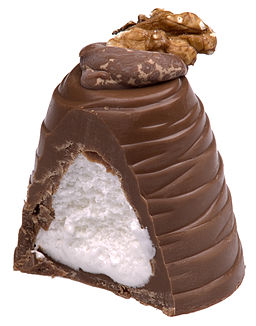 Made by Nestle, this is a cone of chocolate with a whirl decoration on the outside and delicious vanilla fondant on the inside. Launched in 1910, the original Walnut Whips were hand made and had deeper ridges in the chocolate with broken walnut inside the cone, rather than on top. A new version is available these days without the walnut, but, thankfully, you can still buy the original version with the walnut intact. Just wondering who took a bite out of the one featured here - was it you?!