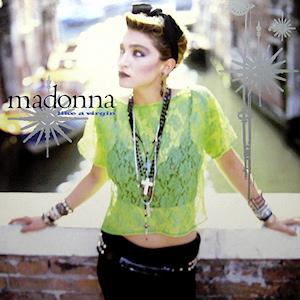 For this post, I'm going to take a trip back to 1984. This was the year that Madonna caused controversy with her virgin bride outfit, David Bowie wore "normal" clothing and Adam Ant wore a space suit!

After dying a death during the 70s, mini skirts made a comeback with shiny nylon and leather being the material of choice. Sleeveless T-shirts (known as muscle shirts in the U.S.) were very fashionable with men, as were T-shirts printed with block letter slogans such as "Frankie Say Relax" - you can read more about these further down the page - and these were popular with the ladies, too.

The pictures above feature Madonna Borderline and Cyndi Lauper Time After Time vinyl single sleeve fronts. Note how Madonna is dressed. We see an off the shoulder crop top, a stack of bangles on the arm and jelly bands, Cyndi Lauper's is wearing a fingerless, fishnet glove, a punk-influenced trend that Madonna also was also partial too.

This look was pretty much the norm for fashion-conscious girls back in 1984. Madonna was pretty much a clothing chameleon, and she also created a trend for lace when she wore a lace top on the cover of her 1984 single "Like A Virgin". When she performed the song at the MTV Video Music Awards in the same year, she created one of the most iconic and controversial performances from the 80s when she wore a white wedding dress with a "Boy Toy" buckle and fingerless with white lace gloves. The sexually suggestive "humping" movements towards the end of the performance caused much controversy.

The "Like A Virgin" costume is available at Amazon UK and Amazon.com, although they do not come with the Boy Toy belt. However, this can be bought from eBay (the seller is highly-rated) and if you're in the U.S. also at Amazon.


David Bowie was never one to follow fashion trends and had a style all of his own making. However, in a huge departure from his outlandish costumes, her we see Bowie being considerably more mainstream by wearing a smart suit. Indeed, even musically, Bowie was going through an unusually mainstream period and released what is often considered to be his weakest album "Tonight" in September 1984. When working with Tin Machine in 1989, Bowie stated "There's stuff on the album that I could really kick myself about". He also once stated that he was going through a "Phil Collins" period.


The Katherine Hamnett inspired "Frankie Say Relax" T-shirt became almost as big as the band during 1984. The term refers to not using a condom during sex, and the single "Relax" by Frankie Goes To Hollywood was banned by the BBC for its controversial lyrics. Undisputedly, this this led to the song selling well over 1 million copies and topping the UK charts for five weeks.  However, it became even more cool to wear the unofficial "Frankie Says Relax" and "I Couldn't Give Two Sh*ts What Frankie Says" T-Shirts.


By 1984, we had become accustomed to seeing Adam Ant without the heavy make-up. He released just one single this year, Apollo 9, which is why we see the shiny, silver half space suit concoction here.


Duran Duran reached the peak of their career during 1984 with the singles "The Reflex" and "The Wild Boys".


Blonde highlights and mullet-like long hair (shorter at the sides than at the back) was so very 80s.


Ah, braces! Every now and then a pop star decides to try and bring them back into fashion. However, Limahl was best-remembered for his legendary hair style. The singer appeared on the 2012 series of "I'm a Celebrity... Get Me Out of Here!" on ITV, and spent a bizarre night with celebrity chef Rosemary Shrager in a rat-infested house - how lovely!


This lady had a style all of her own, and she was often seen wearing bizarre headgear (such as an over-sized baseball cap) on top of a crazy hairstyle. The synth-pop band split in 1992 and Mrs Currie is now an artist upholsterer - very posh. 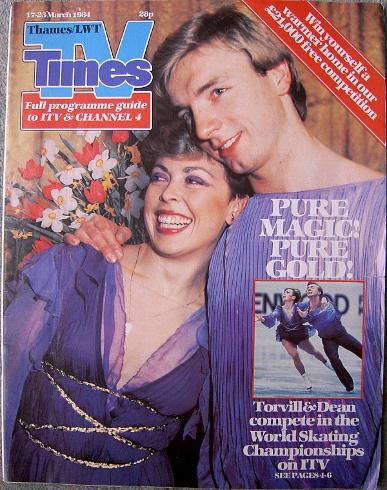 British Fashion in the Early 80s