Popular GADGETS in the 80s

So what gadgets were we all playing around with back in the 1980s? Well, for this post, I'm going to take a look back at some very popular tech from the great decade.
The first video (above) features some of today's kids trying out some 1980's technology, including a dual cassette player, a Commodore Plus/4 computer (which was a bit of a flop back in the eighties) and Atari 2600 console. Hmm, I'm not sure why they gave them Pacman to play on the Atari as it was a notoriously bad version of a classic game. 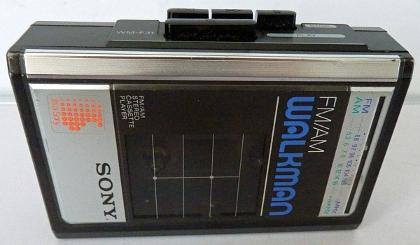 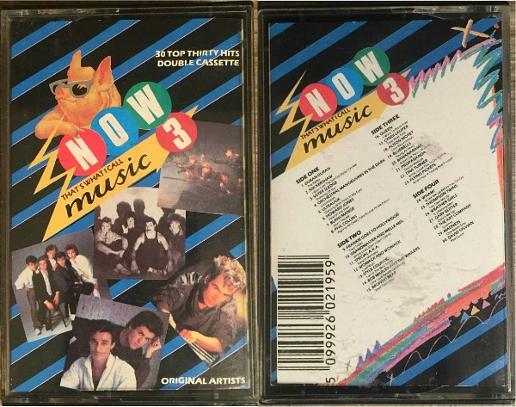 Now That's What I Call Music 3 double cassette album - perfect for inserting into your Walkman.

These day, of course, we can stream endless TV shows and films from internet services such as Netflix and Amazon Prime Video onto our phones, but back in the 1980s, the only way to watch TV on the go was with a pocket TV such as the Sony Watchman. The original model of this portable TV was called the FD-210 (pictured bwlow) and was launched in 1982 in Japan, and 1984 in North America and Europe. This model went on to become the World's first mass produced pocket TV, although you needed really big pockets!
The FD-210 featured a 5cm greyscale display and included a built-in radio. By the end of the eighties, a colour LCD display was made available, although the CRT black and white display was still available until 1994 on the models FD280 and FD285. 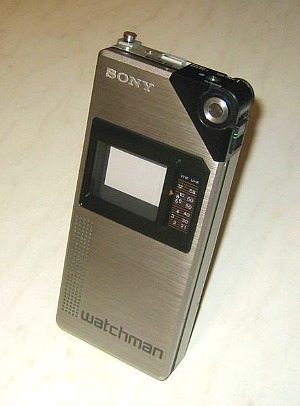 Common Tech Fixes of the 80s

To be one of the cool kids, you had to own a digital watch, which became extremely popular in the eighties, and the best known brand was Casio. You may remember drooling at the extensive selection of Casio watches in the Argos catalogue.

The first watch I had was a Texas Instruments watch (a Christmas present) with a luminous background. It was quite basic compared to the Casio's, but seemed more sturdy and had a luminous green background. I regret not havng kept it, as is was quite a unique model and may just have been worth a pretty penny today!

In 1983, my parents bought me on eof the new-fangled Casio calculator watches. These had only just come on to the market and really seemed futuristic at the time. Like today's mobile phones, watches became more and more sophisticated as the decade progressed, and they soon became loaded with features you didn't actually need - you could actually play space invaders on my calculator watch.

I remember that we used to compare digital watches at school, and it was essential that you had as many cool (but utterly pointless) functions as it was possible to cram into a watch. The number of built-in melodies would have been crucial for your street cred! 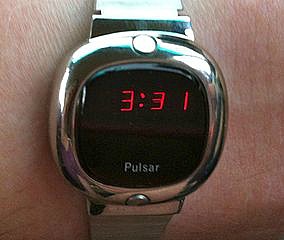 A Pulsar Touch/Command Ladies' LED watch from the 1970s 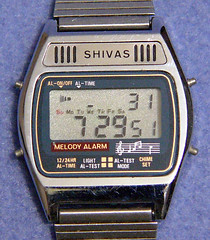 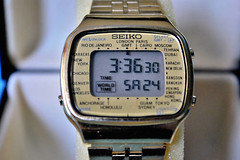 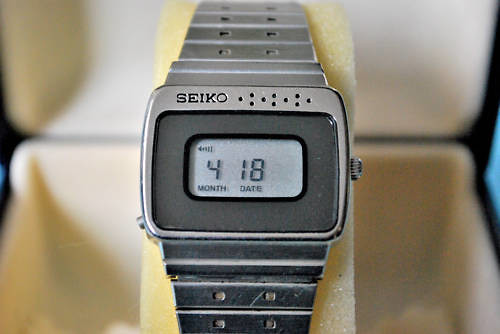 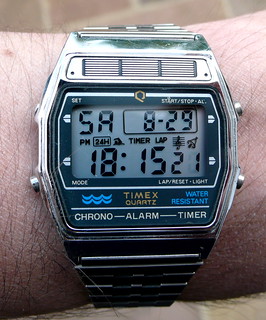 The advent of the digital watch saw a huge decline in sales for mechanical watches. In 1983, Swatch was born and its aim was to recapture the analogue market that had been lost by swiss manufacturers - this was known as the quartz crisis. The designs were bold, quirky and colourful, and were particularly aimed at a younger audience. Each design was given a unique name. The pop swatch became particularly popular later on in the decade (and into the 90s) and could be attached to clothing. 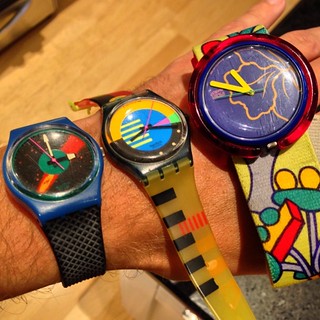 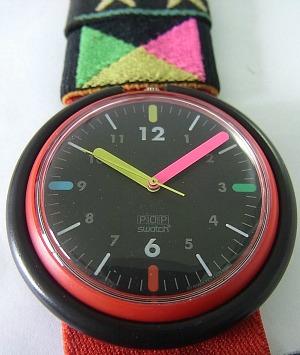 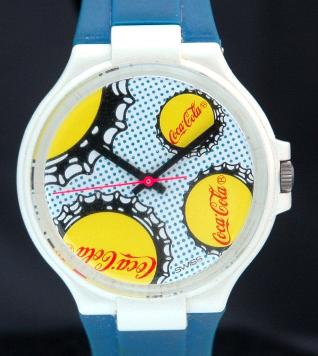 The Polaroid was first launched in the 1960's, but became popular during the 70s and 80s. I always remember the excitement of taking my first polaroid picture and watching it develop before my eyes!

Of course, professional photographers wouldn't go near the things, as the colour wasn't as "real" as in 35mm pictures, and you didn't get any negatives that could be enlarged. But for everyone else, this magical camera was a dream come true!

Taking a selfie in the 80s 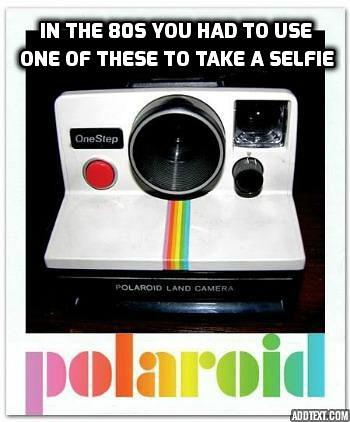 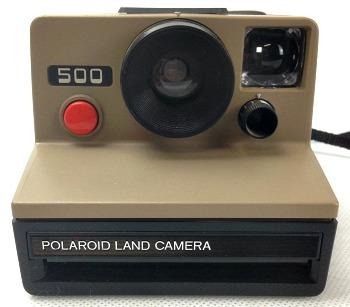 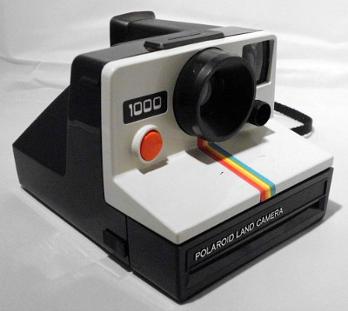 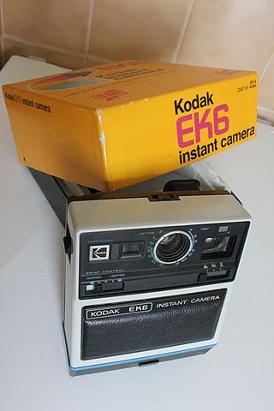 If you managed to get through the 70s and 80s without purchasing a Sodastream, then you must have been living on Mars! Well, actually my parents never bought one, but some of my friends had one. People went crazy for this gadget that made different flavoured fizzy drinks in the comfort of your own home.

The Sodastream included a carbon dioxide cylinder and reusable beverage bottles (suitable for pressurising). You filled the bottle with water, threaded it onto the machine, and with a button push, compressed CO2 from the cylinder is injected, creating the fizzy soda! Then you would add a flavoured syrup and hey presto, you're very own fizzy pop!
However, while that all sounded well and good in theory, I have heard a couple of alarming stories about them exploding. Apparently, leaving the valve open for a second too long could result in a spectacular explosion, leaving fragments of glass and plastic scattered across your kitchen, as well as coating of syrupy deposits. Hmm, I'm kind of glad that my parents didn't buy one!
Aside from the dangers of using one, people eventually realised that it was actually far less hassle to simply leave it to the experts and have ready-made pop delivered to their door, or go down to the shops and buy it, of course. Corona and Cresta ("It's frothy, man") were popular brands back then, as was R. Whites lemonade - were you a secret lemonade drinker?
Pop came in returnable glass bottles back then, and I certainly remember taking them back to the shop and receiving around 10p for each one.

Did you know that the JVC HR3300 was the world's first VHS Video recorder? Well, you do now!

As the 80s progressed, VCR's became more affordable and soon became popular household items. During the late 70s, there were two formats battling it out for supremacy - VHS and Betamax.

Although the Betamax format was superior to VHS, the limited one hour recording tapes - compared to 4 hours for VHS - probably helped kill off the format. The VHS was crowned the winner and quickly dominated the marketplace.

The early VCR's were big and bulky, but pretty solid. Many had big metal switches and wooden fascias. It cost around £600 for a cheaper model, and JVC were one of the market leaders.

I was at Comprehensive School from 1979 to 1984, and had the pleasure of seeing a whole range of different VCR models being shipped into the classroom on the trolley.

We didn't have a video recorder at home until the mid-eighties. Our first model was an Amstrad which featured half-speed recording. This effectively turned a 4 hour tape into an 8 hour tape, although the picture quality was reduced. Also, anything taped at half-speed was incompatible with other standard machines.

Prices of VCR's quickly dropped throughout the 80s. A new machine could set you back close to £1000 in 1980, but by the end of the decade you could obtain one for less than £300. 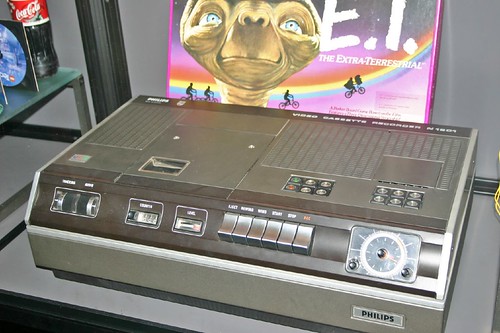 Philips video recorder from the 80s 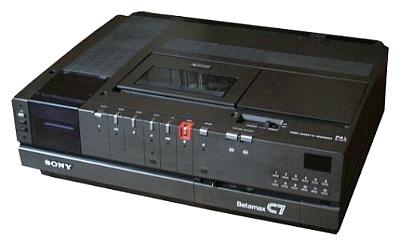 The Sony Betamax C7 video recorder was launched in 1979 as a top of the range machine and was very advanced at the time. It included full infra red remote control.

Home Entertainment Trends from the 80s