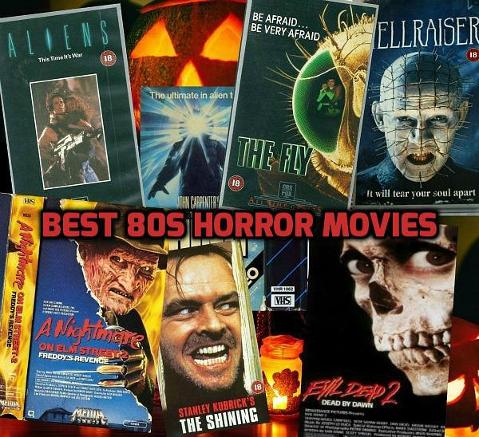 How well do you know 80s horror movies? Well, you will soon find out, because in this article, I'm going to take a look back at some of the best ones from the great decade.

Back in my teen years, I spent many an evening with my hands over my face. That's not because I was anti-social, but because I spent quite a bit of my hard-earned cash on renting out horror films. Hmm, come to think of it, that is being anti-social, but this was only to get me through the boring weekday evenings.

I was easily scared, and lived nowhere near a roller coaster, and so the quickest way to get a cheap thrill was to nip down to the local video rental store. They were popping up just about everywhere (even in the sleepy Cotswolds!) and it was hard to resist the temptation of renting out the latest horror flick.

Horror films were bursting with creativity in the 80s, and became ever more gory and shocking, pushing the censorship boundaries like never before. This led to the introduction of the Video Recording Act 1984 to gain some control of the distribution of so-called "video nasties".

Unlike many other websites, I'm not going to create a top ten list of the best horror films - there are already far too many of them! Instead, I'm going to pick out my favourites from the decade and run through them here in no particular order of greatness.

The 1980s was a decade of countless sequels and remakes that were actually better than the original films. The Fly featured incredible special effects that had our jaws dropping to the ground. I remember being totally absorbed watching an eccentric scientist gradually transform into a fly/man hybrid. It was disgusting and fascinating at the same time, and Jeff Goldblum played the part of our scientist, Seth Brundle, quite brilliantly. But it was also a tragic love story and a very clever remake of the 1958 original.

James Cameron's Aliens was even more intense that the original Alien film, and left the audience with worrying knots in their stomachs. As with many films from the 1980s, Aliens provided ground-breaking and fascinating visual effects that caused many of us to have an eyegasm!

Characters such as Freddy Kreuger, Jason Voorhees and Pinhead had us all terrified of going out in the dark and Beetlejuice was so original and quirky that it completely divided opinion with the critics, leaving them either amused or completely bemused.

As well as the gory low budget slasher films, there were also more mainstream and fun comedy horror movies such as Ghostbusters, Teen Wolf and Gremlins, although the latter was far darker than it should have been for a film obviously aimed at a younger audience.

You can see a Top 10 in the video playlist at the top of this page. This was created by Watchmojo.com and includes some of the films that I have featured here. 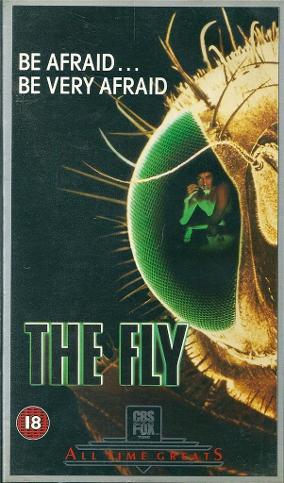 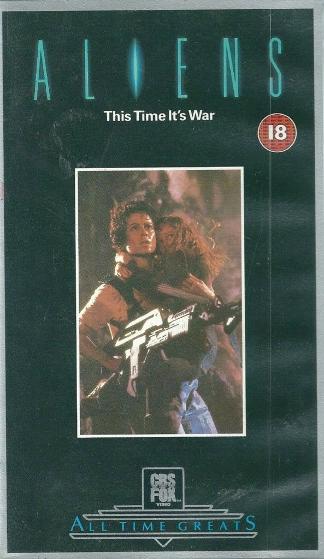 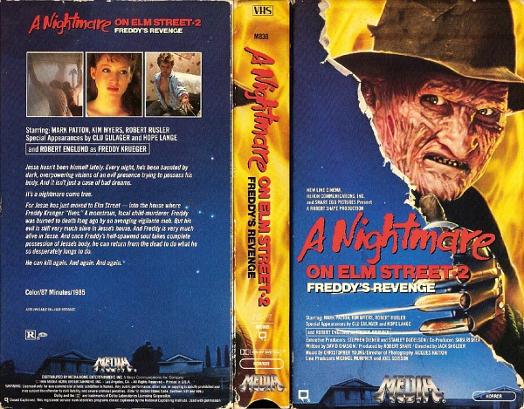 The A Nightmare on Elm Street series (featuring the razor-clawed serial killer Freddy Krueger) started in 1984 and quickly gained a cult following. The original low budget slasher film (written and directed by Wes Craven) was critically acclaimed, although the reception for the numerous sequels was a lot more mixed. 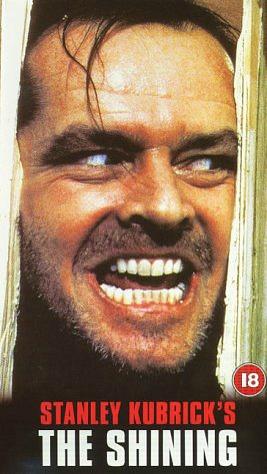 Released to the cinemas in May 1980, Stanley Kubrick's The Shining (an adaptation of Stephen King's novel) actually had a poor start at the box office and the reviews were also mixed, mainly due to its slow pacing. However, by the summer its takings were up and over time critics came to realise that the slow pace actually contributed to the film's mesmeric qualities. 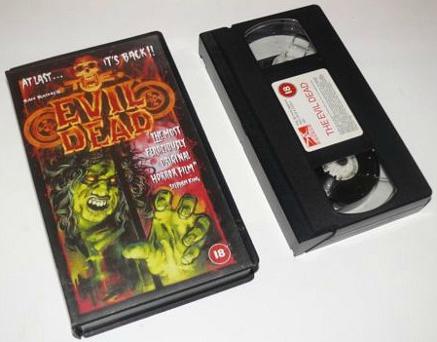 Sam Raimi's debut film The Evil Dead was an instant low-budget classic. Being both grisly and well-made, the dynamic camera work helped to provide a shocking sense of dread. It's now considered to be an iconic 80s cult classic and among the greatest horror films of all time. The film premiered in the U.S. on October 15th 1981, but the UK had to wait until Jan 17th 1983 for its premiere.

The Evil Dead II (1987) also has a cult following and was also well-received by critics, with some even suggesting that it's even better special effects and slapstick gore make it superior to the original. However, overall the reviews were not quite as highly-rated as the original. 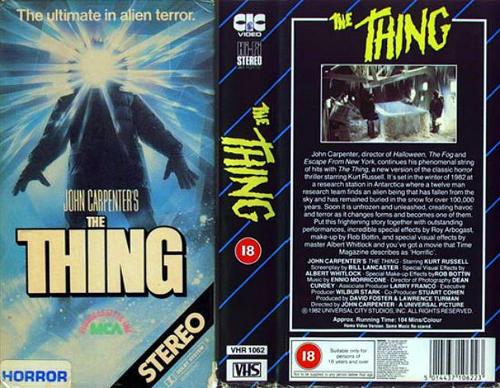 The Thing was loosely based on the sci-fi novel Who Goes There? which, itself, was adapted as the film The Thing from Another World in 1951. Starring Kurt Russell and directed by the legendary John Carpenter, the film wasn't quite as commercially successful as expected, although it was in the U.S. top ten for three weeks. This was mainly due to the release of Spielberg's E.T. the Extra-Terrestrial and Ridley Scott's Blade Runner being released on the same day. Carpenter's direction helped to ensure that the film was more tense and grim than the 50's version, and despite mixed reviews, initially, the reviews have been far more positive in recent years. 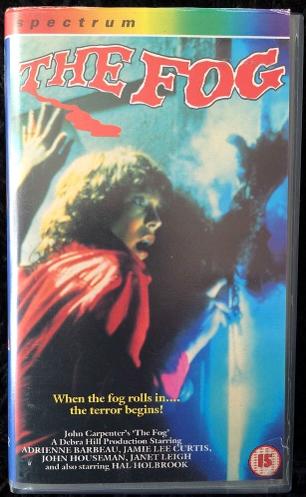 Staying with the multi-talented John Carpenter, he not only directed the 1980 horror film The Fog, but he also co-wrote the screenplay and composed the music. It was shot on a relatively low budget of around $1 million, but looked a whole lot more expensive and lavish thanks to the anomorphic 2.35:1 format. In fact, more was spent on advertising the movie (around $3 million) than on making it, although this proved to be a wise move as it made $21.3 million at the box office in the U.S. and Canada alone.

As with many of the classic 80s horror flicks, reviews were pretty mixed back in the day, although the reviews were better than for his previous film Halloween in 1978 which was, quite wrongly, harshly criticised at the time. The Fog had a chilling ambience and certainly packed a punch. Definitely among the best 80s horror films. 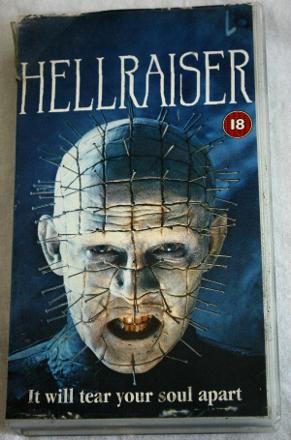 The pretty disturbing horror flick Hellraiser was cutting edge stuff in 1987. Penned and directed by Clive Barker - a man more well-known for his horror and fantasy fiction than for his directing - this was a clever film that was initially banned in Ontario, Canada. It eventually received an R certificate after around 40 seconds of cuts were made. Melody Maker described Hellraiser as "the best horror film ever to be made in Britain". The Pinhead character was one of a minority of intelligent antagonists from the 80s horror films. 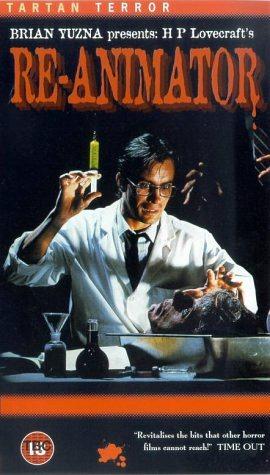 Re-Animator was a refreshing and fast-paced sci-fi horror comedy and the first in a series of films. The plot revolves around medical student Herbert West who discovers a neon green fluid that brings dead tissue back to life - what could possibly go wrong...?

The film was based around a short story by the horror fiction writer H.P. Lovecraft, albeit rather loosely. Made on a low budget of $900,000, the critics had high praise for this original film which was overflowing with outrageously funny deadpan jokes and took 80s gore to a whole new level. It's not as well-known as other horror movies from the decade, and nowhere near as commercially successful, but it's certainly one of the most enjoyable. This cult classic is now available on Blu-Ray with previously deleted scenes. 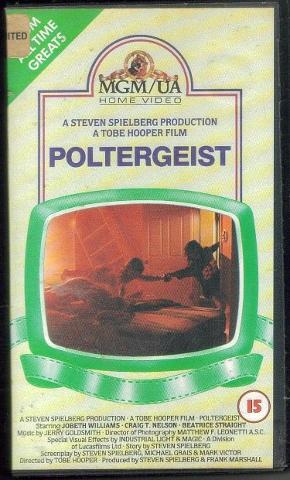 The first and most successful Poltergeist film was set in the suburbs of California, focusing on a normal family that found themselves being terrorised by evil-minded ghosts. This was the highest-grossing horror movie of 1982 and took over $76 million in the U.S. alone. Forget about the 2015 remake, if you want to be scared then watch the original.

Another favourite is An American Werewolf in London. I've already reviewed the movie on this site, so I won't go into too much detail. This British-American comedy horror was, basically, packed with an exciting mix of clever humour and cutting edge special effects. This wasn't just a scary movie, it was actually pretty damn frightening and certainly had many moviegoers spilling their popcorn all over their laps!

So there you have it. That's my choice of the best 80s horror movies. I could actually go on for many weeks listing the dozens of films that I enjoyed, such as Day of the Dead and Creepshow, but there just has to be a cut-off point and this is it!