More Videos from the 90s
Freddie Mercury & Monsterrat Cabelle - Barcelona
It's not often that pop and opera come together, but when it does it can produce something very magical, and Barcelona is certainly that! This magnificent song was originally released on October 26th 1987 and reached #8 in the British singles chart. However, following Freddie Mercury's death in 1991, the song was re-released and featured at the Summer Olympics of 1992 which were staged at Barcelona. This time, the song charted even higher at #2.

Freddie had a fascination with opera, and his powerful voice fitted in well with the soprano vocals of Cabelle. The song was written by Freddie and also Mike Moran, who you may remember from the 1977 Eurovision Song Contest. He co-wrote a tune called Rock Bottom with Lyndsey De Paul, and they sung it together for the UK entry. He also co-wrote Kenny Everett's Snot Rap - how much further away from opera can you get?

If you are wondering what happened to Montserrat Cabelle, well she retired some time ago, although she still makes occasional appearances on the stage. In 1995, the Spanish operatic Soprano worked with Vangelis on the album El Greco.

Check out the extended version of Queen's Radio Ga Ga at my 80s Remix blog.
Blur - Country House
The release of Country House in August 1995 started a run of seven UK top ten hit singles for Blur - these were lifted from the albums The Great Escape and Blur - and this was the band's most successful period for single releases. However, the band's 1994 album Parklife remains their most successful, achieving 4x Platinum.

Released as the lead single from the band's fourth studio album, The Great Escape, the media caught on to the fact that the release date for the song had been delayed until the same day that Oasis released Roll With It. The now infamous 90s battle for the UK top spot was won by Blur, with Oasis having to settle for the #2 spot. Country House sold around 274,000 copies (Blur's only single to achieve a Gold certification) with Roll With it selling 216,000.

A further three singles were released from The Great Escape; The Universal (#5), Stereotypes #7) and Charmless Man (#5).
Ace Of Base - All That She Wants
Swedish band Ace Of Base were hugely successful with their debut single All That She Wants, which was released in May 1993. The reggae-style, europop tune topped the charts in many countries (including the UK) and featured on the multi-Platinum album Happy Nation, which released as The Sign in North America.

Happy Nation was a brilliant demonstration of how to create an upbeat album of almost perfect pop songs. Ace Of Base took a whole array of musical styles and crafted them into a sound of their own. I say almost perfect, because there are a couple of dodgy tracks on their which were trying too hard to fit in with the early 90s techno craze, on which they sound uncomfortably like 2 Unlimited. Overall, though, this is a thoroughly enjoyable listen.

All That She Wants sold around 25,000,000 copies worldwide and received a Platinum certificate in many countries. In the U.S., the song was released later on in September 1993 where it stayed in the Billboard Hot 100 for three months. In the band's home country, the track was released in November 1992.

For a while it looked as though Ace Of Base were going to be the ABBA of the 90s. However, with each new album release the sales were in decline, and by the time their fourth album, Da Capo, was released in 2002, sales of 650,000 worldwide were a far cry from the 25 million achieved with Happy Nation.
Enigma - Sadeness (Part One)
Sadeness (Part 1) topped the charts in 24 countries in 1990 and was lifted from Enigma's debut album MCMXC a.D. The Gregorian chants were sampled from a 1976 album entitled Paschale Mysterium which featured a German-based choir. However, compensation was paid for a lawsuit issued in 1994, as samples from the album were used without permission. The whispering vocals were provided by Michael Cretu's wife and pop star Sandra, who had a dozen hit singles across Europe during the 80s.

Enigma were more successful with their albums than their single releases, and the three follow-up singles Mea Culpa (Part 2), Principles Of Lust and The Rivers Of Belief failed to break into the British Top 40. However, three singles from Enigma's second chart-topping album, The Cross Of Changes, did break into the Top 40 with Return To Innocence reaching #3 in 1994.

I adored Enigma's first two albums, although the first one remains my absolute favourite as the Gregorian theme followed through the whole album. MCMXC a.D. was a real masterpiece, and although it wins no awards for lyrical content, it had such a unique and beautiful sound that you couldn't fail to be mesmorised. There are less of Michael Cretu's vocals here than on later albums, which allows for a more mellow, ambient sound to become prominent, although his voice works particularly well on Rivers Of Belief. This was the most perfect Enigma album, with less rock and lyrical content, but more emphasis on ambience. "Take a deep breath, turn off the lights, and relax"...
Chesney Hawkes - The One And Only
This song is now best remembered for being Chesney Hawkes "one and only" hit, and the phrase is often used as reference to a one hit wonder. However, the English singer and actor actually had a second Top 40 hit during the summer of 1991 with I'm A Man Not A Boy, which reached #27 in the UK.

The One And Only reached No.1 in the British charts on 24th March 1991 and stayed there for five weeks. The song featured on the soundtrack to the movie Buddy's Song, in which Chesney Hawkes himself played the lead role of Buddy Clark. The song also featured in the opening credits of the 1991 movie Doc Hollywood which starred Michael J. Fox, and the song then became an American hit reaching #10 in May of the same year.

Chesney was only 19 when he released this song, and his younger brother also played drums on it. The song was actually written by singer/songwriter Nik Kershaw, who had a string of hits during the 80s, his biggest being The Riddle which reached #3 during 1984. He also wrote Chesney's last single Another Fine Mess which was released in 2005, but peaked outside the British Top 40 at #48.
Deee-Lite - Groove Is In The Heart
The American dance/house group are best-remembered for this song (and the psychedelic video) which reached #2 in the UK and #3 in America, and also topped the Billboard Hot Dance Club Play Chart. They achieved more success on the aforementioned chart between 1990 and 1995 with six number ones, their last being Call Me before splitting-up.

Groove Is In The Heart featured on the group's debut album World Clique which was moderately successful, reaching #20 in the U.S. and #14 in the UK. However, Deee-Lite's follow-up album, Infintity, was less successful peaking at #67 in the U.S. and #37 in the UK. The song featured many samples, the main one being from Herbie Hancock's "Bring Down the Birds". The bass was played by the American funk bassist Bootsy Collins, and there is also a rap by Q-Tip from A Tribe Called Quest, who had their own hit with Can I Kick It? in 1991.

Only one more single managed to break into the British Top 40, the follow-up single Power Of Love reached #25, but stalled at #47 in America. I do actually remember that song which was played quite frequently on the radio and at the night clubs, although it's not half as good as this one!
Page   1    2     3     4     5     6
List of 80s Music Videos
Recently Added Video Pages

Saved by the Bell - The Complete Series [UK DVD]

Saved by the Bell: The Complete Collection (US DVD) 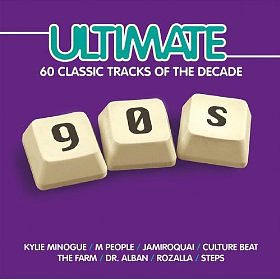 Sabrina, The Teenage Witch: The Complete Series (US DVD)