A-ha "I've Been Losing You"

"I've Been Losing You" was the lead single from a-ha's second studio album Scoundrel Days, and entered the UK singles chart at No.14 on 28th September 1986. It was the second-highest new entry that week, with Madonna's "True Blue" entering the chart at No.3.
The single was a chart-topper in the band's home country of Norway, and also reached No.3 in Ireland and Denmark, No.8 in the UK and Belgium, and was a top 20 hit in numerous other countries. 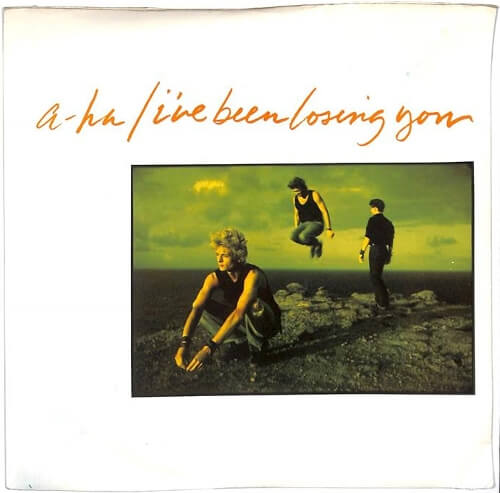 Produced by band members Pal Waaktaar-Savoy and Magne Furuholmen, the song isn't one of A-ha's best known songs here in the UK, and certainly didn't get the airplay that their mega hits "Take On Me" and "The Sun Always Shines on TV" received. Indeed, the song that I remember most from Scoundrel Days is "Cry Wolf", which gained a lot more attention on commercial radio, and would probably have made a far better choice for lead single in terms of commercial success, although it's not necessarily a better song.
The B-side included an early version of "This Alone is Love" which was later re-recorded for the band's third studio album Stay On These Roads. This version featured an organ solo part, with the album version featuring a guitar solo.
The music video was disappointing and pretty forgettable (a far cry from the iconic pencil sketching in "Take on Me") and simply featured the band performing in a wide arena in Los Angeles.
A further two singles were released from Scoundrel Days. The aforementioned "Cry Wolf" reached No.5 in the UK, and "Manhattan Skyline" became the first single to not reach the top 10, peaking at No.13.
The album reached exactly the same chart positions as the band's debut Hunting High and Low, topping the Norwegian album charts and peaking at No.2 in the UK. However, overall British sales weren't quite as high, acheiving Platinum compared to 3 x Platinum for their debut.
Lyrics for I've Been Losing You