This bouncy synthpop tune was released as the third single from A-ha's third studio album Stay On These Roads. The song just failed to make the Top 10 in the UK, and it's a forgotten 80s gem that doesn't get the same airplay as the band's earlier hits. Although heavily synth-based, the track does feature a rocky edge to it at times with the use of electric guitar during the instrumental breaks.
The B-side to the 7 inch vinyl single featured the album version of "Hurry Home", which was track 5 on Stay On These Roads. This was also included on the 12" vinyl, alongside the album version of "Touchy!" and the "Touchy! Go-Go Mix" (8:20). 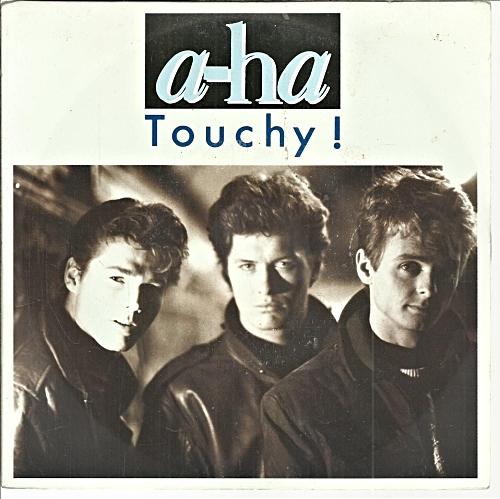 A CD single was also released which included "The Go-Go Mix", the album version of "Hurry Home" and and edited version of "Hunting High and Low".
The single sold particularly well in France, reaching No.5 and selling 500,000 copies. The single also reached No.6 in Ireland, No.8 in Belgium, No.13 in The Netherlands and Germany, No.18 in Switzerland and No.23 in Italy. 900,000 units were sold in total Worldwide.
In the UK, the single entered the charts at No.26 on August 21st 1988, making it the second highest new entry that week - Bomb the Bass entered the chart at No.20 with "Megablast/Don't Make Me Wait". A-ha climbed to No.12 the following week, and then up one more place to a peak position of No.11 on 4th September, before falling back to No.19 on the 11th Sept chart.
The bassline was created with that classic 80s synthesizer used on so many hits, the Yamaha DX7.
The video switches between black and white and colour imagery and mainly features the band on a beach and female swimmers. The word "touchy" features regularly, being written using pebbles and on a steamy window by Morten Harket near the start of the video. The word is also created by the bodies of a group of female synchronised swimmers on the sand. The first beach scene features each band member exiting from a different beach tent as a girl spies on them through a telescope. They are each wearing a black swimsuit with a white towel around their neck. They all bump into each other at the point where the three paths meet up.

The Sun Always Shines on TV

A-ha Photos from the 80s