You can't beat a bit of Alice Cooper, especially at a Halloween party, and this song really rocks!

The second and final track to be lifted from the album Constrictor features as part of the soundtrack to the horror film Friday The 13th Part VI: Jason Lives.

Released as a single in 1987, surprisingly, this blistering rock song failed to chart anywhere except the UK where it reached #80. The B-side featured a live version of School's Out. On the 12" single, a live version of I'm Eighteen was also included. 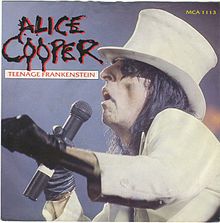 Bruce Springsteen Dancing in the Dark

Ozzy Osbourne Bark at the Moon