Now, this is one of those beautifully styled pieces of hardware that was very tempting to buy, but suffered from bad marketing. Externally, the console looked like a space craft, but internally it was, basically, a CPC Plus computer.

With a launch price of £99.99 and bundled with two controllers, a power pack and the racing game Burnin' Rubber,  the GX4000 seemed like a bargain in 1990, and was Amstrad's first and last attempt to grab a slice of the video game market.

However, with other 8-bit consoles already being established in the video game market, and the rise of the 16-bit consoles such as the Sega Mega Drive and Super Nintendo (SNES) and computers such as the Atari ST and Commodore Amiga, the new 8-bit console simply couldn't compete.

There were also other factors which led to the machine's quick demise. A lack of software (Amstrad lacked the funding to support the software houses) and little information about the console didn't help - there was little support from the tech magazines.

The games that were released for the system were, basically, CPC games which could be bought for under a fiver on cassette. Therefore, releasing them onto a cartridge and charging around £25 was never really going to work.

Just 27 titles were released for the console including some big titles such as Robocop 2 and Switchblade. However, many well-known games were also cancelled such as Kick Off 2 and OutRun.

It's a shame that the machine wasn't successful as, like another ill-fated 90s console the Atari Jaguar, it was a pretty decent piece of kit. The console was discontinued in 1991 with remaining Burnin' Rubber bundles being sold off for £29.99 in Dixons. 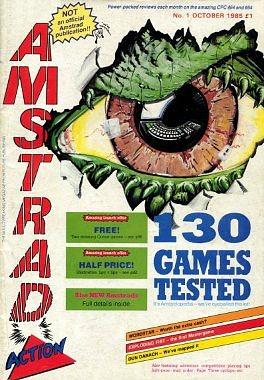 Amstrad Action was one of the only magazines to support the GX4000 console.