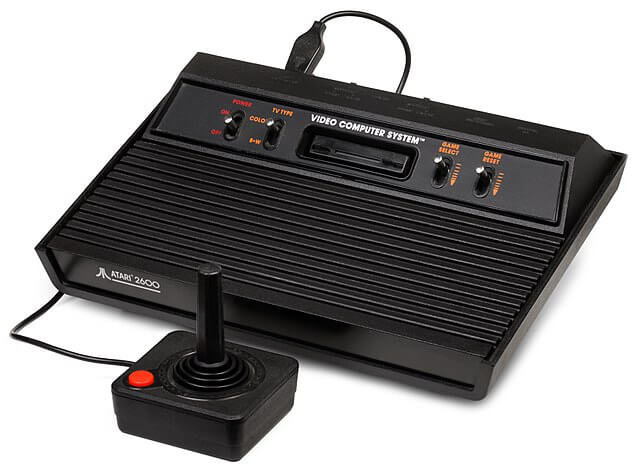 The Atari VCS/2600 was one the first video game consoles to popularise the use of cartridges (most consoles at the time had built-in games), and was responsible for helping to bring home video gaming to the masses, selling around 30 million units during its lifetime. Incredibly, games for the machine are still being produced today by hobbyists!
Sadly, the console is best-remembered by many for it's role in the notorious 1983 video game crash, after which Atari reported a staggering loss of $536 million - this led to the company being split-up and sold off. Two of the main causes were the huge commercial failures of the video games E.T. The Extra-Terrestrial and Pac-Man for the 2600, which were panned by the critics. The games were of such poor quality that customers returned the game cartridges in their droves!
One of the most successful and popular games for the system was the port of Space Invaders from Taito's arcade version in 1980.
The machine was first launched in North America on September 11th 1977, and then across Europe during 1978. It was originally named the Atari Video Computer System (VCS) until 1982. The introductory price was $199, which enabled many families to experience playing video games from the comfort of their homes for the very first time. $199 was actually still pretty expensive (equivalent to around $830 today), but was within the reach of hard-working families.
Indeed, the 2600 was part of a video game revolution, and was very different to the cheaper TV game systems around at the time such as the Binatone TV Master, Atari Home Pong and Nintendo's Color TV-Game. These had games built into the hardware, rather than a ROM cartridge slot, and many simply featured variants of the game Pong.

Planning for a console with multi-game support actually first started in 1975, but Atari were unable to build anything due to the unavailability of low-cost microprocessors that were powerful enough to use.
However, the release of the MOS Technology 6502 CPU was the solution Atari needed, although they decided to settle for the cheaper 6507, which was smaller and cheaper but also more restrictive in that it could only address 8kb of memory. It featured 12 memory-address pins (compared to 16 on the 6502) and ran at 1.19MHz on the 2600. Other home computers of the time used the standard 6502 chip.
The ROM cartridge slot of the 2600 was also restrictive as it only allowed for 4kb of external memory - the other 4kb was used for RAM and I/O chips.
The first prototype was designed by Joe Decoir in 1975, and was nicknamed "Stella", and this included the 6502 microprocessor. A second prototype was completed by March 1976, and this contained the cheaper 6502 CPU. It was Jay Miner (the "father of the Amiga") who helped design this one, and he took his cockapoo dog "Mitchy" to work with him every day - she even had her own I-D badge, apparently! Still codenamed "Stella", this second prototype also had a ROM cartridge slot. 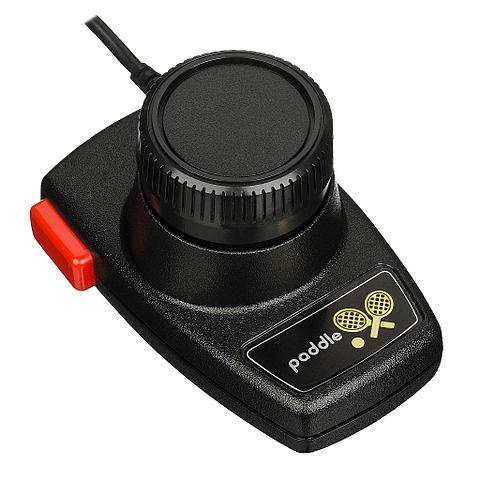 Atari faced competition in the form of the Fairlight Channel F, which was launched before the 2600 in November 1976 for $169.95, making it the very first programmable video game console that used ROM cartridges. It was originally named the VES, but after Atari launched the VCS, the name was quickly changed. The console only had half the memory of the 2600, and it's mostly inferior games proved no match for those on the 2600, which easily outsold it.
Due to the release of the Fairchild, Atari Inc.'s founder, Nolan Bushnell (who also invented Pong), felt under pressure to get the "Stella" prototype released to the public, but was short of cash. He decided to sell the company to Warner Communications, who provided a cash injection of $100 million. The first VCS consoles were shipped to retailers during November 1977.
The first VCS consoles were shipped to retailers during November 1977. It came with two Atari CX10 joysticks (which were later upgraded to the CX40 joysticks) and the cartridge game Combat. Another eight games were made available to buy.
Around 900,000 units were sold during 1977 and 1978, although this was viewed as poor sales, and led to financial losses for Atari. Bushnell took voluntary retirement from the company in 1978, and the Warner takeover led to their four best programmers leaving to form Activision - they were unhappy about the treatment of the staff by Warner.
The VCS sold a futher 1 million units during 1979, but Atari faced new competiition from the Magnavox Odyssey and Mattel Intellivision consoles.
The licensing and release of Space Invaders in January 1980, helped to shift a further 2 million consoles during 1980. Indeed, people were now buying the console just to play this game! The VCS became hugely successful, and had sold around 10 million units by the end of 1982.

During 1982, Atari launched the re-branded 2600 with a retail price tag of around $129 in the U.S. The all-black "Darth Vader" model was the first to feature the Atari 2600 badge. Other third party games developers began developing games for the system, and this led to the market becoming saturated with poor quality third party titles, as they tried to cash in. Companies included Imagic, Coleco, US Games, and Telesys, to name but a few. Some of the best titles were produced by Activision, and their first titles included Boxing and Dragster.
Along with Atari's own disastrous releases of the aformentioned Pac-Man and E.T. games, this led to the video game crash of 1983, with the public growing tired of purchasing poor quality cartridge titles, and not being afraid to return them. This hit many of the third party games companies pretty hard, forcing some to cease trading due to poor sales.
After the crash, the majority of games development was by Atari and Activision, which led to better quality titles being released. In 1984, Warner sold off Atari Inc's consumer division to Jack Tramiel. No new games were produced by Atari for around two years.
1986 saw another relaunch of the 2600, which was labelled unofficially as the Atari 2600 Jr. with the retail price slashed to under $50. By now, the internal workings of the machine were looking very dated (although the external facelift featured more slimline, modern styling), but the huge range of game titles and the new low price for the hardware helped the machine to continue selling until the early 1990s.
1987 saw a resurgence in the popularity of home consoles, with the launch of the Nintendo Entertainment System (NES) during late 1985 and 1986 being hugely responsible. Atari licensed and released many big titles, including Q*Bert, and third parties started developing games for the 2600 once more.
During the second half of the 1980s, the 16-bit Atari ST home computer became the most popular hardware for the company, and was vastly superior to the 2600.
Atari released their final games during 1989 and 1990. The 2600 was discontinued on January 1st 1992, along with the 7800 console and the XE range of 8-bit home computers.
It is estimated that around 30 million units of all models of the VCS and 2600 were sold in total. The console holds the record for being manufactured for the longest period of time - some 14½ years!

The 2600 needed to be plugged into a black and white or colour CRT TV set, and the American NTSC format TV's could display 128 colours, with a maximum of 4 per line. In the UK and Europe, the PAL TV sets could only display 104 colours. However, if your were unlucky enough to be living in France, here the SECAM TV sets could only display a measly 8 colours, which is the same as the Sinclair ZX Spectrum if you include black and white.
The playfield resolution was 40 x 192 pixels (NTSC) - 20 pixels were mirrored from the left side to the right side to achieve 40 pixels. The maximum resolution was actually 160 x 192, although some clever programming was required to combine playfield pixels with sprite pixels.
The graphics were pretty blocky compared to rival 8-bit home computers and consoles released during the 1980s, but the low pricing of the console made it a very tempting buy. 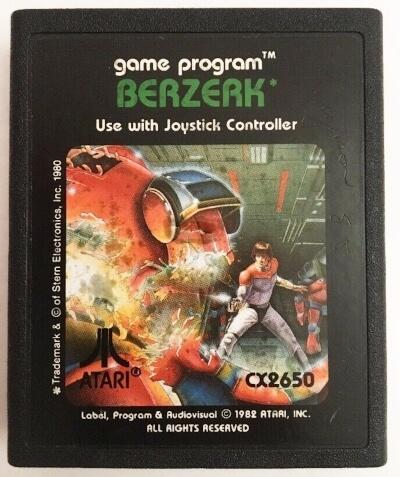 Berzerk was one of many games released by Atari

Five different main models were released with different casings. The very first release was the CX2600 (branded the Heavy Sixer" by Atari) which was the heaviest of all the models and featured six switches. 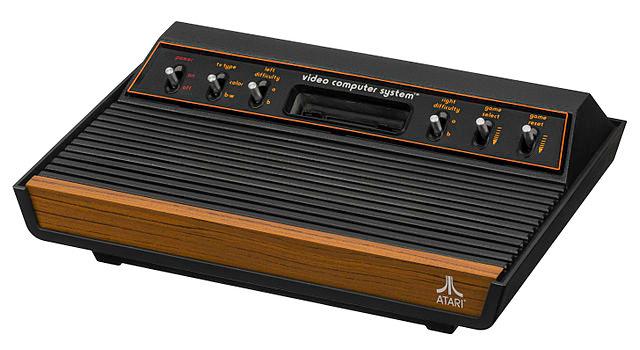 The second model (1978) was the CX2600 "Light Sixer" which looked similar at a first glance to the previous model, but was lighter in weight due to a thinner moulding which was more angled at the sides. 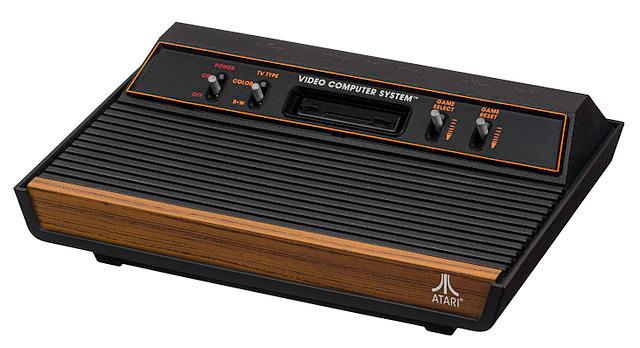 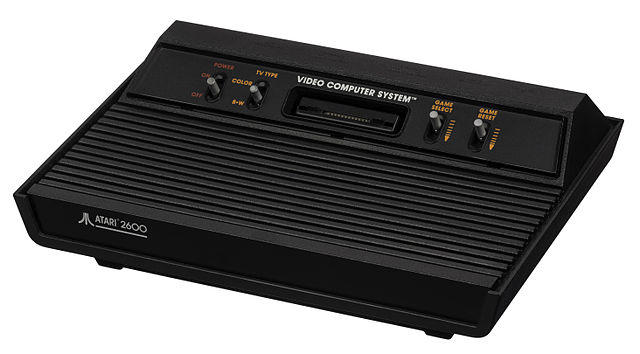 The fourth model (1982) was the first to named as the 2600, and was branded the "Darth Vadar" due to its all-black colouring, and it did not have the wood veneer. 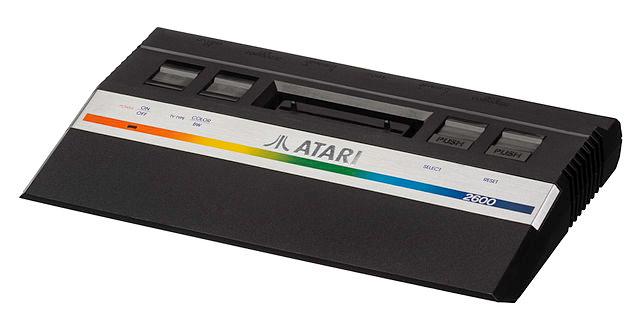 In 1986, Atari released its final model, the Atari 2600 Jr., which was significantly less bulky and more modern-looking.

The latest hardware model to be released by Atari is the Flashback 9 console, which features 110 built-in games based on the 2600 cartridge games, including Space Invaders, Frogger, River Raid and Pitfall. 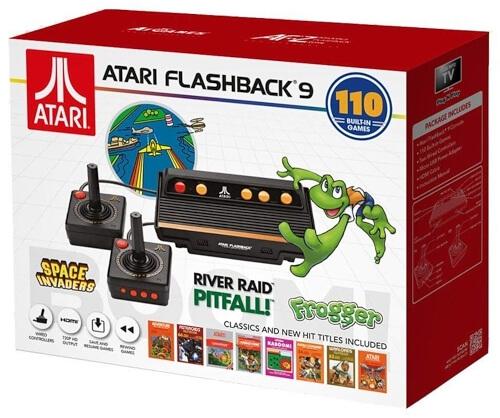