Launched in November 1982 in North America, the Atari 5200 was cheaper (and graphically better!) than other systems by companies such as Coleco and Mattel. Despite this, the console was a bit of a flop.

The advanced hardware was almost identical to that used in the 8-bit computer range, hence, many of the games on the machine look similar to those on the computers.

Atari's biggest blunder was making the 5200 incompatible with the 2600. The console couldn't play the huge amount of ROM games available for it's predecessor and gamers still wanted to play these games. Many of the games released for the machine were simply updated versions of 2600 games, and did little to demonstrate the 5200's capabilities. Atari also didn't plough enough money into developing new games for the machine.

Then we had the dodgy analogue joystick/keypad - it was just lousy! Add the fact that the video games market was in decline (it crashed in 1983) and you can see why the Atari 5200 was so unsuccessful.

After the recent marketing disasters with the release of both the E.T. The Extra-Terrestrial and Pac-Man games on the 2600 (see the 80s Video Games page), this was yet another nail in the coffin for Atari.

By Evan-Amos [Public domain], from Wikimedia Commons
The 5200 was regarded by many as an Atari 400 in disguise and included the same POKEY, ANTIC and GTIA chips. However, there were minor differences which prevented software being directly ported from a 400 to the 5200 without some adjustments. 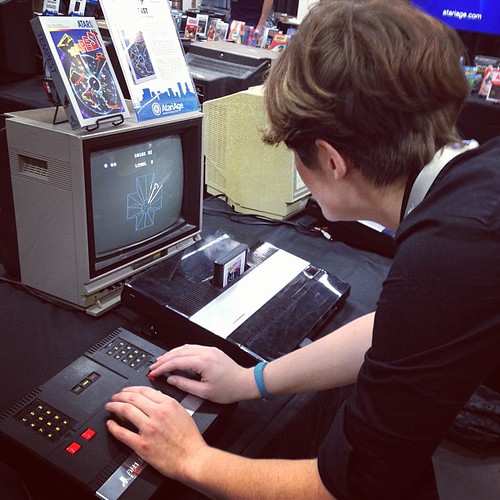 Simplyeighties.com is a participant in the Amazon Associates affiliate program. This allows us to earn fees from linking to products at Amazon.co.uk. 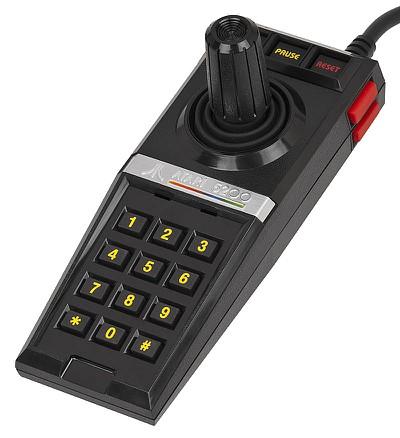 The non-centering analogue joystick was awkward to use and unreliable due to a rubber gaiter being used instead of springs to provide centering.
Let's take a look at the technical spec:
CPU: MOS Technology 6502C running at 1.79MHz
Graphics Chips: ANTIC and GTIA
Colours: 128 (16 hues, 8 luma) or 256 (16 hues, 16 luma)
Screen Resolution: 6 text modes and 8 graphics modes up to 384 x 240 pixels
Number of sprites: 8
RAM: 16KB 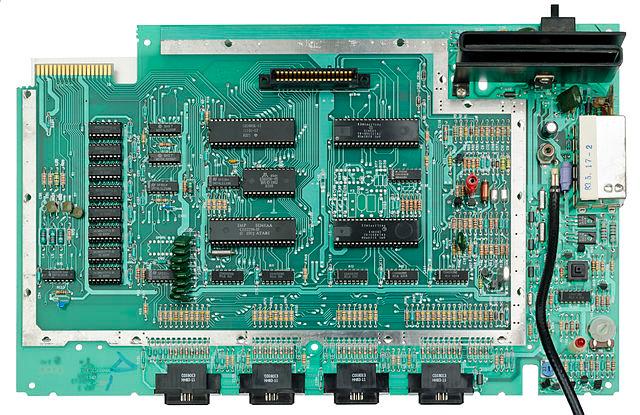 The Atari 5200 sold around 1 million units and was discontinued on May 21st 1984. The Atari 400/800 and the XL/XE series were basically the home computer versions of the console, which was another reason not to buy a 5200. They featured similar hardware but could load both ROM and cassette games, with the added benefit of being able to program your own using Atari BASIC.