On this page, I'm going to take a look back at the ill-fated Atari Jaguar. It has nothing to do with the 80s, I know, but I do like to include some 90s stuff on this site, too.

Released in 1993 in North America, and 1994 across Europe, the 64 bit console was ahead of its time. However, Atari were renowned for their marketing errors, and instead of the Jaguar dominating the fifth generation console market, it became a commercial flop due to a number of problems.

The main flaw with the system was a lack of gaming titles.
Put simply, this was a games machine with no games! Okay, there were a few, but I'll come back to that in a moment. A problem with the CPU's memory controller and a number of bugs in the UART (this is a receiver/transmitter that translated data between serial and parallel forms) left programmers scratching their heads, and software companies were reluctant to release titles for the machine. Reviewers were also describing the keypad controller as complicated to use. 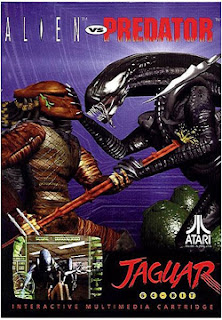 A small number of half-decent games were released for the Jaguar, including the first person shooter Alien Vs Predator - this received favourable reviews and became one of the biggest-selling games for the console. But there simply weren't enough decent titles to keep the public satisfied, and the majority of the game releases were from Atari Corporation themselves. Many of the games received poor reviews and there were also delays with releasing them. With all of these problems, Atari failed to convince third party game developers that the machine was going to be successful and well-supported.

When Sega and Sony released their own machines during 1995 (with lots of support from software companies) sales of the Jaguar slumped. Atari's final marketing campaign saw them claiming that they had the only 64 bit console. However, the truth is that the system was not a true 64 bit system, with the 32 bit CPU and GPU processors working in parallel to send control signals to the 64 bit graphics accelerator. Overall, less than 250,000 units were sold during its short life. The system was discontinued during 1996.

During the late 90s Atari were bought out by Hasbro, and the Jaguar gained support from developers who had previously created half-finished titles. The games were completed and released during the 2000's, along with many new titles. The console went on sale again in Game stores on the British high street during 2001, with a retail price of just £29.99. In 2007 the final machines were sold off for just £9.99 each, with games being sold for less than £1.

The system still has a cult following and the video clip features 20 game that defined the Atari Jaguar, and a couple of these were released after 1996. Here is the full list of titles in the video; 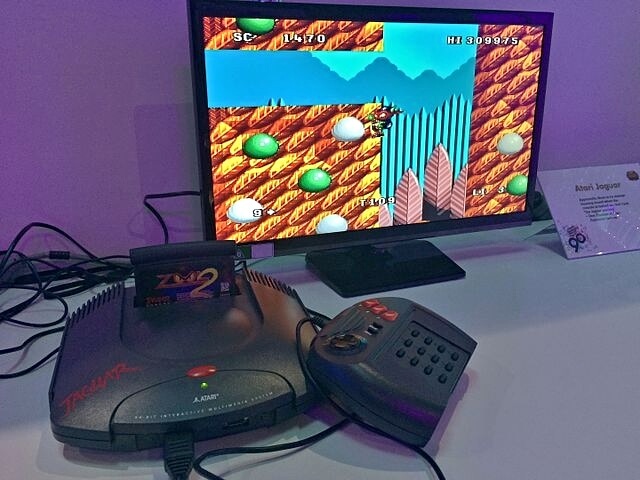 Playing Zool 2 on an Atari Jaguar. This is an enhanced version of a public domain (CC0) image by Philip Terry Graham https://commons.wikimedia.org/w/index.php?curid=43962969

8 Worst Consoles Ever Made