Facing a financial crisis after the infamous video game crash in 1983, Atari needed a successor to its 8-bit family of home computers to help revive its fortunes.
Fortunately for Atari, Commodore were having their own problems, not with sales, but with a conflict between the company's founder and CEO Jack Tramiel and chairman Irving Gould. The two largest shareholders had a blazing row over the role of Tramiel's sons within the company (he wanted to keep it in the family) and after a board meeting, Tramiel resigned and then made an offer to Warner Communications in January 1984 for their loss-making consumer division of Atari inc. This included the home console and computer gaming divisions which were losing around $1million per day at the time. The new Atari inc. division employed Shiraz Shivji and his team of six engineers who had all been working with Commodore under Tramiel. Shivji became the Vice President of research and development.
Atari inc. was merged with Tramiel's own company Tramiel Technology Limited (TTL) and became Atari Corporation in July 1984.
During the design stage, Atari were approached by Microsoft who suggested they use their forthcoming Windows as an operating system. However, it would be around two years before it was ready, so Atari opted for the GUI-based Crystal, which then became GEM.
It took just five months (from July to December 1984) to build a prototype which was presented at the Las Vegas Consumer Electronics Show (CES) in January 1985. The 520ST was launched in June 1985 with a price tag of $749.99 with a monochrome monitor and $999.99 with a colour monitor. Many wrongly believed that ST was simply the initials of Jack's son, Sam Tramiel. However, ST actually stands for Sixteen/Thirty-Two which refers to the Motorola 68000's 16 bit external bus and 32 bit internals.
Atari 520ST
Launch Date: June 1985
Price: $799.99 with monochrome monitor, £999.99 with colour monitor
CPU: Motorola 68000 @ 8mhz
Ram: 512k
Graphics: 320 x 200 - 16 colours
640 x 200 - 4 colours
640 x 400 - monochrome
Sound: Yamaha YM2149F which was a slightly modified version of the AY-3-8910 by General Instruments. The latter was used in the Amstrad CPC, ORIC 1, ZX Spectrum 128/+2/+3 , Intellivision and Vectrex game consoles.
Storage: External SSDD 360k floppy disk drive
OS: Tramiel (TOS) / GEM. The first models came with the OS on disk.
Superceded by: Atari STe in 1989

By Blake Patterson from Alexandria, VA, USA (new Atari ST mouse to go with the setup) [CC BY 2.0], via Wikimedia Commons
Although Tramiel and Shivji had visions of building a true 32 bit machine, they eventually opted for a 16/32, where the 32 bit processor communicates through the 16 bit external bus. Apparently, the Motorola 68000 was actually a little faster than the National Semiconductor true 32 bit chip which Atari had originally planned to use, but also cheaper.
The aim was to build a powerful computer and sell it at a budget price. Despite many cost-cutting measures during its build, the ST could outperform its rivals such as the Apple Macintosh, and was marketed as a rival business machine.  However, the fast colour graphics meant it was also perfect for gaming, and leading game software companies were quick to utilise the ST's power. 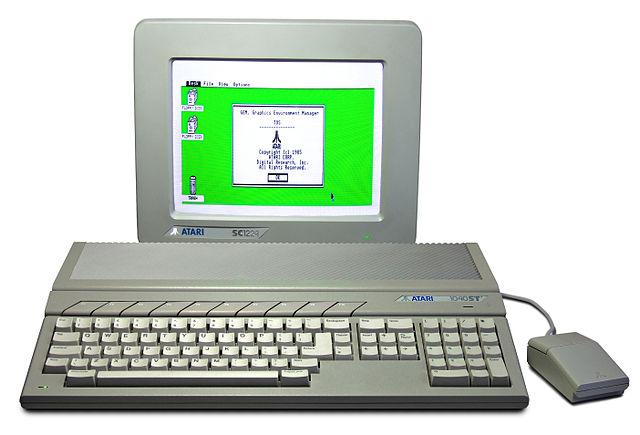 The ST was also a big hit with musicians (forgive the pun) despite having a pretty basic three voice Yamaha soundchip. It was the only computer available with built-in midi ports, and could be used as a low-cost sequencer. There was a comprehensive range of software available, both commercial and shareware.
However, the ST's biggest market was home computer users and gamers, and the conversion of the back catalogue of classic Atari coin-op games to the machine helped sales tremendously. The ST was, however, popular as a business machine in some European countries such as Germany, especially for CAD and desktop publishing due to its high-res monochrome display.

Photograph by Rama, Wikimedia Commons, Cc-by-sa-2.0-fr [CeCILL or CC BY-SA 2.0 fr], via Wikimedia Commons
As mentioned, the colour graphics (320 × 200 with 16 out of 512 colors, or 640 × 200 with 4 out of 512 colors) meant the ST was ideal for gaming, but unlike the Amiga or Atari's own 8-bit machines, it did not have hardware support for sprites and it's soundchip was inferior to the Amiga's Paula chip. Nonetheless, it was slightly faster than the Amiga and initially cheaper to buy. The ST was particularly popular in Europe, and the simple, but ingenious "Power without the price" slogan undoubtedly helped to boost sales.
Atari initially used single-sided floppy disk drives that could store up to 360 kB. Later drives were double-sided and stored 720 kB.
Initially, the Atari ST was the leading 16 bit home computer, and helped to revive the fortunes of Atari. However, it's main rival the Commodore Amiga was quickly gaining ground.

By Marcin Wichary (originally posted to Flickr as [1]) [CC BY 2.0], via Wikimedia Commons
In 1986, Atari released the 1040STf and 1040 STfm models, and this was the first personal computer to feature 1MB of RAM. The 1040 models were larger than the original 520ST to cater for an internal power supply and double-sided floppy drive - previously these were external. The mouse and joystick ports were moved from the right of the machine to underneath the keyboard. Personally, I always found this very awkward and preferred the original position.
The STfm included a modulator allowing you to plug the computer into a TV, making it cheaper to buy.

Side views of the Atari 520ST. Image is in the public domain.

The age old debate about which machine was better still rages on, and believe it or not, there are still vicious exchanges between owners on Youtube and in online forums. In general, the Amiga was a superior gaming machine compared to the original ST's, but not all of the games written for the Amiga were better - OutRun is one such example. The Yamaha soundchip was a big letdown on the Atari which could not rival the Amiga's Paula chip. However, the ST was superior as a business machine due to its Hi-res graphics mode, which the Amiga did not have. The ST was also ideal for controlling midi instruments thanks to built-in midi ports. The Amiga's Motorola 68000 CPU also ran slower at 7.16mhz compared to 8mhz on the ST.
One of the main advantages the Amiga had over the ST was the fact that it could display 32 colours at 320 x 256 from a palette of 4096, compared to the ST displaying a max of 16 colours at 320 x 200 from a palette of 512. The Amiga also had the advantage of eight hardware sprites and a blitter chip.
However, there were a good many of the earlier games (particularly in 1985) that were developed on the ST and simply ported to the Amiga, which took no advantage of the Amiga's better graphics. Many of these titles played faster on the ST. Some 3D games and games that used polygons usually ran faster on an ST, too. Falcon by Spectrum Holobyte is one such example.
With the Amiga eventually winning the battle as the best-selling 16 bit home computer, Atari released its 520STe and 1040STe (enhanced) models in late 1989. The new models included an improved palette of 4096 colours (previous models had 512) and a new Blitter chip (which the Amiga already had) which could move graphics sprites and blocks of data around in RAM a lot faster. The new 2 channel soundchip could play 8-bit stereo samples.
However, this was too little too late for Atari and little use was made of the extra features of the STe by games software houses. Some older games would not work on the new machines, and any games programmed to utilise the extra features of the STe models would not work on the previous models. Therefore, many software houses felt it wouldn't be profitable to invest in creating games solely for the STe. It was also risky, not knowing how many STe computers were going to be sold.
Although sales of the ST slumped in the U.S., in Europe they remained healthy. The main reason for this was that Atari had access to an array of ex-Commodore workers who could set-up many distribution channels, which is something they did not have in the U.S.

By Francisco Rodrigo Escobedo Robles (Own work) [GFDL or CC BY-SA 3.0], via Wikimedia Commons
Released in 1991, the Mega STe was the penultimate model to be built before Atari started to concentrate on it's ill-fated Jaguar console. The new model was basically a business version of the STe, with a TT case and a hi-res monitor. A feature unique to the Mega STe was it's switchable (with software) CPU speed. For compatibility with older software, the user could choose to run at 8mhz. For faster processing, the machine could run at 16mhz. The majority of the internal workings were the same as the standard Ste, and it still had the same blitter and sound chips, TOS operating system (the newer version 2) and display modes.
A 20 MB hard drive called the SH204 could be purchased as an optional extra.
The later Mega 2 and 4 models featured a custom blitter co-processor to improve the speed of some graphics operations.
75% of sales of the Mega STe were in Europe, with Germany becoming the strongest market.
The final Atari model, the Falcon, was released in 1992. Although it had an ST case, it was a very different machine and featured a Motorola 68030 CPU.
Atari Mugs 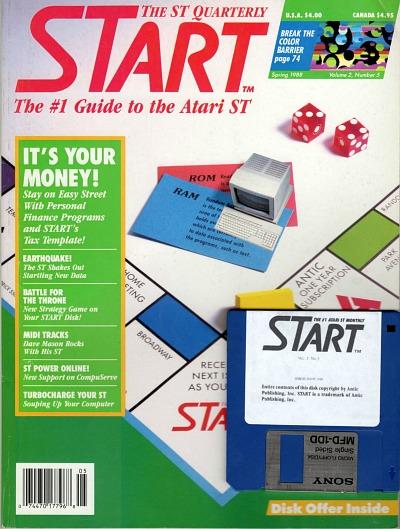