Firstly, I need to mention that the official video (above) is rather on the dark side visually, and so you will probably need to add some brightness just to see what the heck is going on! However, it's not the most exciting video to come out of the 80s, and consists mainly of close-up shots of the band members faces, which are lit-up by a flickering flame, and some additional crashing waves and fireworks. Therefore, I have also added a more interesting and brighter video of a 1989 performance of the song further down the page.
Thankfully, the song is very memorable. It's a moving and melodic love song from 1989, which gave The Bangles their first and only No.1 single in the UK. In the U.S., the song was the band's second No.1 - "Walk Like An Egyptian" had reached No.1 during 1986. The single was lifted from the album Everything, which had been released during October 1988.
"Eternal Flame" was penned by band member Susanna Hoffs, alongside the songwriting duo Billy Steinberg and Tom Kelly. The duo also wrote (or co-wrote) the hit 80s songs "Like A Virgin" for Madonna, "True Colors" for Cyndi Lauper and "So Emotional" for Whitney Houston".
The song's title comes from two different eternal flames. The first is from when The Bangles were enjoying a private tour of Graceland. They noticed an eternal flame on a shrine to Elvis Presley, although it wasn't lit due to the rain. The second comes from a synagogue at Palm Springs in California, where Billy Steinberg grew-up.
The tune itself was influenced by The Beatles, with the harmonies and the arrangement resembling some of their work. Sadly, the band split soon after recording the song. It starts like a lullaby and the triangle is very noticeable. Kettle drums and strings add drama about a minute into the song, although it never really sounds like an 80s power ballad until two and a half minutes in, when the extra piano and big drums finally kick in.
The single was released on 7 inch and 12 inch vinyl and also a cassette single - remember those? The B-side featured the track "What I Meant To Say" which was written by band members Vicki and Debbi Peterson.

The single entered the UK singles chart at #81 on 29th Jan 1989, while Marc Almond and Gene Pitney were at No.1 with "Something's Gotten Hold of My Heart". The song spent many weeks outside the Top 40, before eventually reaching the prestigious top spot on 9th April, replacing Madonna's "Like A Prayer" which fell to No.3.
The song remained at No.1 for four weeks, holding Simply Red at No.2 for three weeks with their ballad "If You Don't Know Me By Now". During the fourth week, Kylie was at No.2 with "Hand On Your Heart". She claimed the No.1 spot on 7th May, with The Bangles falling to No.2.
The single became the third best-selling of 1989 in the UK. It also topped the music charts in nine countries in total. In the U.S., the song spent just one week at the top, replacing Mike + The Mechanics "The Living Years".
Other singles released from the Everything album were "In Your Room", "Be With You" and "I'll Set You Free". 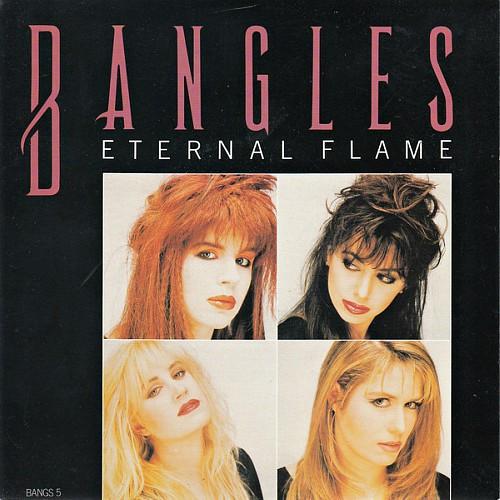 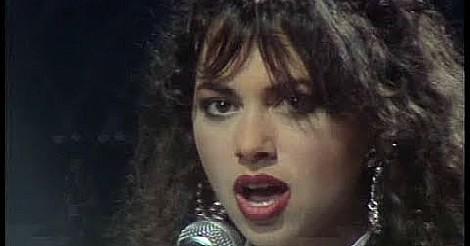 Atomic Kitten's Version
Girl band Atomic Kitten released a successful cover of "Eternal Flame" in 2001, which reached No.1 for two weeks in the UK selling over 400,000 copies.