Battle City is a multi-directional tank shooter game that is based on the 1980 video game Tank Battalion released by NAMCO to the arcades - there was an MSX port, too. In 1985, a new version called Battle City was released for the NES and Sharp X1 by NAMCO. As with most games from the 80s, the gameplay is easy to understand but hard to master.
You will need to allow Flash to run to play the game. Press H to start - if the game doesn't start then press H again as this also pauses the game. The controls are displayed on the game itself below. Shoot at the enemy tanks and avoid their fire. The player must destroy twenty tanks in each round and also protect their base. If your base is destroyed or you lose all your lives then the game is over. Please not that your fire power can also destroy your own base - so beware!
If you select a two player game, both players work together to defend their base. In a solo game, four tanks will appear on screen at any one time. However, in two player mode, six tanks will spawn on screen.
There are 35 stages. The first level starts with just brick walls that are easily destroyed. As the player progresses, steel walls, water and bushes will also appear on the map. Steel walls can only be destroyed by collecting 3 power-up stars. Tanks will be able to hide behind bushes. Enemy tanks become harder to destroy with each level, with some requiring up to 4 shots to destroy them.
You can also create your own levels using the construction mode.
Play Battle City at Classic Games Arcade 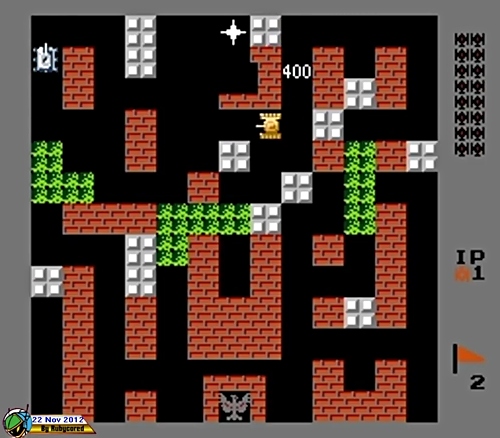