BEASTIE BOYS IN THE 80S

The American hip hop/rap rock group were established during 1981, although their original sound was more hardcore punk than hip hop. After touring with Madonna in 1985, the band released their debut LP Licensed To Ill the following year, and they've now sold around 40 million albums worldwide, making them one of the most successful and longest-running rap and hip hop groups in the World. 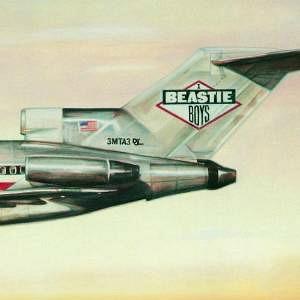 Chart positions shown are for the U.S. and UK respectively

"(YOU GOTTA) FIGHT FOR YOUR RIGHT (TO PARTY)"

This was Beastie Boys breakthrough record, and it's one of those tracks that, as a teenager, you would have belting out of your ghettoblaster just to annoy the hell out of your parents and/or neighbours. Unfortunately, I only had a cheap Saisho ghettoblaster, so it was pretty hard to pump up the bass on  that piece of junk!

Many people failed to realise that this song was actually a parody of attitude and party songs, and it was taken at face value by many listeners. Watching the video kind of makes you realise that the guys aren't being serious about the attitude thing. In fact, Beastie Boys hate the song so much they haven't performed it since 1987, apparently!

Fight For Your Right reached #7 in the UK singles chart in February 1987 and was a #1 in the US. It was taken from the 9x Platinum (US) album Licensed To Ill, which remains the band's most successful album. 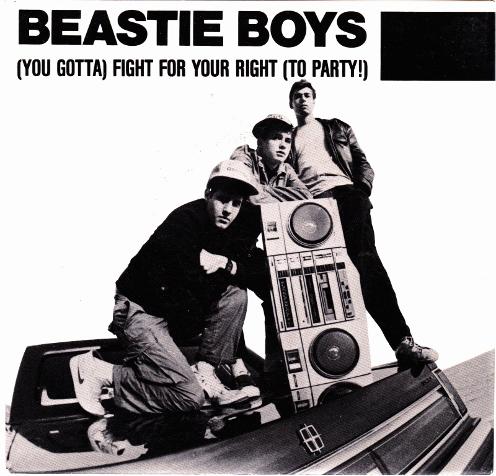 (You Gotta) Fight For Your Right (To Party) - Vinyl Sleeve Front

I was fascinated by the opening to the video (which shows crashing waves at Long Beach in New York) which almost had me thinking I was watching an 80s relaxation video. That is, until a bikini-clad girl releases her ice cream out of the wrapper in a suggestive manner, and then, in typical Beastie Boys style, all hell breaks loose!

Released in September 1985, She's On It was the debut single from The Beastie Boys and reached #10 in the UK after a re-release following the success of Fight For Your Right in 1987. The song featured on the soundtracks to the movie Krush Groove, and among the other 80s artists to feature on the album were Chaka Khan, Debbie Harry, LL Cool J and Gap Band. The song was not commercially successful in America. 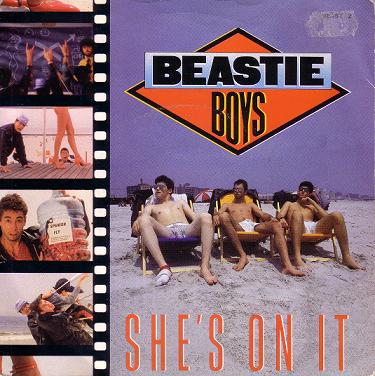 Reaching #14 here in the UK, this sixth single from Beastie Boys debut album was the last track to reach the Top 20 until the release of Sabotage in 1994, which peaked at #19. The song includes guitar work from Kerry King, the guitarist with thrash metal band Slayer.

No Sleep Till Brooklyn was later included on the soundtrack to the 1991 film Out For Justice which starred Steven Seagal as a long-serving police detective. More recently, the track was used in the opening to the 2010 movie Cop Out (Starring Bruce Willis) and in adverts to promote the 2013 MTV Music Video Awards.
Morris Minor and the Majors parodied the single with their amusing No.4 hit "Stutter Rap (No Sleep Til Bedtime)". 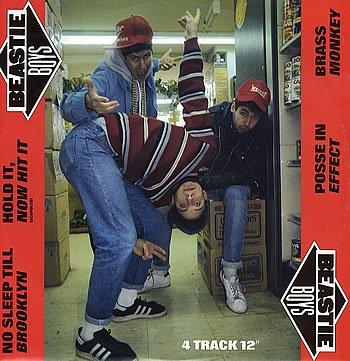 Girls was the final single to be lifted from License To Ill and was a pretty short track, lasting little over two minutes. The song was moderately successful, peaking at #34 in the UK. Now, I'm pretty certain I remember the B-side being played on the radio more than the A-side. I can find no reference to the single being released as a double-A, so maybe the people in charge of the playlists at Radio One just preferred She's Crafty? 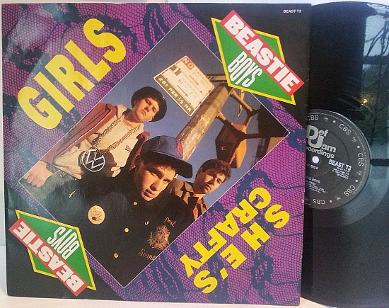