BELINDA CARLISLE "CIRCLE IN THE SAND"

"Circle in the Sand" was the third single release from Belinda Carlisle's second studio album Heaven on Earth, and became the American singer's third consecutive top ten hit from the album in the UK, U.S., Canada and Ireland.
The single entered the UK singles chart at No.42 on 1st May 1988, making it the seventh new entry that week, and reaching No.4 on 28th May for one week, spending a total of 11 weeks in the UK Top 100.
The song reached No.7 in the U.S., No.5 in Canada, No.9 in Germany, No.6 in Ireland, and No.22 in The Netherlands.
"Circle in the Sand" was penned by Rick Nowels and Ellen Shipley, and produced by Nowels. The duo wrote numerous songs on the next two albums Runaway Horses and Live Your Life Be Free, and also wrote "Heaven is a Place on Earth".
Thomas Dolby provides extra keyboards, and electric guitar is played by John McCurry.
The video was directed by Peter Care, who also directed Carlisle's 1989 video "Leave A Light On". It makes good use of 80s video effects, and features moving imagery (such as crashing waves and Belinda herself) displayed on sheets pegged onto clothes line. The video is set on a beach (as you would expect!), and Belinda can be seen walking along the beach, lying down on a blanket on the sand, and sitting on a chair.
Released on the Virgin record label, The UK, European and Australian single releases featured mixes by William Orbit. The B-side of the 7" vinyl (VS 1074) featured the Seaside Mood Groove Mix (3:51). This was also included on the 12" vinyl (VST 1074), along with Beach Party Mix (7:50). The CD single included both these mixes, plus an extra track Sandblast Multi-Mix, which included the songs "Heaven is a Place on Earth" and "I Get Weak".
The US and Canadian releases were released on the MCA label, and also included a cassette single. The B-side featured the track "We Can Change". The remixes were not released here.
"Circle in the Sand" is played on Los Santos Rock Radio in the video game Grand Theft Auto V.
If you're a fan of deep house music, you may like the Tennebreck Remix on Soundcloud.
The lead single from the Heaven on Earth album, "Heaven is a Place on Earth", was a chart-topper in numerous countries including the UK and U.S., with the second single "I Get Weak" reaching No.10 in the UK and No.2 in the U.S. 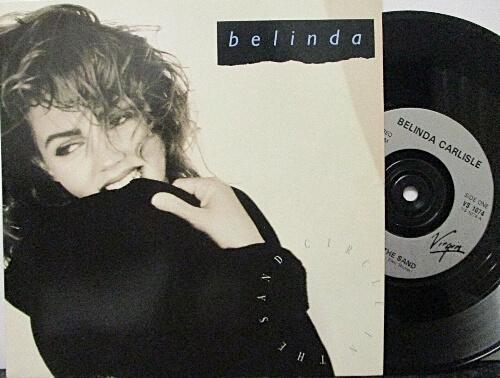 Lyrics for Circle in the Sand