If, like myself, you still have frequent urges (to go back to the 80s, that is!), and you yearn for a mighty sax solo, a Phil Collins drum break, or excessive reverb, then you're going to thoroughly enjoy this video!
For those of you who grew up in the the greatest decade ever, (chances are you did if you've landed on this page) you can be forgiven for thinking to yourself "Who the heck are Ben and Jensen?". Well, until today, I had no idea either. So I'm sure you're dying to find out who they are, exactly?
Well, they are comedy actor/director Ben Giroux and hip-hop songwriter/artist Jensen Reed, who have amassed over 100 million Youtube views with their comedy hip-hop videos. In 2017, they released their "Back to the 90s" music video, which amassed 95 million views on Facebook and charted at #11 on the Billboard charts in the U.S. 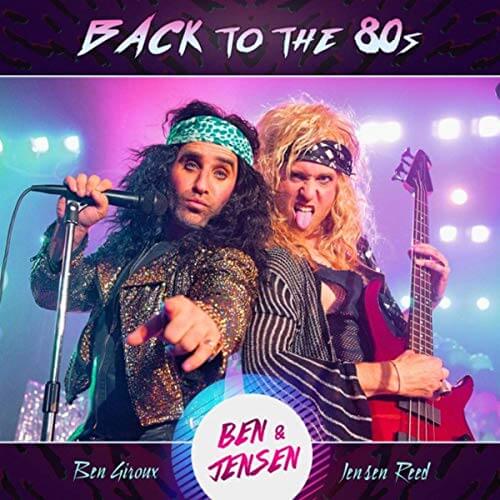 On August 26th 2019, after two years of hard work, Ben and Jensen released their opus music video "Back to the 80s", that covers the most, like, totally rad decade ever! It's a truly epic parody celebration of the entire 80s decade, which features their alter ego faux hair band: WET LEATHER.
Now, the duo are not wrong when they use the often over-used word "epic". The video is a truly awesome and creative piece of work which is packed to the rafters with references to the music, films, cartoons, TV shows, toys, computers and food we all loved back in the 80s. The video answers the most cliched, rage-inducing question asked by young people today "Like, what did people even DO back then?".
"Hold my fruit punch!". You're jaw will be dropping to the floor when we show you in the most spectacular way, young person, with our totally rad parody video!
I have to say that the lyrics are truly hilarious, and the line in the chorus "Take me back tonight, my pants are really tight" had me splitting my sides - and almost my pants, although they're not too tight these days, thankfully, particularly as gravity has done its finest work on my gonads. Although it is obviously aimed at an American audience, as a Brit, there is still so much here that I can relate to and chuckle about.
Sometimes when reviewing comedy videos I find myself struggling to find the joke, and, therefore, having to be polite so as not to upset the creators. But seriously, this is truly excellent work, and it's the funniest and most creative 80s parody video I've ever seen on Youtube. I sincerely hope these guys gain another 100 million views.

According to the duo, "Back to the 80s" took over two years to create, featuring 50 custom sets and multiple iconic vehicles from the 80s -- filmed over the course of six months. Well, it shows, and may I congratulate you both for the amazing time and effort you put into this.

All that's left for me to say is hold on to your mullets and enjoy this like, totally awesome epic video, dude!