This lively action-comedy was the film that featured Eddie Murphy at his best, and remains in the Top 30 for all-time top-grossing films. Raking in around $234m, only Ghostbusters took more money at the Box Office during 1984

Directed by Martin Brest, the plot revolves around the heedless Detroit detective Axel Foley (played by Eddie Murphy). The film starts with Axel trying to catch cigarette smugglers in a sting operation, but it goes pear-shaped when two uniformed cops show-up which makes his boss, Inspector Douglas Todd, rather unhappy.

In the next scene, Axel's former partner in crime Mikey Tandion (played by James Russo) breaks into his apartment and explains that he's working as a security guard in Beverly Hills. The duo go for a night out together, get legless, and then return to the apartment,. Two thugs turn-up to spoil the fun, knocking Axel to the ground and leaving him unconscious. They question Mikey about some missing German bearer bonds before murdering him.

Axel decides to investigate the murder, but is refused the assignment because of his close friendship with Mikey. So Axel pretends to take a vacation in Beverly Hills, but actually intends to solve the crime. He locates a friend of Mikey, Jenny Summer, and discovers that Mikey's boss is Victor Maitland, a local art dealer. When Foley questions him about Mikey, Victor's bodyguards throw him through a window - pleasant people!

Foley is arrested for a brief period and after he is released, Sgt. John Taggart and Detective Billy Rosewood are assigned the task of following Foley by Lt. Andrew Bogomil. Foley immediately goes back on the trail of Mikey's kilers and makes his way to one of Maitland's art warehouses where he starts to suspect that he is involved in Mikey's murder.

Bogomil wants to know why Axel is still bothering Maitland. He responds by explaining that he has a hunch about Maitland being a drug kingpin, after discovering boxes of ground coffee that he believes are being used to mask the smell of cocaine from sniffer dogs at customs.

Bogomil believes him, but Police Chief Hubbard isn't having any of it and tells Rosewood to drive Foley to the airport. However, Axel convinces Rosweood to drive him and Jenny back to the warehouse where they break in and discover bags of cocaine. Before they can show Rosewood, Maitland and his associates catch the duo. Maitland kidnaps Jenny and commands his associates to deal with Axel. Fortunately, Rosewood manages to rescue him.

Axel convinces Sgt. Taggart to bring Maitland to justice and he sends Rosewood to assist Axel with rescuing Jenny. Bogomil also finds out about what Axel has discovered, and calls for backup after receiving reports about gun shots at Maitland's mansion.

A massive gunfight at the mansion kills most of Maitland's associates, and Axel kills Maitland's right-hand man Zack, who murdered Mikey. Maitland appears using Jenny as a shield, but when he spots Bogomil arriving, Jenny catches him off-guard and manages to break free. Maitland is shot dead by Foley and Bogomil.

Eddie Murphy is a complete natural at playing the role of the cheeky, fast-talking and foul-mouthed cop Axel Foley. The fast-paced, edge of your seat action scenes, combined with a big dollop of comedy from both Murphy and the bumbling cops sent to follow him, help to turn what could have been a very dark and serious movie into a very entertaining, more light-hearted film. Definitely not one to watch with the kids and I'm not a huge fan of foul language, but certainly one of the better movies of the 80s. 8.5 / 10 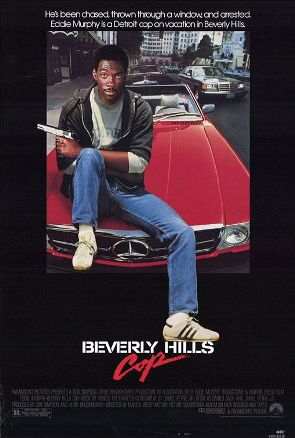