"When The Going Gets Tough, The Tough Get Going"

Whenever I hear this song on the radio, I simply can't get "go and get stuffed" out of my head. And that's thanks to a certain Radio One DJ (possibly Steve Wright?) having fun with deliberately misquoting the lyrics - thanks for that!
Billy Ocean has achieved success with numerous top ten singles, but this was his only chart topper in the UK. The song featured as track 1 on the soundtrack to the romantic adventure film The Jewel Of The Nile, which was the sequel to the 1984 movie Romancing The Stone. 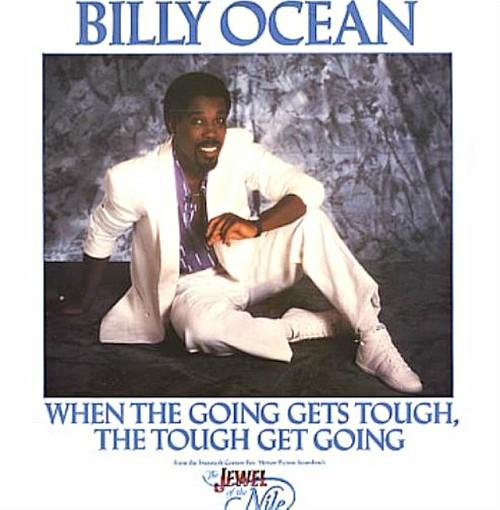 The single was also included on Billy Ocean's own album Love Zone. Three further tracks were also released as singles; "There'll Be Sad Songs (That Make You Cry)", "Love Zone" and "Love is Forever".
The video above is the official one from BillyOceanVevo, and features a performance on Top Of The Pops in the UK during 1986. The original video was actually banned in the UK, and you can see this further down the page with more info on the ban.
"When The Going Gets Tough..." entered the UK singles chart at #28 on 29th Jan 1986, quickly climbing to No.6 the following week and then claiming the prestigious No.1 spot on 2nd Feb, pushing "The Sun Always Shine On TV" by a-ha down to No.2. The single remained at No.1 for four weeks. During the second week, Ocean held off Madonna's "Borderline". In week three, Su Pollard's "Starting Together" was kept in second place (thank you, Billy!) and during it's fourth and final week at No.1, it was Diana Ross with "Chain Reaction" at No.2. Ross did, however, claim the top spot the following week (2nd March 1986) with Ocean falling to No.2.
The song was also a chart topper in Australia, Belgium, Canada, Holland, Ireland and Norway, and reached No.2 on the Billboard Hot 100 in the United States.
Four songwriters can take credit for the track, Barry Eastmond, Wayne Braithwaite, Mutt Lange and Billy Ocean himself.
The title of the song was actually inspired by a line in the movie by Kathleen Turner as Joan Wilder. She says to Jack (Michael Douglas) "When the going gets tough, the tough...well, I don't know what the tough do".

Four versions of the song were included on the 12" vinyl release, and these were an Extended Version (5:43), 7" version (4:08), Club Mix (7:35) and Instrumental (5:12).
Here is the original banned video which features Billy performing on a stage with musicians. It includes the stars from The Jewel of the Nile, Michael Douglas, Kathleen Turner and Danny DeVito having fun dressed in white tuxedos as lip-syncing backing singers. DeVito later takes to the stage and pretends to play the saxophone solo.
So why was the video banned?
Well, the three actors were not members of the Musician's Union, but I believe it was DeVito's faux saxophone playing that really upset them. However, as with Frankie Goes To Hollywood's "Relax", the ban would only have a positive effect on the chart position of the song, giving ocean his only No.1 in the UK. 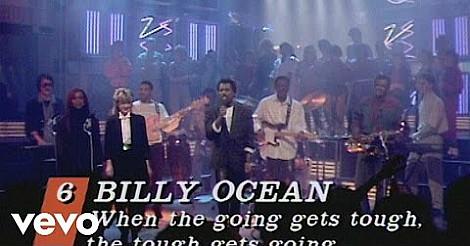 Lyrics for When The Going Gets Tough

Get Outta My Dreams, Get Into My Car