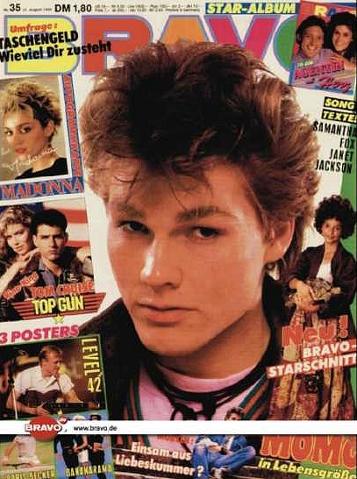 BRAVO MAGAZINE IN THE 80S

Bravo is a hugely-popular teen magazine that was first published in 1956, with its very first issue featuring Marilyn Monroe on its cover. The German-based publication is distributed across Europe in German-speaking countries such as Germany (of course!), Czech Republic, Poland etc.

During the 1980s, the magazine's main focus was on pop culture, with a well-known singer often gracing the cover of each issue, and quite a high proportion of these were British. Occasionally, a TV or movie star would appear instead. Don Johnson was particularly popular, although retro heartthrobs such as James Dean or Elvis Presley would sometimes feature.

Interestingly, the magazine features a controversial section entitled "That's Me!" which used to feature nude teen models from the age of 14. The age was increased to 16, although this is still illegal in some countries.

During the 1970s and 80s the magazine was easily selling 1 million copies of each issue, with the figure peaking at around 1.4 million during the 1990s.

Here is Adam Ant with his iconic white stripe across his face gracing the front cover of an issue from August 1981. Inside are a diverse range of posters featuring Kim Carnes, Iron Maiden, Adam & The Ants, Tommi and John Wayne.

By 1983, the magazine was looking even more 80s with its multi-coloured title. However, the pop industry is a fickle business and by 1984 it was now Paul Young who was flavour of the month. This issue also features German pop star Nena and Frankie Goes To Hollywood who gained a big German following.

By 1989 the teen-pop sounds of Stock, Aitken and Waterman were dominating the music charts and Jason Donovan featured on the front cover in this issue from October 1989. Inside are Posters of ex-Frankie frontman Holly Johnson, the extraterrestrial puppet ALF and French actress Sophie Marceau. Boy band Bros featured in the stickers section, along with the iconic 50s film star James Dean, Batman and pop star Sandra.

Here's an issue from 1991 featuring the one and only Chesney Hawkes!

Bravo is still being published today, although the circulation figures are, as you would expect, considerably lower at around 250,000 per month. 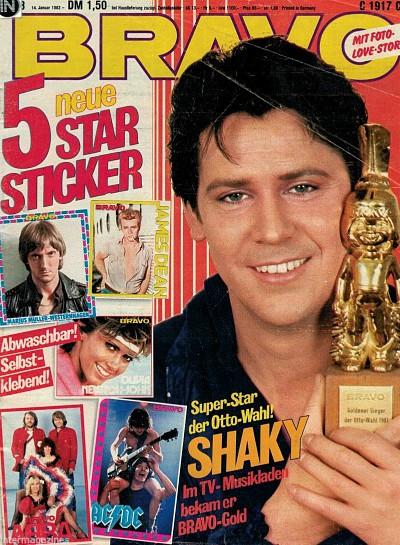 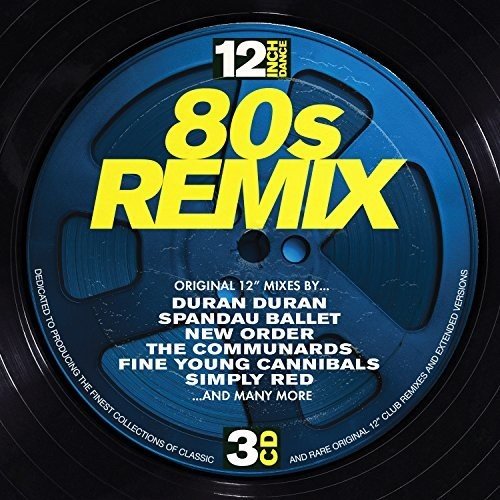