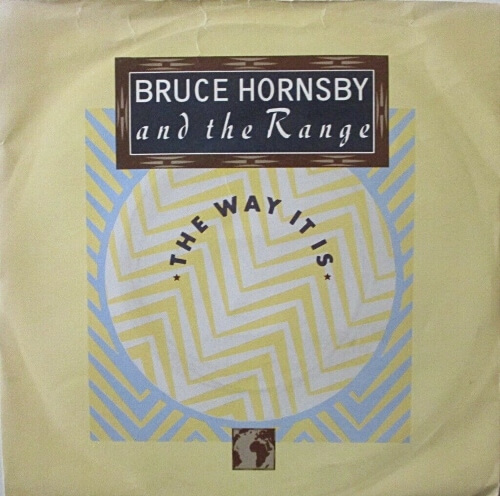 Bruce Hornsby and the Range "The Way It Is"

I remember that "The Way It Is" received a lot of airplay here in the UK, but, surprisingly, never made it into the top 10. The piano-led song was released by the American rock band Bruce Hornsby and the Range as the follow-up to their debut single "Every Little Kiss".
Both musically and lyrically, this is a very original song when compared to many of the other hits of the time, lacking certain aspects of many pop songs, such as a standout chorus or any changes in tempo. It basically sounds pretty consistent throughout, and was, therefore, aimed at a more adult audience, with piano being the main instrument, combined with jazz influences.
"The Way It Is" was released as the title track from the album, which reached No.16 in the UK and No.3 in the U.S.

The single was released on vinyl 7 inch and 12 inch formats. The B-side included a track penned by Bruce and his brother John entitled "The Red Plains". Another track "The Wild Frontier" (also penned by the brothers) was included on the 12 inch. "The Way It Is" was written solely by Bruce.

The subject matter of the lyrics is inequality and racism, and the divide line between rich and poor was a subject that a number of bands tackled back in the 1980s. The song's title reflects what Hornsby believes the elite feed to us, that we must accept "that's just the way it is", and at the end of the chorus comes the line "but you don't believe them".
In the second verse, I believe Hornsby is refering to racism in the line "Hey little boy, you can't go where the others go 'cause you don't look like they do".
Inequality is an issue that seems to have deepened further in recent times, so the lyrics are just as relevant now as they were back then.

The song entered the UK singles chart at No.78 on 20th July 1986, and steadily climbed to a peak position of No.15 on 31st August (for just the one week), spending several weeks inside the Top 30, and 11 weeks in the Top 100. It acheived a silver sales certification. In the U.S., the single reached No.1 on the Billboard Hot 100, and the song also topped the Canadian Singles Chart.

The song has been sampled by a number of rap artists including E-40, 2Pac and Polo G. It has long been a trend for rap artists to"borrow" melodies from classic 80s hits, which is testament to the high quality of the music back then, and the lack of musical originality by some of today's artists.
In 1993, the Scottish band Undercover released a cover version which reached No.45 in the UK.

Despite only having one Top 40 hit in the UK, the band's albums were all hits, with the second album Scenes From The Southside reaching No.18 and achieving gold, and A Night on the Town reaching No.23 and achieving silver.
In 1991, after a three week tour, Hornsby disbanded The Range, and pursued a solo career, releasing the album Harbor Lights in 1993, which reached No.32 in the UK, although none of his singles charted.

Huey Lewis and the News