During the late 1970s, the interest in space-themed science fiction saw a resurgence after the release of the Star Wars movie and the TV series Battlestar Galactica. The latter was the creation of Glen A. Larson, and the initial success of the series inspired him to develop the Buck Rogers feature film - the financial success of the Buck Rogers movie meant that the series got the go ahead from Universal. Many of the props, costumes and effects were actually recycled from Battlestar Galactica.

The series ran for two season between Sept 1979 and April 1981. Buck Rogers was brilliantly played by Gil Gerard (which remains the actors best-known role) in both the movie and TV series.

Buck Rogers is a NASA pilot in command of the Ranger 3 space shuttle. A malfunction causes him to be frozen for 504 years. His shuttle is discovered floating around in space in the year 2491, and Buck is revived by his human rescuers. He is told that a nuclear war on November 22nd 1987 caused much devastation on Earth, which is now being protected by the Earth Defense Directorate.

The TV series revolves around Buck having to deal with fitting into the 25th century way of life. He uses his pilot skills to help defend planet earth from invaders, with the help of starfighter pilot Colonel Wilma Deering (Erin Gray). He is also aided by a comical, small robot (ambuquad) called Twicki. Interestingly, the voice was provided by Mel Blanc who is well known for providing the cartoon voice-overs for characters including Bugs Bunny, Porky Pig, Yosemite Sam to name but a few.

Another one of Buck's aids was a disk-shaped computer with an illuminated face called Dr. Theopolis which Twicki wore on his chest.

Dr. Elias Huer (played by Tim O'Connor) had the role of meeting and greeting representatives of other sovereign powers. O'Connor also appeared in an episode of The Dukes Of Hazzard and The A Team, and two episodes of Wonder Woman. He also played Barnaby Jones in Dynasty. 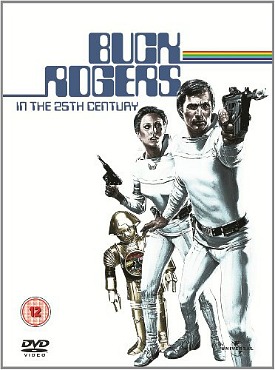 Buck Rogers UK DVD - Series One
With its retro computer style text font, and spandex-covered heroes, this DVD cover perfectly captures the essence of sci-fi at the end of the 1970s. As you would expect from this era, the series is low budget, camp fun, but Gil Gerrard's acting is excellent and fans of retro sci-fi will love it - the sexy Erin Gray in spandex is a bonus, if you like that kind of thing! 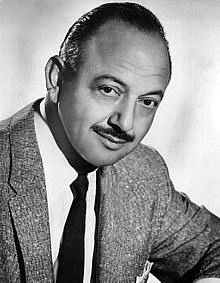 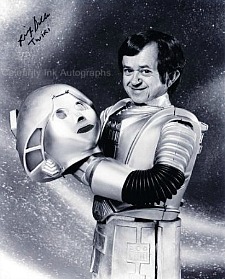 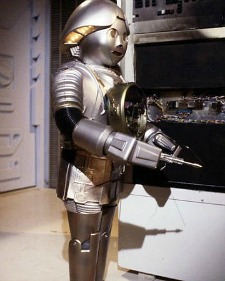 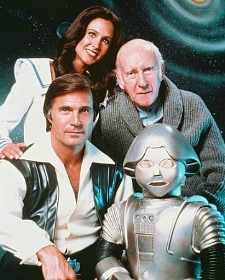 Series Two: Gil Gerard, Erin Gray, Wilfred Hyde White and Felix Silla. Gerard and Gray reuinted in the 2007 movie Nuclear Hurricane.
The second series featured a new production team and this led to the format being altered, with many new characters introduced. Dr. Goodfellow was an elderly scientist played by Wilfred Hyde-White who was well known for his role as Colonel Pickering in the 1964 film My Fair Lady. 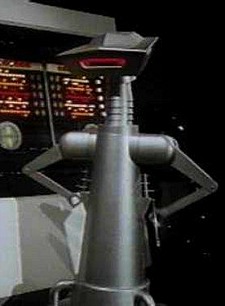 Series 2 - Dr. Goodfellow built a robot called Crichton to help him with his work. 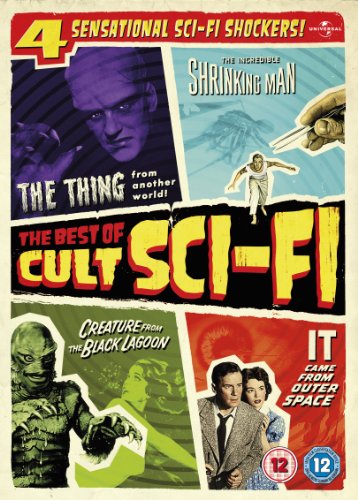