"THE LAND OF MAKE BELIEVE"

The band's fourth single "The Land of Make Believe" was released as the lead single from their second studio album Are You Ready. The song entered the UK singles chart on 22nd Nov 1981 at #48, and climbed steadily to the No.1 spot for two weeks (starting on the Jan 10th 1982 chart), pushing The Human League down to No.2 with "Don't You Want Me Baby".
The single fell back to No.2 on 24th Jan, with Shakin' Stevens claiming the top spot with "Oh Julie". The song remained in the chart for a very respectable 16 weeks in total, which was the longest period that any of the band's singles spent in the charts.
The song was also the band's best-selling single, even outselling their debut Eurovision hit "Making Your Mind Up", and became the 48th best-selling single of the 1980s. It also reached No.1 in Holland, Belgium and Germany.
"The Land of Make Believe" was produced and co-written by the band's regular songwriter/producer Andy Hill, with help from ex-King Crimson band member Pete Sinfield.
During 1982, Bucks Fizz reached the peak of their musical career, with their next single "My Camera Never Lies" also claiming the No.1 spot in the UK on 11th April for one week.
Band member Mike Nolan told Andy Hill that he thought the song wasn't strong enough to be a hit single. Hill told him that the other band members Cheryl Baker and Bobby G really liked the song when they were recording their parts. After it reached No.1, Nolan had to reluctantly admit that he was very wrong with his judgement - awkward!
The B-side of the 7" single featured the festive ballad "Now You're Gone" which was sung by Cheryl Baker and penned by Andy Hill and the band's founder Nichola Martin. A 12" single was only released in Germany and included an extra track "Midnight Reservation".
Surprisingly for the band, the critics gave very favourable reviews of the song, and this was a big turnaround from the usual slating they received for their previous releases. Bob Geldof, Philip Oakey and OMD's Andy McCluskey all gave praise towards the single, and Smash Hits magazine described the song as "sheer genius".
The song closes with a nursery rhyme that was also written by Peter Sinfield. It was narrated by Abby Kimber, who was 11 years old at the time and a former Minipops singer.
Video
The video looks like it was created on a pretty low budget and was filmed at White City, London. Band member Jay Aston was responsible for choosing the costumes and bought the girls outfits from Kahn & Bell in Kings' Road, London and the boys costumes from Boy.
The video opens in black and white with Cheryl Baker waking up in her bedroom (which replicates The Wizard of Oz scene) and discovering that it is floating on water, while Bobby G sings the opening lines in a colour bubble above her. The video then becomes full colour and Baker runs through the water towards a sign which says "Welcome to the land of make believe". She eventually joins the rest of the band and a group of adults and children behind them.
The rest of the video shows the band performing their usual cheesy dance routines which alternate with fantasy scenes including Jay Aston changing into Supergirl (using a dodgy-looking outfit) and "flying" into the water. 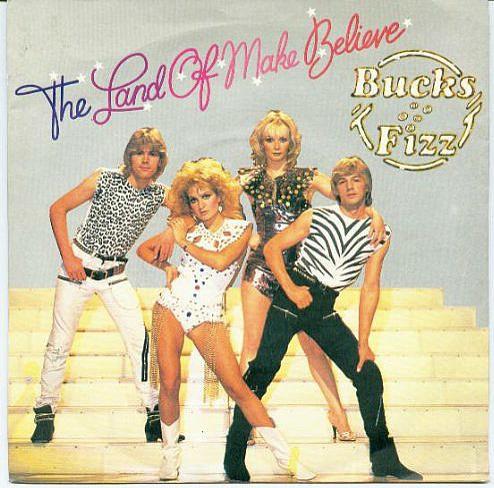 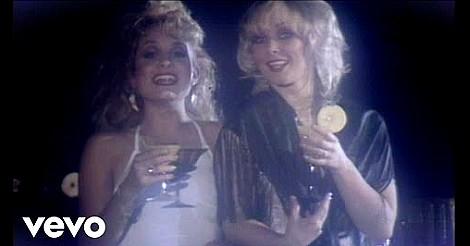 Lyrics
Despite its fairytale theme, the lyrics, supposedly, hide a subtle attack on Margaret Thatcher and the Conservative government's policies - according to Peter Sinfield, at least. Having examined the lyrics below, I really can't see anything myself!

Bucks Fizz -If You Can't Stand The Heat