As you are probably already aware, Cadbury Mini Eggs become available to buy for a limited period each year in the run up to Easter. They were first introduced by Cadbury in 1967, although the packaging obviously looked quite different back then. They're extremely popular for a number of reasons. Obviously, the fact that they are egg-shaped is always going to help pre-Easter sales. However, it's the mouthwatering aroma of the candy shells that hits you when you first open the bag that I find irresistible, and it makes me want to devour the whole packet in one sitting!
These days, much of the bag is filled with air, but that gives me more of an excuse to shove the whole bag down my throat! The texture of the crisp shell against the creamy milk chocolate centre is also divine, and as it's Cadbury's chocolate in the centre, it makes the taste even more delightful. 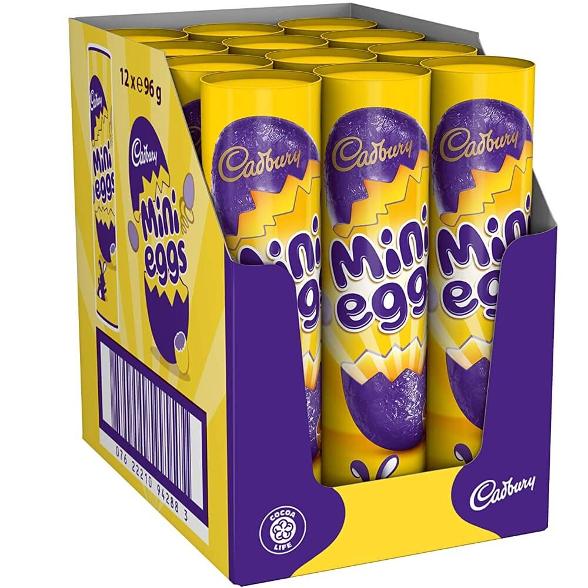 Okay, so here are 6 jaw-dropping facts that you may not know...
1. Mini Eggs are NOT made in the UK. No, really! Actually, that's only partially true because before 2010 they were made at the Keynsham factory in Somerset. Since 2010, they have been made in Poland.
2. There are green Mini Eggs! Yes, it's true. Since 2010 in Canada, the colours of Mini Eggs have been yellow, pink, turquoise and green, but quite why the Canadian prefer green eggs over white is anyone's guess!
3. Mini Eggs should NOT be given to young children. According to St. John's Ambulance, they could actually be a choking hazard to children under 4-years-old, and they gave out the warning for several brands in 2020. Cutting them in half or into small pieces is a simple solution, which will help avoid them lodging in your little one's throat.
4. Mini Eggs also come in a tin. Never seen one? Well, they only launched in 2020, and you can buy a 319g tin from Amazon. Wow, mine has already been ordered!
5. The original product included blue eggs (I remember these from my 70s childhood), but these days they are purple with speckles. The other three colours remain the same, which are white, yellow and pink. However, the U.S. is the only country where you can still buy the original colours.
6. There have been five variants of Mini Eggs launched by Cadbury, although most of them have since bitten the dust. White Mini Eggs were introduced in 2014, although are far too sweet for my ageing taste buds. Micro Mini Eggs were launched in 2007, although are no longer available - I guess I'm not the only one who thinks they were rather pointless. Other launches include Dark Mini Eggs, Popping Mini Eggs (which had no speckles) and Shimmering Mini Eggs.