Watching the opening titles to episode 10 in the video clip above has really given me goosebumps. I haven't seen that clown (he never appeared in the actual story) and the music box thingy since I was a kid! In each episode a different puppet character would be inside the box, and in this clip it's Mr. Dagenham the salesman - time to do a runner!

The series was actually created in the 60s, although was repeated during the 70s. Unbelievably, there was only ever one season created with 13 episodes. The series was inspired by a village in East Sussex called Wivelsfield Green, and set in much simpler times, of course.

Camberwick Green was created by puppeteer Gordan Murray who was also responsible for Trumpton and Chigley. If you hadn't already guessed, the narrator is the legendary children's TV presenter Brian Cant.

There were plenty of delightfully old-fashioned characters in the series, many of which are rarely seen today. One of the most memorable characters was Windy Miller who looked after a creaky, old windmill - remember that clunking noise as the sails turned? He used to brew homemade cider and also appeared in Chigley.

The very first character to pop out of the music box in the intro was Peter The Postman, who delivered the post on foot.

Mickey Murphy the baker sells walnut cakes for 5 shillings each. He lives with Mrs Murphy and has two kids, Mary and Paddy.

Dr. Mopp drives a vintage car and has a beard. He always wears a top hat.

Thomas Tripp the milkman runs the dairy (as milkman do!), and on Saturdays, Peter The Postman's son Paddy, gives him a helping hand.

Mrs Honeyman likes to gossip and carries her baby around with her. She is married to the local chemist.

Mr Dagenham the salesman drives a red sports car and will try and sell anything to everyone. In fact, in the first episode he tried to sell a helicopter to Farmer Jonathan Bell!

Farmer Bell is a modern farmer who likes to use all the latest gadgets. He would often take the michael out of Windy Miller for his old-fashioned way of life.

PC McGarry (number 452) is the local constable who is friendly and rides a motorbike.

Mr Carraway runs the local fishmongers and catches fish in the river behind his shop.

Roger Varley is the local chimney sweep, although he doesn't have a van, instead relying on his motorcycle and sidecar.

Finally, Mr Crockett the garage owner fixes vehicles and serves petrol. The garage is located on the outskirts of Camberwick Green. 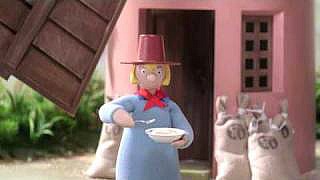 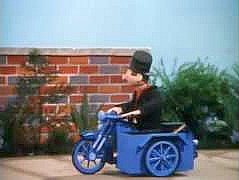 In this episode (which is actually real and not a spoof!) Windy Miller drinks rather too much of his strong, home-brewed cider. Someone getting sozzled on children's TV - who'd ever of thought it? 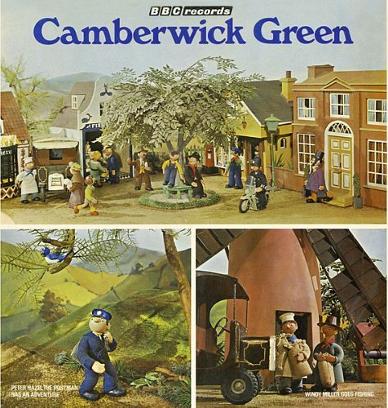 This Camberwick Green LP by BBC Records featured two stories narrated by Brian Cant and a selection of songs. 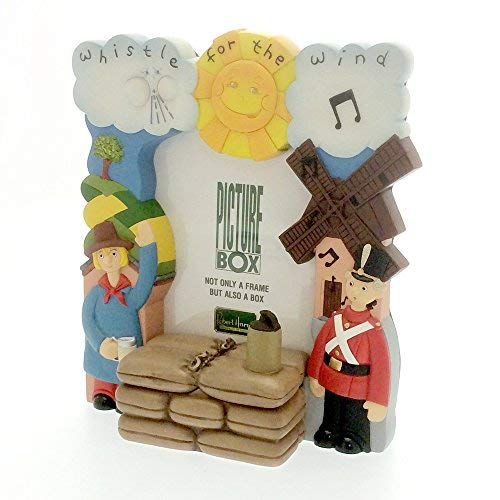