There can be hardly any 80s girl who doesn't remember the Care Bears, and they became hugely popular during the 1980s, with greeting cards, books, comics, annuals, cute plush toys, poseable figure toys, a TV series and three movies featuring the loveable characters.
Just about every girl wanted one, and that included myself, but can you remember the names of all the original characters?
Well, I'll come to that in a moment, but I do remember that each Care Bear toy came with it's own, unique personality, and this was displayed in the form of an image on a belly badge. Each bear was also a different colour, too.
The very first Care Bears appeared on American greeting cards in 1981, and these were created by the children's illustrator Elena Kucharik. There were 10 original characters.
If you're a fan, then you will know that The Care Bears live in a faraway place up in the clouds called Care-a-Lot. You may also remember the Care bear Cousins, too, which were different animals.
So did you watch any of the movies released in the 80s? They were actually not that great, and felt to me very much like promotional tools designed to sell as much merchandise as possible.
The Care Bears Movie (1985) is the first of three films all released during the 80s, and it was based on the toy range.
Care Bears Movie II: A New generation was released in 1986, and in this one we saw the Care Bears Cubs for the first time on screen, and they also had a line of toys. This film was criticized for the over-use of merchandise tie-ins and pretty poor animation.
The Care Bears Adventures in Wonderland was the third movie, and was released in 1987. It was based upon the Alice Stories by Lewis Carroll. The film received very mixed reviews, although it was generally viewed as a slightly better movie that the previous two.

The first plush toys launched in 1983, and these were produced by Parker Brothers and Kenner, and they were widely advertised. They were introduced to the public at a toy fair in New York City in February 1983. Their popularity quickly turned into a craze, and over 40 million were sold during the 80s. 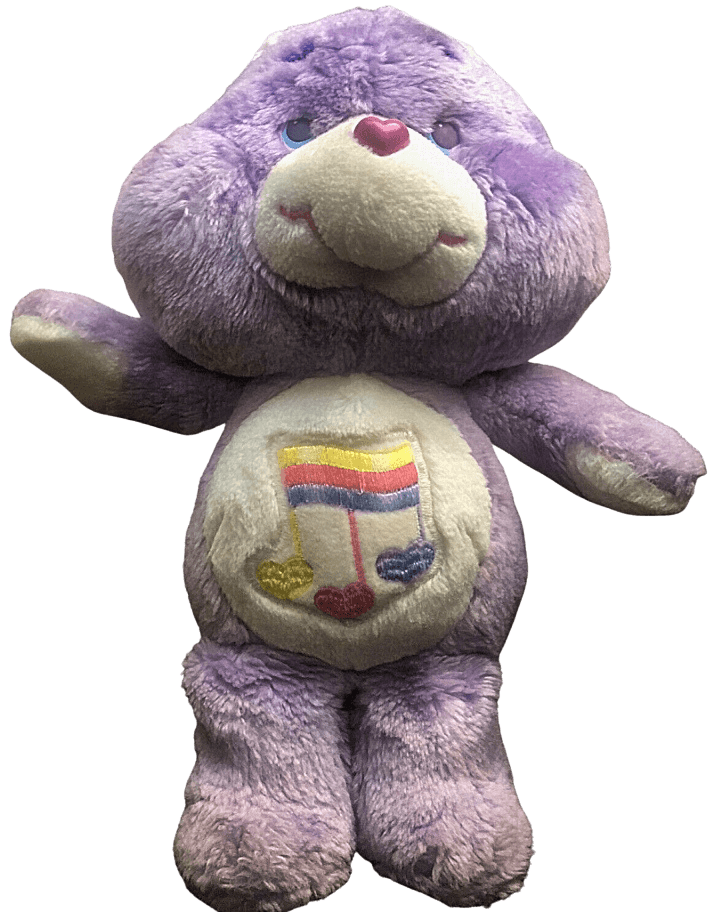 This is my original Harmony Care bear 13" soft plush toy, who came with a musical notes emblem. She's looking a little grubby after all these years, but cleaning it is not an option or it may well fall into pieces! My Mum knew I loved purple, so this one was perfect for me, and, of course, she still gets plenty of hugs! I challenge you to look at her cute face and not cuddle her - who could resist!
Harmony loves bringing people together and will often do this through the joy of music.
Although the bears were marketed towards little girls, around half of the characters were male, so let's take a look at the rest of them. 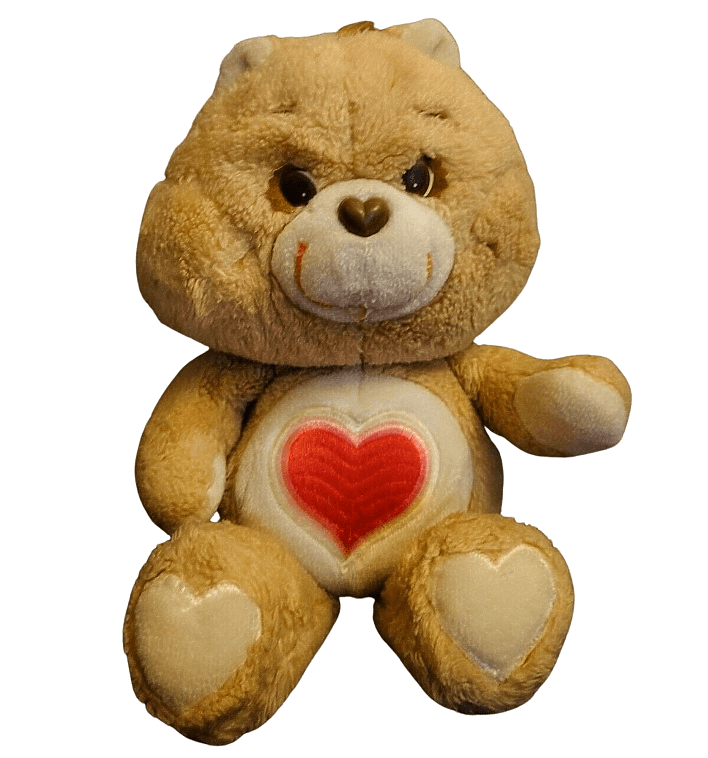 This is the male leader of the bears, and although the toy seems to have a rather angry expression, he is a very loveable, caring bear. He welcomes new Care Bears into the circle and issues them with their belly badges. He has a red heart badge and originally came in brown but later became orange. 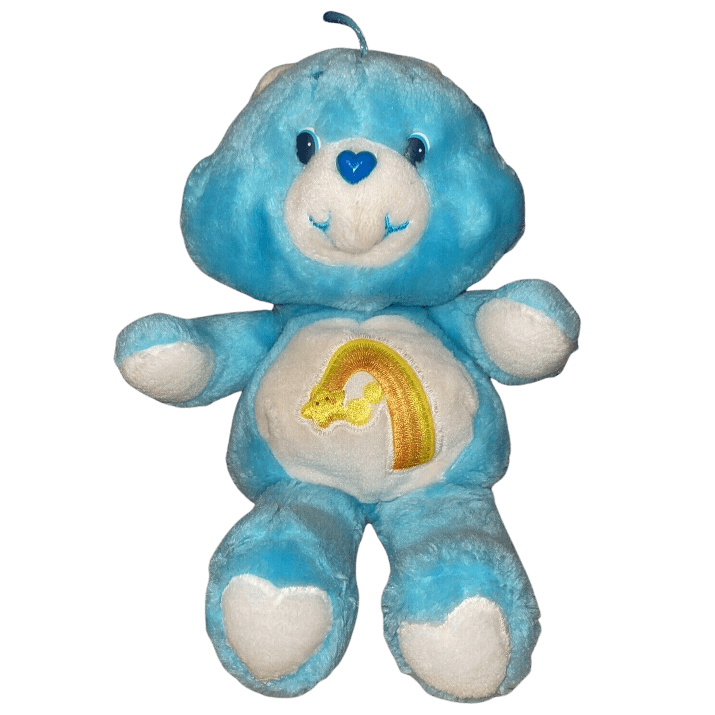 A blue female bear with a yellow shooting star emblem. She likes to make wishes come true and also making wishes. I have also seen a teal green version of this bear which may have been released as an update to this one. 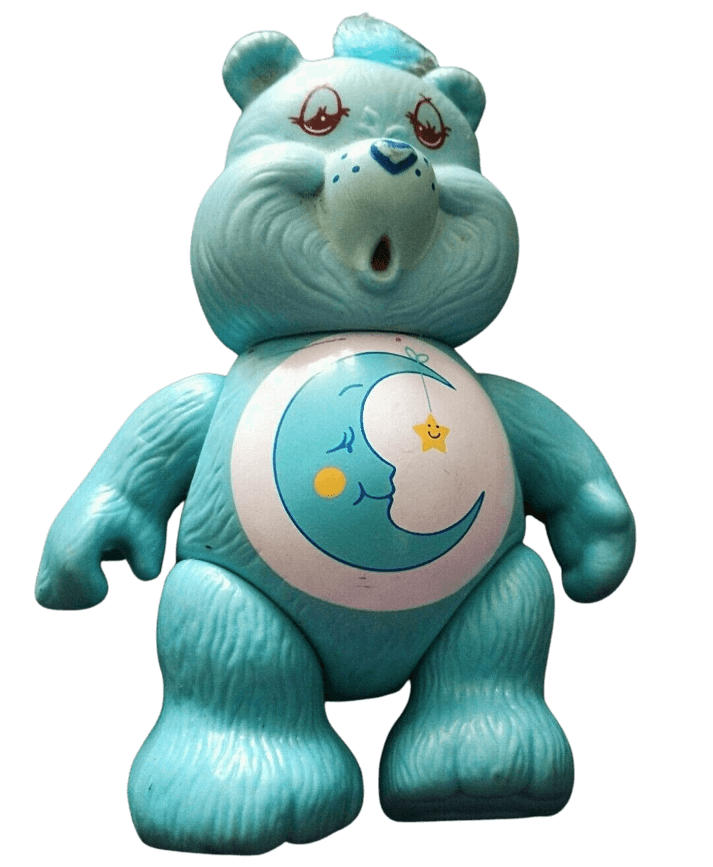 This is a male bear in aqua blue. His badge features a star tied to a moon, and this is a very sleepy character who yawns rather a lot. Hmm, sounds rather like me before I've had my caffeine boost! He enjoys ensuring that everyone get's a good night's sleep, whether that's solving their insomnia problems or just simply calming them down. 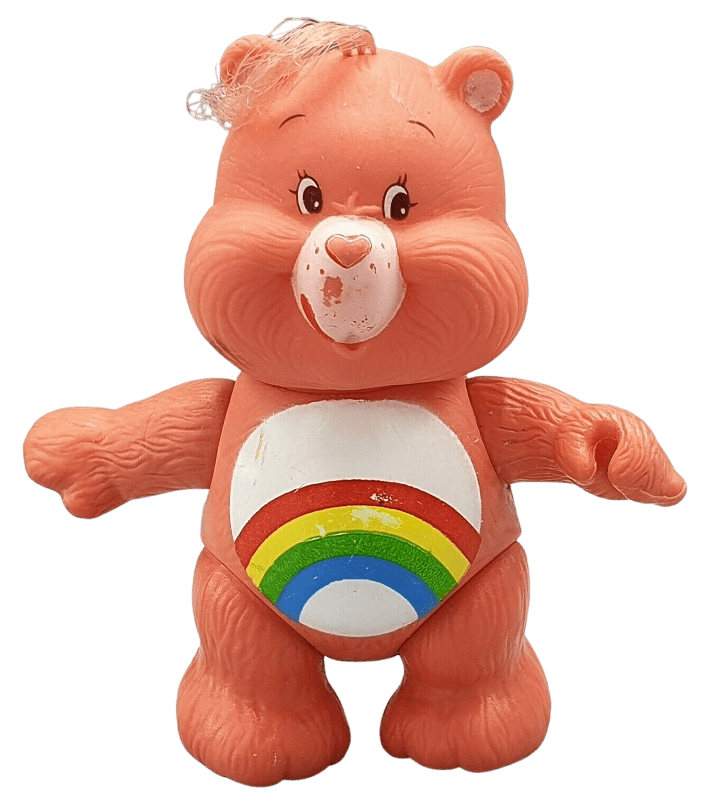 A very happy female bear in a pretty carnation pink/peachy colour. Her emblem is a classic rainbow. This is one of my favourite characters, and who can argue against a cheerful disposition? This bouncy character is a joyous ball of fluffy fun. 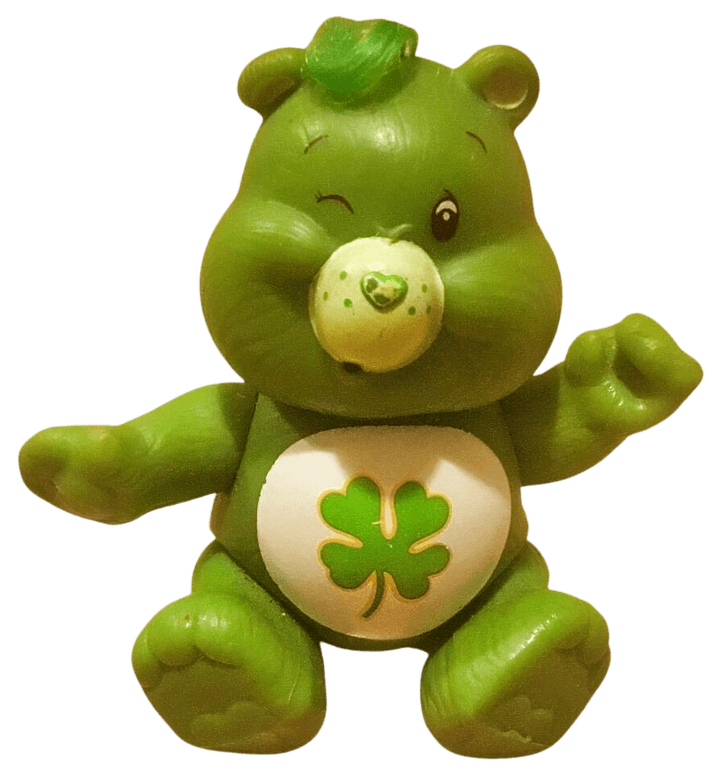 This male bear comes in Irish green with a four-leaved clover badge. He likes to spread good luck, and his accent changed from Irish to American and then back to Irish again - do make your minds up! The poseable figure toy from 1983 is shown above. 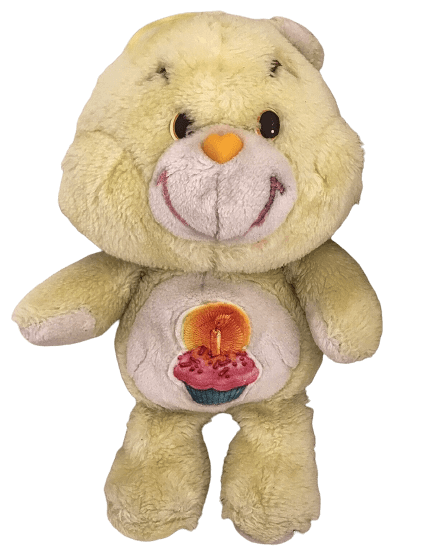 A male, pale yellow bear who loves to party and play games. His emblem is a cupcake. He loves a celebration and wants everyone to enjoy their birthday, and is always giving cards and presents to others. 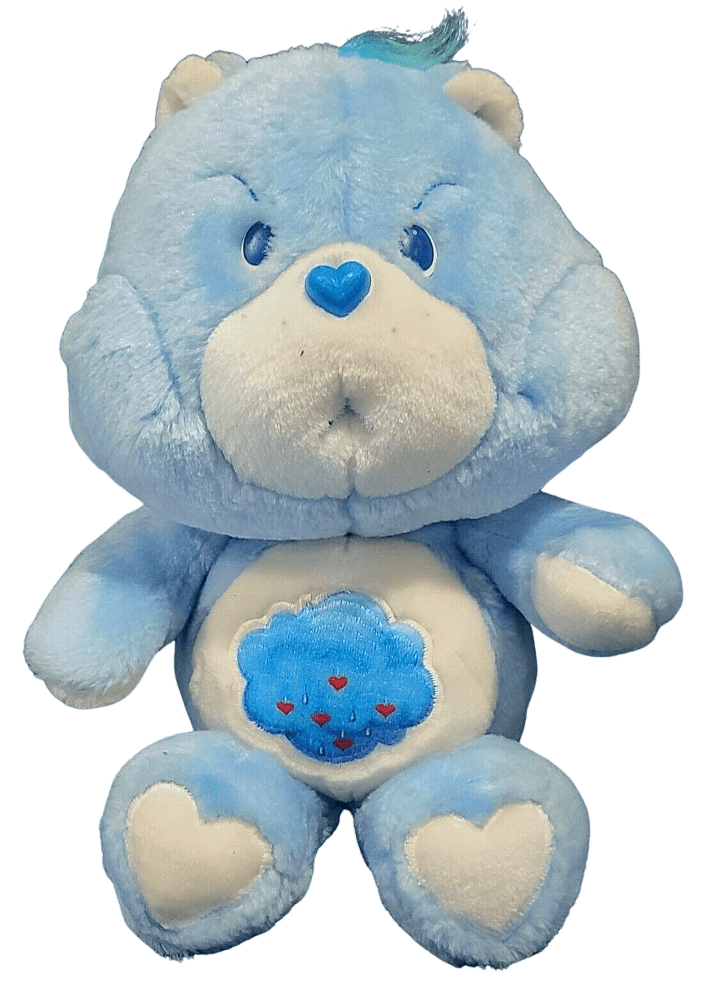 This is a male bear, (of course!), and he has a rain cloud as an emblem and is indigo blue - Hey, are you calling me grumpy Laura? - Mark. This is one of the best-know characters, who is often cynical and snarly. However, he does help grumpy kids. 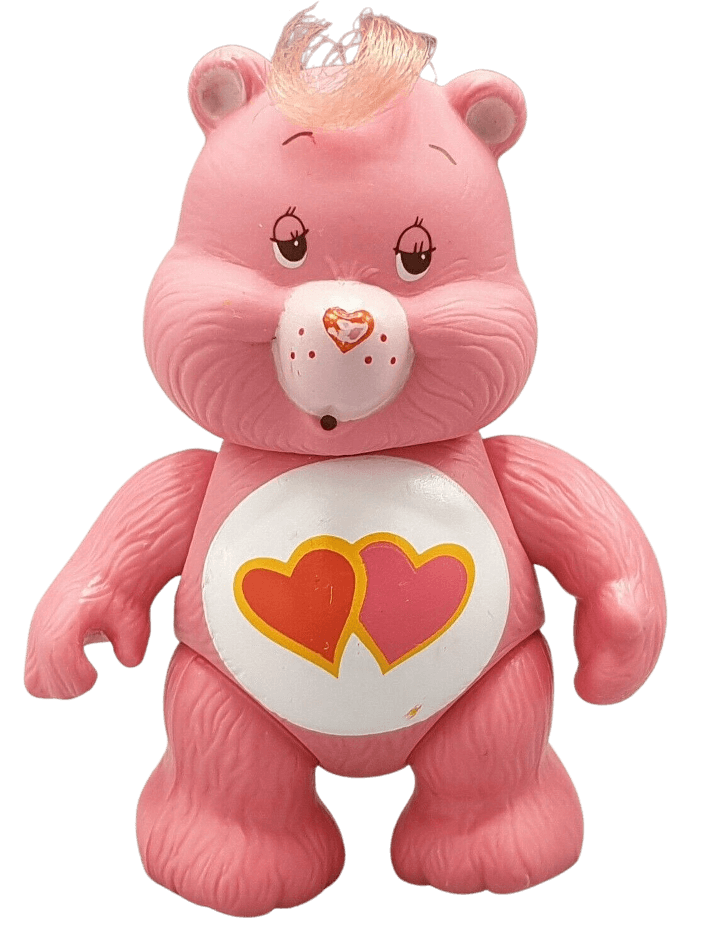 This female, magento pink bear has a very pretty appearance amd likes to spread the love! She has two hearts as her emblem. She is kind and likes to love everything and anything. 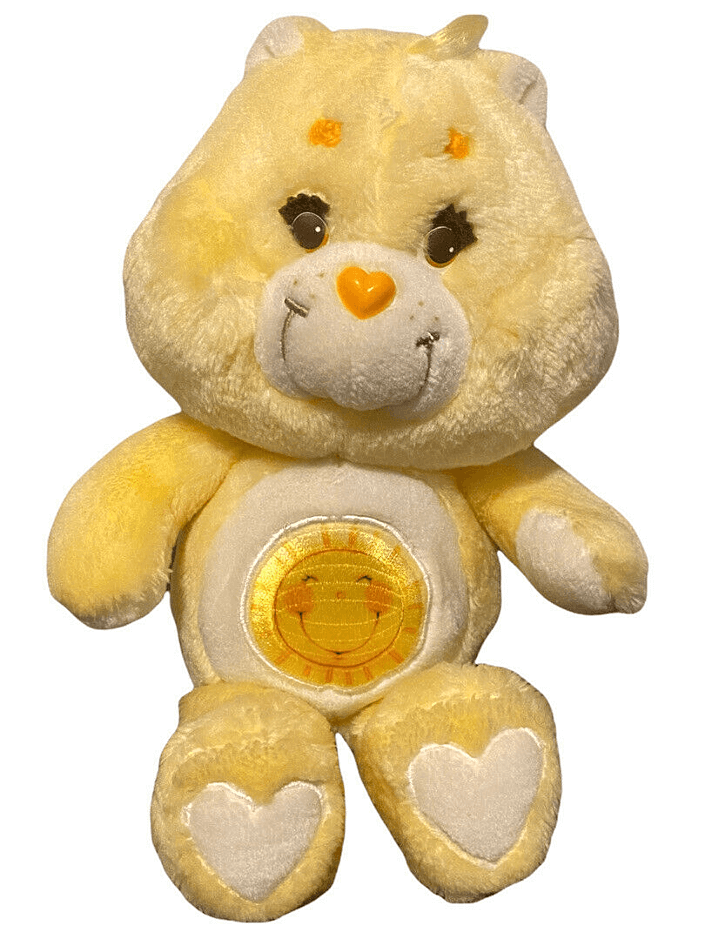 Funshine bear has been both male and female and comes in a deep yellow and with a sunshine badge. He/She has a cheerful disposition, and always looks on the brighter side of life and likes to help others. 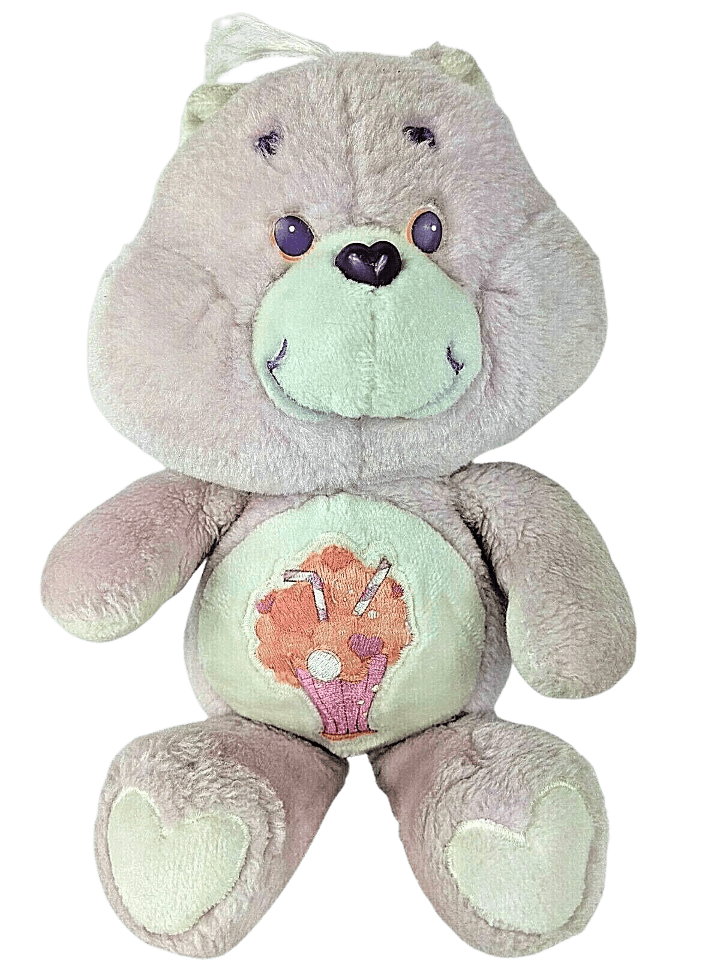 This pretty lavender coloured bear is female and loves to share everything. She has an ice cream soda badge with two drinking straws to denote the sharing. This one has faded quite a bit since the 80s, but you can still just about make out the lavender colouring. 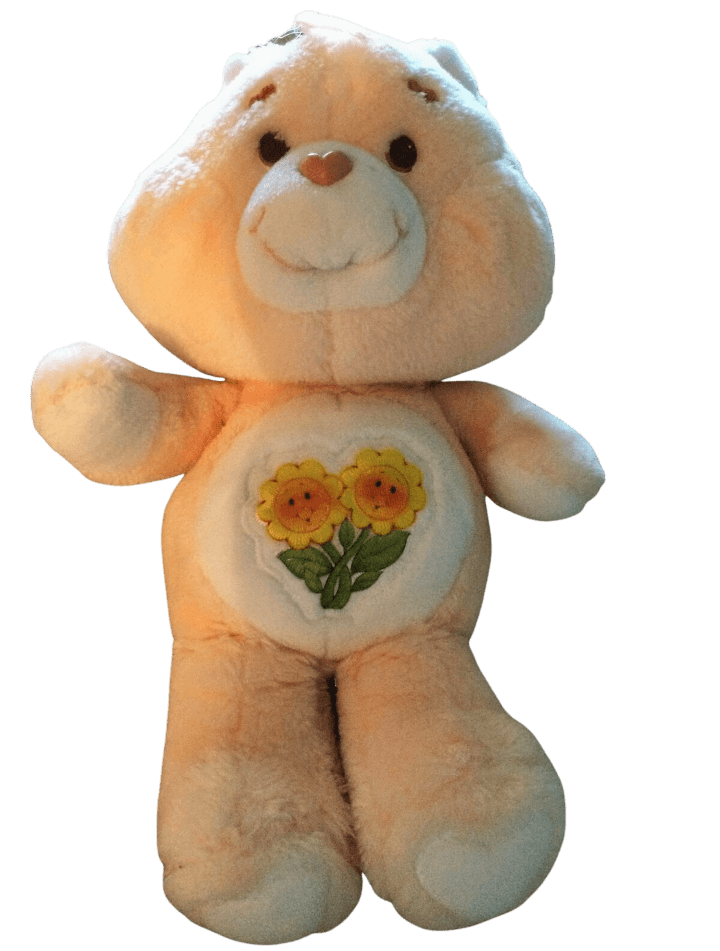 A very kind, light orange female bear with two, smiling sunflowers as an emblem. Today, she is better known as Friendship Bear. This one is a social butterfly and and expert in companionship. She loves to befriend others and help them to cure their loneliness. 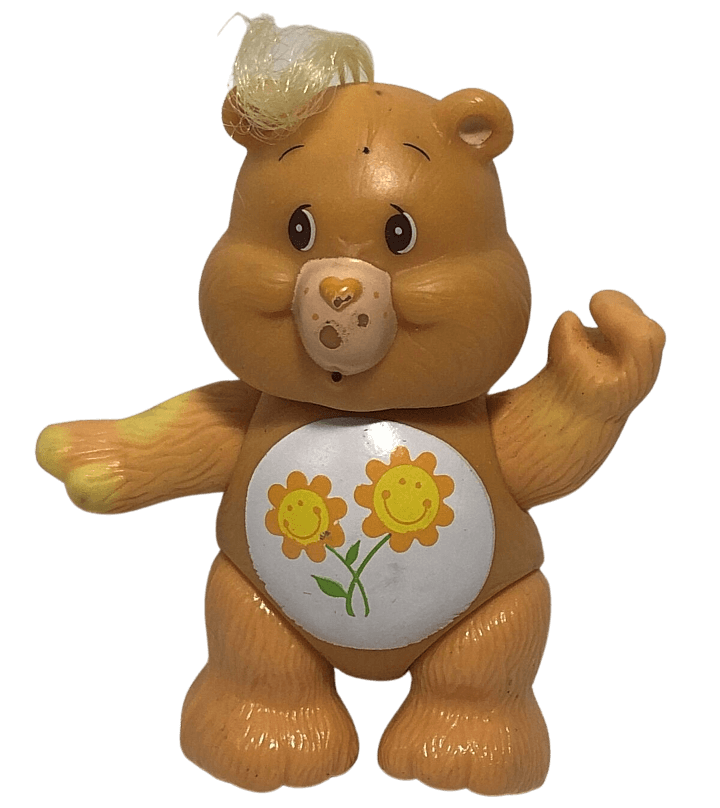 This is an original Friendship Bear poseable figure from 1983.

The toys are still popular today, although look rather different, and there is an attractive line of collectible plush toys that can be viewed on the official Care Bears website. These, however, appear to be more popular with adults than with children.
Of course, if you would like to buy an original plush from the 1980s, then ebay would be a good option. One in mint condition can fetch a tidy sum of hundreds of £pounds, although most will sell for a lot less.
A series of annuals was published by Marvel between 1986 and 1993. A series of comics was also published in the 1980s. From 1985-1987, they were produced by an imprint of Marvel called Star Comics. After this, they were published directly by Marvel, with the last one in 1989. 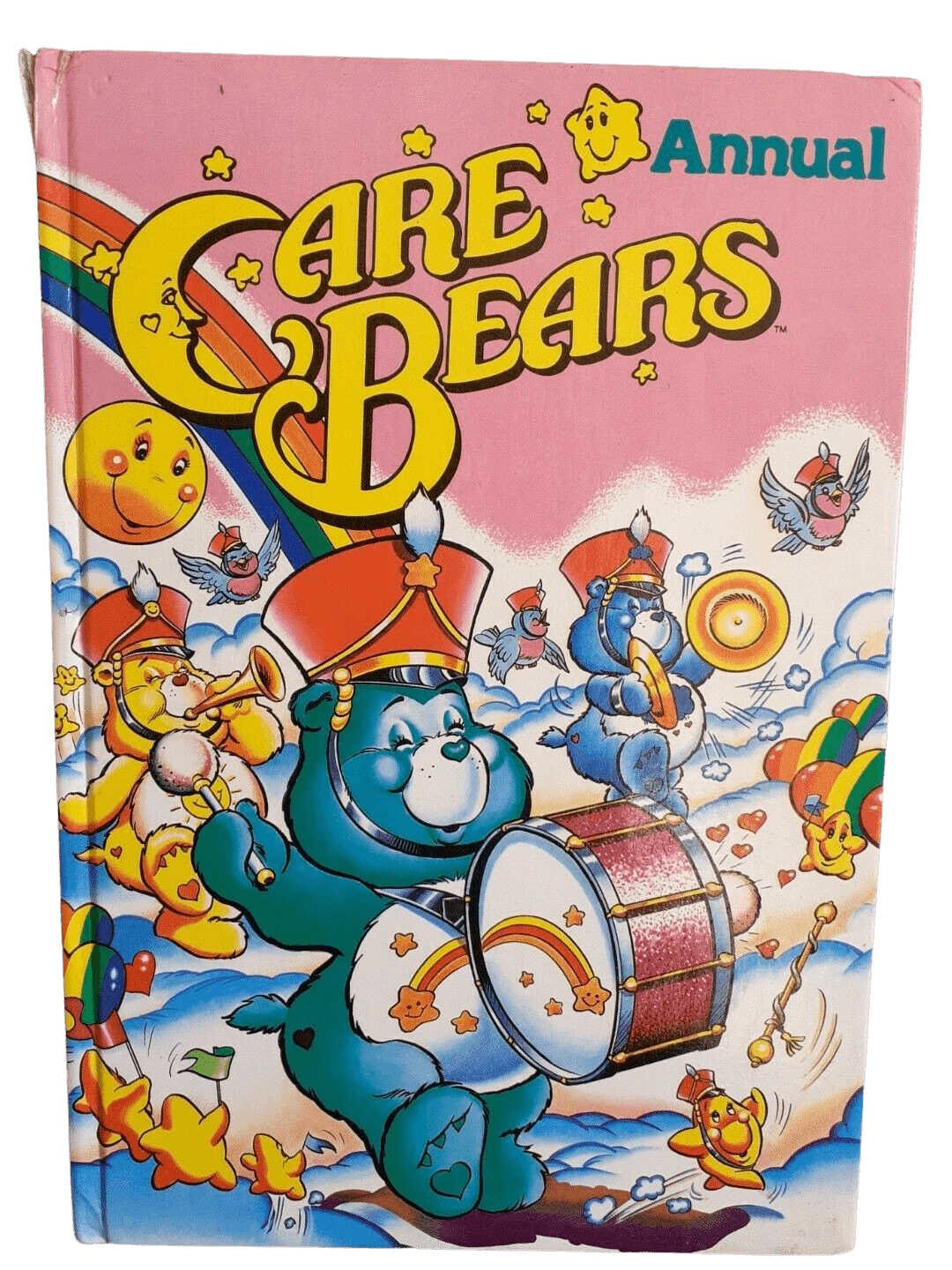 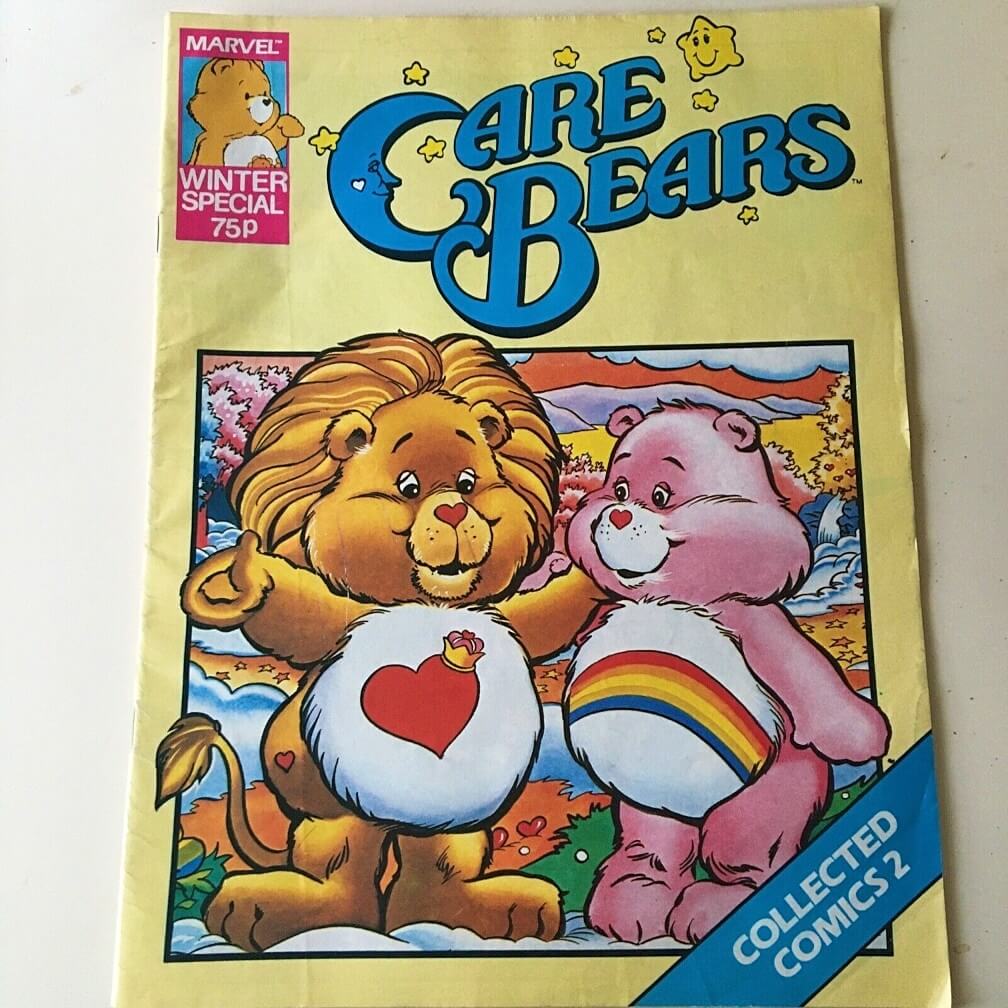 This collectible comic by Marvel is a "Winter Special" from 1986 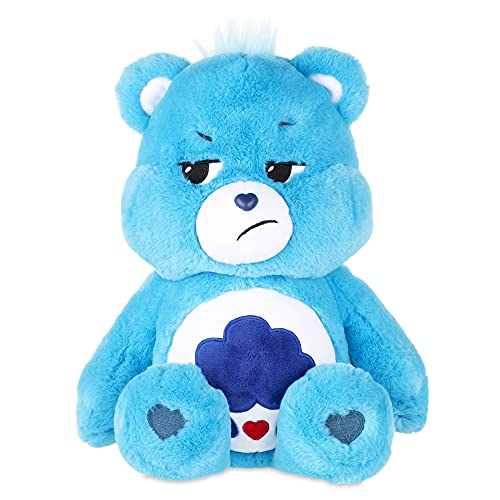 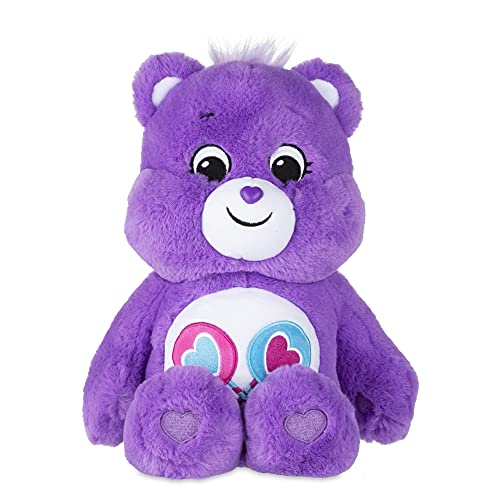