Back in 1981, one of the most played arcade games of the year was Defender. The sideways scrolling shoot-em-up was the first of its kind and there have been countless clones since its release.

Cosmic Defender is one of the latest clones and plays very much like the original game. It won't play on phone and tablets, but if you're on a PC then you can play the game right now.

The idea is simple. Destroy the aliens and save your allies. The aliens will try to sbduct your friends, so you'll need to shoot them down and catch your friend mid-air before he/she falls to the ground.

A or Space Bar = fire missiles - keep pressed for autofire.

D = Hyperspace - teleports you to a random location.

As with the original game, Cosmic Defender is easy to learn but much tougher to master. You'll need to be gentle with your movements to avoid being destroyed. 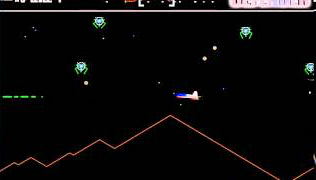