We're very pleased to be able to bring you 5 official episodes from the classic, 1980s series of Danger Mouse. Custard originally aired as 5 minute episodes at the start of series 2, which was shown on ITV from 4th to 8th January 1982. All 5 episodes have been joined together in the official video above.
Baron Silas Greenback is testing his latest secret weapon in the vast wastes of the Sahara Desert. He plans to flood the world with custard using tins of instant custard filled with an exploding booby trap. In his Mayfair hideout, Colonel. K., head of secret services, is on the video phone to Danger Mouse. He travels to outer space to find a solution to the problem - the Womeablid Custard-Mite of Glut!
The mite has an insatiable appetite and can consume an entire planet's worth of custard in minutes.
While travelling in outer space, Danger Mouse stops to ask a green alien, who is polishing his flying saucer, for directions. He replies in an Irish accent, giving them confused, long-winded directions. Eventually, after switching to hyper-drive, they find a de-custardised planet. Penfold discovers a batch of eggs. One of then hatches and a baby alien thinks Penfold is his mother. The pair run off, straight into the mouth of a pink alien. Luckily he has false teeth, so they wait for night fall and he plonks them into a glass of water, with the pair clinging onto them. They climb out of the glass. 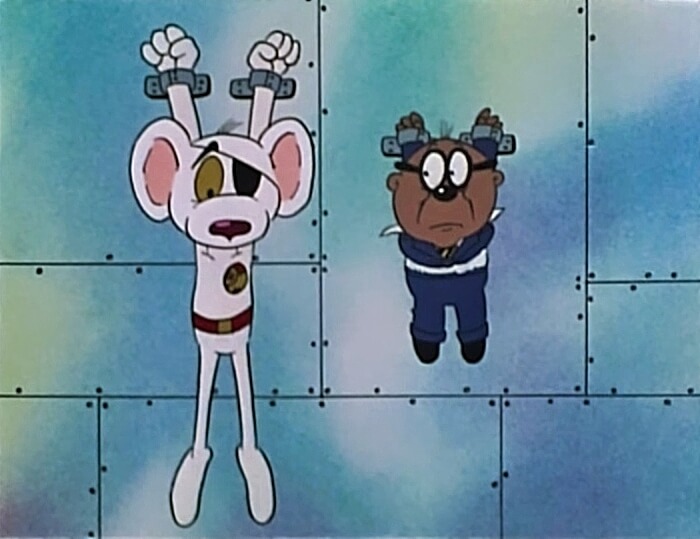 While trying to find the mite, they fall through a weak spot on the planet's surface into a cave below and discover a custard mine. However, they are zapped by a one-eyed alien and they are accused of trying to steal the custard-mite. They are sent to prison and hung on a wall in shackles. Their cell begins to fill with custard, threatening to drown them. Suddenly, the custard level drops and they discover the custard mite in their cell. Danger Mouse tells the mite that he'll lead it to a world of custard if he frees them.
They escape the planet with the custard mite and fly into space, but are chased by hundreds of the one-eyed aliens in their spaceships. Some of them crash into an asteroid, but some survive and continue to chase after them. Danger Mouse then encounters a Space Invaders game and manages to defeat it, winning a free game. With little time to spare, Danger Mouse tells Penfold "I'll leave that to our one-eyed friends!".
They then find themselves in a Star Wars style battle with the one-eyed aliens on an asteroid. The custard mite takes control of their spaceship without permission, and he pulls off the steering wheel and loses control, ending up on the edge of the universe. Danger Mouse fills in the blank area on the map and they are back in the universe.
Now lost in space, they discover another weird alien sat on an asteroid who speaks gibberish when they ask for directions. A traffic warden fines them 99 bicycle clips for parking illegally. They then get caught up in the mergatroids comet. Danger Mouse rides it like a horse and brings it to a halt. They eventually manage to find earth which is drowning in custard.
They eventually manage to find earth which is drowning in custard. As they head towards the plant with the custard mite to save it, Greenback spots them from his hideaway on the moon. He then traps them in a pink hole. They manage to find a doorway Earth and the mite starts to gobble up the custard. The army fire the remaining tins of custard to the moon, drowning Greenback in custard.
Directed by: Brian Cosgrove 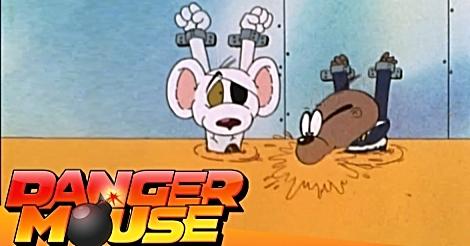 British Cartoons from the 80s 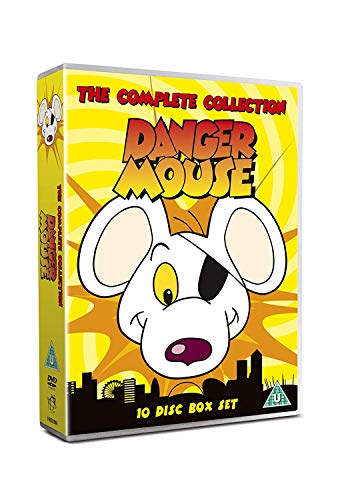