Released during his blonde hair and suits period (which could be described as a dapper rocker look), "Modern Love" was the third single to be released from David Bowie's fifteenth studio album Let's Dance, entering the UK singles chart at No.8 on 18th September 1983. It reached No.2 for one week on 2nd October, being held off the top spot by Culture Club's Karma Chameleon. 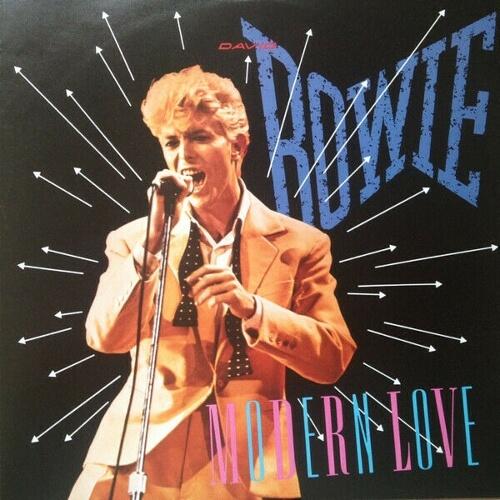 The single was released during Bowie's Serious Moonlight Tour, and the video features footage of Bowie performing with his band in concert at Philadelphia on 20th July 1983. A live version recorded in Montreal on 13th July was included on the B-side.
The single reached No.14 on the Billboard Hot 100 in the U.S., and also reached No.3 in Ireland.
"Modern Love" featured Nile Rodgers and Stevie Ray Vaughan on guitar. Rodgers also co-produced the song alongside Bowie.
In the lyrics, Bowie suggests that he doesn't need religion, marriage or modern forms of expressing his love in a modern world where much has changed but in reality nothing actually changes in terms of human needs and emotions.
Bowie re-recorded the track in 1987 with Tina Turner for a Pepsi TV advert, which had a Weird Science storyline.
Scottish rock band Biffy Clyro recorded a heavy metal style cover of "Modern Love" in 2018 for The Howard Stern Tribute to David Bowie. Frontman Simon Neil described being asked to do a Bowie cover as "like being asked to have sex with a lion!". Yep, very challenging indeed!