Demon Attack was a very enjoyable, fast-paced shooter that was released by Imagic in 1982. It was originally released for the Atari 2600, and then ported to many of the home consoles and 8-bit computers of the day. The game was much-loved by VCS/2600 owners, and another really decent version was for the Intellivision.
With wave after wave of bird-like creatures descending upon the player, the game bears many similarities to the 1980 arcade game Phoenix. Indeed, it was rather too similar, which led to Atari Inc. suing Imagic, who settled out of court.
Despite this, the game won "Best Videogame of the Year" in the 1983 Arcade Awards by Electronic Games Magazine, and became the Imagic's best-seller.

Part of the fun of the game was the fact that the player could obtain really huge scores. It was a game with no end, although the version released in the first batch of cartridges for the 2600 ended after the 84th wave. The game's creator, Rob Fulop, heard the news that the game had been unexpectedly completed by some players after just two days. Apparently, Fulop added just one line of code to make the game infinite, allowing players to rack up some pretty impressive high scores.
Like Space Invaders, Galaxian and Phoenix, the game is a fixed shooter in which your cannon's movement is restricted. Set on the ice planet Krybor, the player must destroy relentless waves of flying demons who swoop from above. The only goal is to shoot and survive!
From the eye-catching box art, to the slick and sophisticated waves of enemies, this was certainly the best shooter released so far on the 2600 in 1983. The way in which the birds materialised from the sides of the screen was a clever touch, too.
This is most definitely a cartridge you should look out for if you have a working 2600.
The port for the Atari 800/XL/XE computers looks very similar to the 2600 version, but for some reason is not as fast, despite its advanced capabilities. Some improvements in the graphics department would have been a worthy addition, and it's not really the greatest of ports.
A version for the Commodore 64 was also released, and features additional background graphics. To be honest, the graphics add nothing to the gameplay (they actually made it harder to see the demons), and the sound effects are pretty lacklustre compared to the Atari versions.
Now the Vic-20 version is actually far better than the C64 version. It looks and plays rather like the 2600 version, but has slightly more colourful and smoother graphics. Many would argue that this is the best port.
The Intellivision version also has additional background graphics and quite nice sound effects, although rather too bleepy for my liking. It's quite fast and responsive, and also features a huge mothership which has the face of a demon. However, the animation is a little clunky.
So overall, the 2600, Vic-20 and Intellivision ports are all excellent, and well worth getting hold of if you have still one of these systems.
Imagic folded after the video game crash, and the rights to many of their titles belong to Activision who re-released many of their games, including Demon Attack. 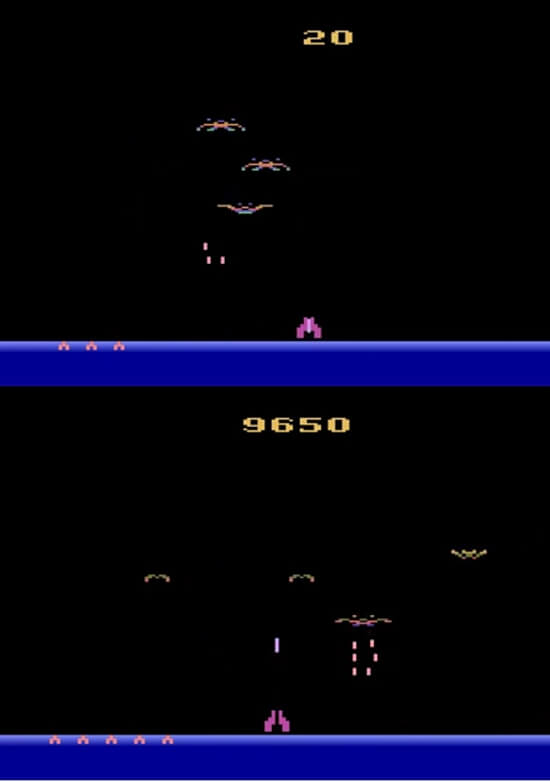 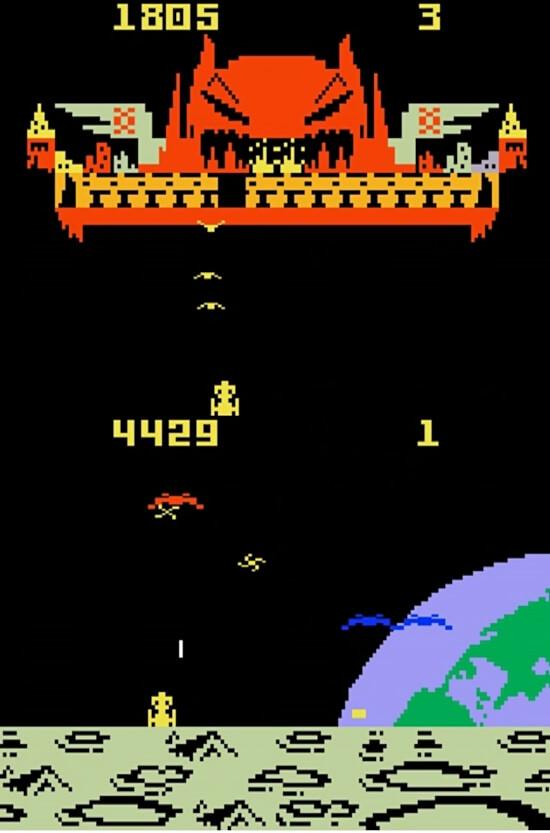