This Terrytoons creation was one of my favourite cartoons from my 70s childhood, and I was pretty excited to discover it again recently on Youtube.

The main character is, of course, Deputy Dawg himself who is a Deputy Sheriff - and a dog, obviously! It was set in rural Florida in the earlier cartoons, but the location actually changed to Mississippi and then Tennessee as the series progressed. Each episode lasted for around 5 to 6 minutes and originally aired in 1962 and 1963 on CBS in the U.S.
The series made it's British debut on BBC1 on 31st August 1963 which was a Saturday. However, it's the repeat runs during the 70s that I personally remember. Rather than showing them individually, several cartoons were packaged together to create a half hour show.Other characters in the series were the varmints (pests) Muskie Muskrat, Moley Mole, Possible Possum, Ty Coon, Vincent (Vince) Van Gopher, Inchworm and Pig Newton. There was also the Sheriff and Mrs. Deputy. 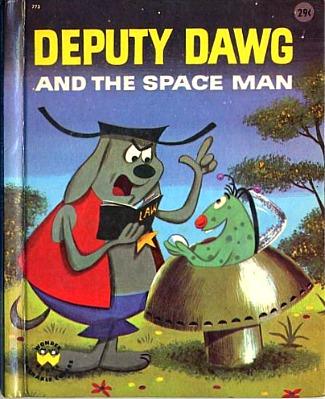 Deputy Dawg and the Space Man hardcover book (1961)
The cartoon had everything that was typical of a cartoon produced in the 60s. The rural backdrops, hillbilly music, offbeat storylines and stereotypical Southern accents (with the regular use of the word "cotton-pickin" in a negative sense) wouldn't have a cat in hell's chance of being aired today, and would be deemed as being racist and classist.

Deputy Dawg himself spoke slowly with a raspy voice and he sounded dull-witted. However, sometimes he would get the better of Muskie and the other "varmints".

Muskie Muskrat would often take advantage of Deputy Dawg's character and would often outwit him with his intellect. Many storylines involved Muskie trying to steal eggs from the hen house.

Muskie's partner in crime was the beret-wearing Vince the gopher, who spoke with a soft, whispery tone and was easily influenced by him. 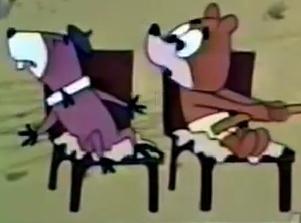 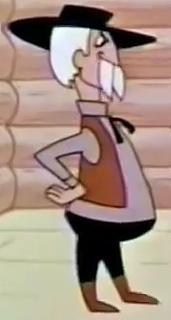 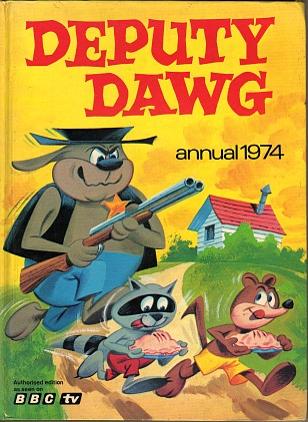 My old Deputy Dawg annual from 1974 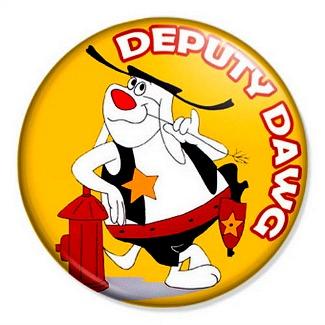 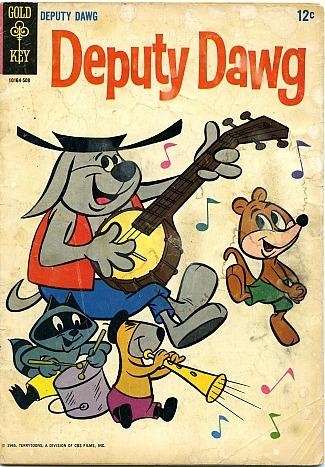 Here is an original comic book which was published by Gold Key in 1965. Here we see Deputy Dawg playing the banjo with Ty Coon playing drums (an old, upturned paint can), Vince blowing some kind of wind instrument and Muskie dancing to their tune - not something he does very often! 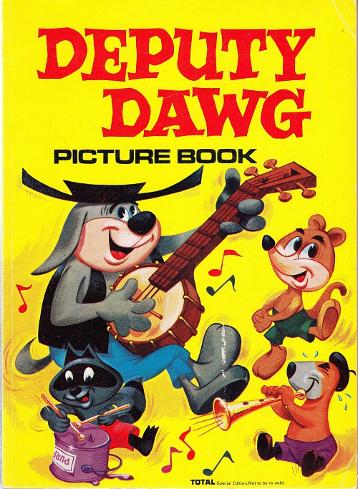