If you were a gamer back in the 1980s, then you may remember the game Boulder Dash. Originally released on the Atari 8-bits, the game was soon ported to other home computers (including the C64) and became an instant hit.

Diamond Mine for Android is, quite obviously, based on the 1984 classic game, and like Boulder Dash, includes an editor to create your own levels.

It's been almost three decades since I last played Boulder Dash, so I was pretty excited to be able to play a new version of the game on my tablet. 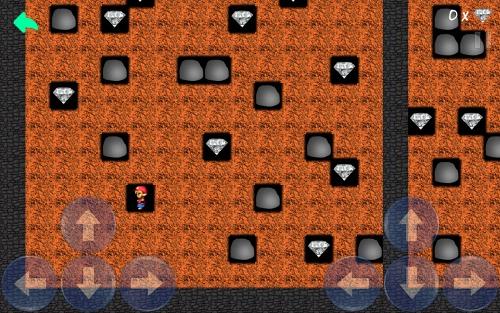 There are five stages to complete, with 18 levels in each stage, making a total of 90 levels. Four stages are locked until you complete the first one. However, you can access any level within a stage.

The aim of the game is to collect all the jewels on each level without getting killed by a falling boulder, a nasty crab-like creature or an exploding bomb or stick of dynamite. Gems include diamonds, emeralds and rubies. A bomb or dynamite will destroy everything in the near vicinity, including any gems and your miner. If you're clever, you can use them to destroy the crab creatures and also destroy any boulders blocking your path to a gem.

Your miner character is moved touching the arrow symbols which are available on both sides of the screen, and the spacing is perfect for my big thumbs. To avoid being crushed by a boulder, you must either avoid them or run underneath them without stopping. You will need to be constantly thinking of where to dig to avoid being eaten, crushed or blown to smithereens!

Sound effects are perfectly adequate and include a modern, sampled bleep (as opposed to a computer chip bleep) when you collect a gem and an amusing yelp from your miner when he his crushed. The explosions are pretty loud, too! Sadly, there is no music which is a shame. Music was almost always included in games back in the 8-bit days, and composers became very well known for their work - remember Rob Hubbard?

So, how does the game compare to Boulder Dash? I have to say I much prefer the original game. Diamond Mine lacks the colourful screens and wide variety of screen layouts. Every level is a yucky brown, and just not diverse enough to make you want to carry on. I know soil is supposed to be brown but this is a computer game, after all - use a bit of imagination!

When playing on my Atari back in the mid 80s, I remember looking forward to each level in anticipation, wondering what new colours and challenges it would bring. Diamond Mine just looks and feels a little dull. One major annoyance is that when you are killed you have to go right back to the start of the level.

On a positive note, the level editor does allow you to create endless new challenges. The game controls are responsive and I did not encounter any bugs. Oh yes, and it's totally free, too! 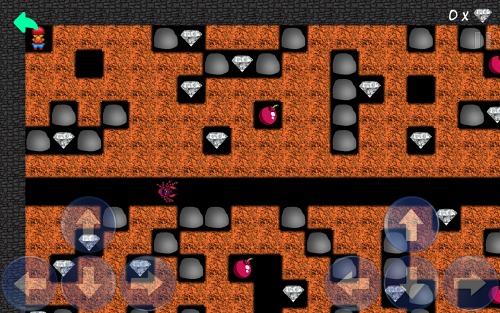 Level 18. There is little point is showing you any more levels as they're all mostly brown and uninspiring.

Diamond Mine at Amazon UK

Diamond Mine at Amazon US