All The Greatest Hits - Diana Ross

This is an unforgettable hit from the eighties and is a popular choice at weddings for those Dad's who want to enjoy a bit of Dad-dancing! Released in February 1986, Chain Reaction went on to become the first UK number one by Diana Ross for 15 years. The American singer's last No.11 was I'm Still Waiting in 1971.

The track was written by the Bee Gees - you can really imagine them singing this one - who also provided the backing vocals. It's very odd that in in the US the song only managed to reach #95, and even the release of a remixed version several months later still only managed #66 in the Billboard Hot 100.

Barry Gibb had a hand in producing the song, along with Albhy Galuten and Karl Richardson. The B-side was entitled More And More.

Chain Reaction was taken from the album Eaten Alive (#11 UK album charts), and the title track was co-written and co-produced by Michael Jackson.

Despite continuing to have hit in the British charts through the 90s, this was Diana Ross's last single to chart on the Billboard Hot 100, and it remains a mystery to me as to why she just wasn't popular in her home country. Her last chart entry was in 2005 with boy band Westlife. She sang on the track When You Tell Me That You Love Me which just missed out on the top spot, reaching #2. 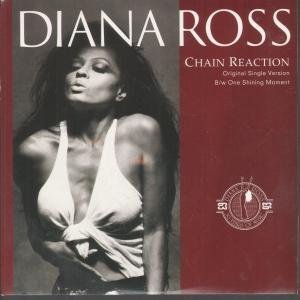