Our first video clip features Youtube game fanatic Steve Benway playing the second Double Dragon game on a Commodore Amiga for the very first time. As Steve admits, he plays the game rather badly and the video is not a walk-through or review. That's exactly why I have chosen this particular video, because it gives a true reflection of how many of us would have played the game for the first time back in the day. Near the start of the clip, Steve amusingly tries to take the helicopter in the hangar proclaiming "I want that, give me that helicopter!". 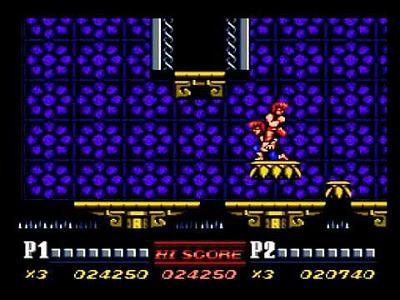 As you will have gathered from watching the video, the game is a sideways scrolling, martial arts beat 'em up, and was originally released as an arcade version in 1988 by Technos Japan. Initially, the sequel was to be created as an upgrade to the original Double Dragon, but soon developed into a stand alone game, using far too much memory to be released as an upgrade.
The Plot revolves around a damsel in distress, Marian, who featured in the original game. She is shot and killed by the leader of the Black Warriors. The players take the roles of brothers Billy and Jimmy Lee, and have the task of avenging Marian's death.
Although the arcade version of the sequel was accepted as an vast improvement on the original, and even regarded as a classic by some, the home computer ports received mixed ratings in many of the gaming magazines, and there were vast differences between the different ports. One of the best ratings was 87% from Sinclair User, although Your Sinclair rated it a more modest 77%, with ACE giving one of the lowest ratings at 72%. However, in March 1992, ST Format gave the Atari ST version a rating of only 52%.
Created by Technos Japan themselves, the NES version received some of the most favourable reviews and ratings. One of the main reasons was that it featured nine missions, compared to four in most other versions. There was also a 2 player mode co-op mode, which was missing in the original game. The sequel was drastically different to the arcade version, but many believe it to be even better and more fun to play. The North American and PAL (including the UK) versions were published by Acclaim Entertainment.
On the Amiga, at least, not only was the sequel more visually appealing, but the enemy characters from the game were also given a makeover and gained many new martial arts moves. There were new traps, and the players weapons were also renewed, adding a new element to the game play. There were four missions to fight your way through; Heliport, Lumber Storehouse, Farm and Boss' Hideout.

The "Battle of the Ports" video above compares every version of Double Dragon II:The Revenge, and it's very interesting to see the vast differences between the 11 different versions.
Home computer ports of the arcade game were developed by Binary Design who had also developed the original. The 8 bit and 16 bit ports were released by Virgin Mastertronic during 1989, and were made available for the Commodore 64, ZX Spectrum, Amstrad CPC, IBM PC, Commodore Amiga and Atari ST. The NES version was developed by Technos Japan and released in 1990. Other ports were also released for the Famicom, PC Engine, Sega Megadrive, Gameboy and Xbox 360.
The ZX Spectrum version was originally priced at £9.99 for cassette and £14.99 for the disk version, and I would imagine similar pricing was used for the other 8-bits. As with most games from the era, a budget priced 8-bit version was released at a later date and sold for around £3.99. 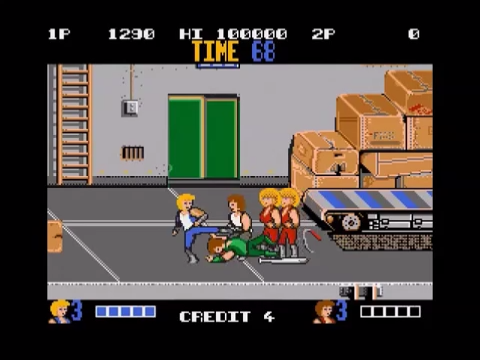 I remember that the ST version was particularly shoddy and plagued by numerous problems. After the title screen, there was no in-game music. The animation and programming was pretty poor, with enemies lining up and waiting to be punched, rather than coming for you in any planned attack. This wasn't the worst game I've ever played, and the background scenery was perfectly acceptable, but the game felt unplanned and rushed. 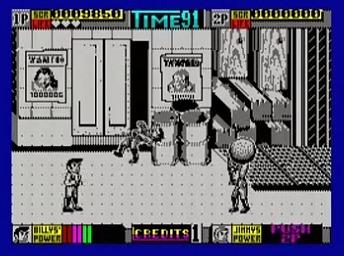 As you can see, the main gameplay area of the ZX Spectrum version was in monochrome, and not very appealing visually. The 48k version was pretty terrible, with the graphics only taking up half of the screen. Comments by Speccy fans on Youtube suggest that, apparently, you could kill all of your enemies (including the bosses) with one spin kick, making the game very easy to complete.
Overall, it would appear that the arcade version and the NES and Amiga ports were among the best versions of the game, with the ZX Spectrum and Atari ST versions being among the worst versions. Why not let us know your thoughts on the game in the comments box below. 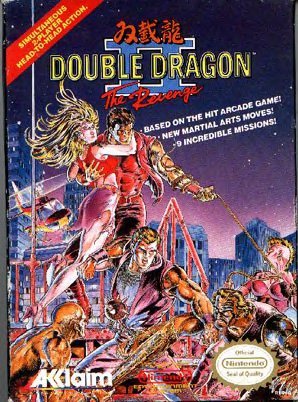