That video certainly brings back some fond memories, and it features the very same version of Dropzone I used to play back in the 80s on my Atari computer - it's definitely one of the best games from the 8-bit era.

The gameplay in Dropzone was based on the classic game Defender, in which you must rescue scientists stranded on the surface of a planet - in this case Jupiter's moon IO. Featuring horizontal side-scrolling, the game was first released on the Atari 800XL before being converted to the C64. 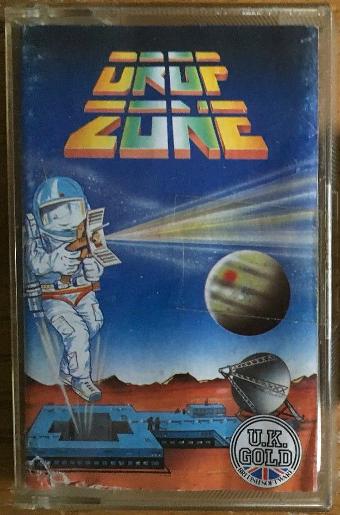 Dropzone (U.K. Gold) C64 cassette case. The design was exactly the same for the Atari version.

Although similar to Defender, this game was a lot faster and more polished. In fact, it really was made for the Atari 8-bits and was a fine demonstration of what the hardware could do in terms of speed and graphics capabilities.

I remember that the game was quite difficult, but addictive to play - with plenty of practice you would find yourself getting some pretty decent high scores. Reviews of the game were mostly very positive in the Atari magazines and Zzap! 64 magazine (for the Commodore 64) rated it 95%.

The designer of the game, Archer MacLean, signed up with U.S. Gold to distribute the game across Europe. However, after 18 months the royalties dried up and U.S. Gold claimed that the game had stopped selling, even though it continued to sell for at least another five years. A big legal battle ensued and MacClean eventually won an an out of court settlement after around four years of battling. Apparently, MacClean bought a Ferrari with the proceeds!

Maclean used the shell name of Arena Graphics as the developer, and he also created the successful martial arts fighting games International Karate and the sequel IK+. Maclean described the Atari as the "Porsche of home computers that is capable of running Dropzone 2.5 times faster than the C64". Nonetheless, the 64 version won a gold medal award and a 95% rating from Zzap! 64 magazine.

In the early 90s, Dropzone was ported to the Nintendo Entertainment System (NES), Game Boy and Game Boy Color, as well as the Sega Game Gear.

THE C64 VERSION OF DROPZONE

The gameplay of the C64 version is very similar indeed to the Atari game and just as responsive, although the title card certainly isn't as colourful. Many believe the Atari version to be superior, and it certainly looks a little brighter and more colourful. However, the differences are not vast and both games are very decent. 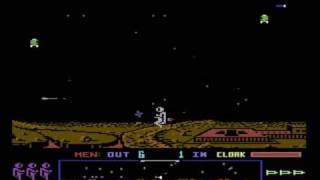 Dropzone screenshot of the C64 version