"A View To A Kill" was the theme tune for the James Bond movie (starring Roger Moore and featuring Grace Jones) and peaked at #2 in the UK for three weeks, being held off the top spot by Paul Hardcastle with "N-N-N-N-Nineteen".
The official video (see the playlist on the main Duran Duran page) is regarded by some critics as being a bit cheesy, but the lads were definitely enjoying themselves in their roles and doing something a bit different from the normal pop videos, at least! James Bond in the 80s was cheesy? How very dare you!
In the US the song reached #1 and still remains the only James Bond theme tune to reach the top of the Billboard Hot 100 charts. The track was written by Duran Duran and John Barry and was recorded with the help of a 60-piece orchestra.

Duran Duran were at the peak of their career in the mid 80s, and in the previous year (1984) they had reached #1 with "The Reflex" and #2 with "The Wild Boys".
"A View To A Kill" was the band's thirteenth single release. The B-side on all of the UK releases is "A View To A Kill (That Fatal Kiss)", which is an orchestral instrumental from the film by John Barry.

The video was directed by the legendary duo Kevin Godley and Lol Creme, and filmed around the Eiffel Tower in Paris. It mixes scenes from the movie with Duran Duran pretending to be special agents which involves a flying VHS video camera - this was long before drones were invented!
John Taylor is dressed in black and uses a gun which is disguised as a telescope. Simon Le Bon is dressed as a traditional french man with a black beret and vertically striped T-shirt. He is also wearing a white trenchcoat, black leather gloves and headphones which are attached to a bomb detonator disguised as a Sony Walkman. He uses it to denotate a bomb in a helicopter and an airship. Nick Rhodes is pretending to be a photographer with a female model. Andy Taylor plays a blind accordian player and uses one of the buttons to destroy Nick's camera. Roger Taylor is hidden in a van as the co-ordinator. 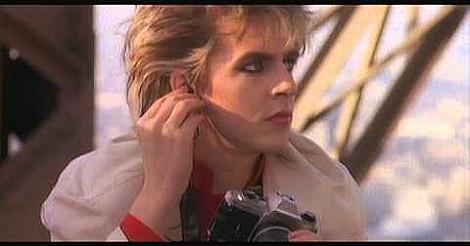 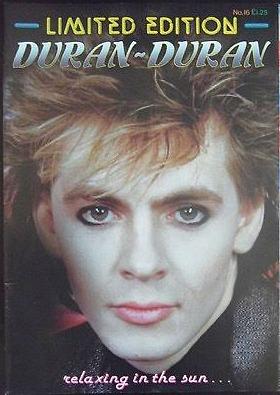 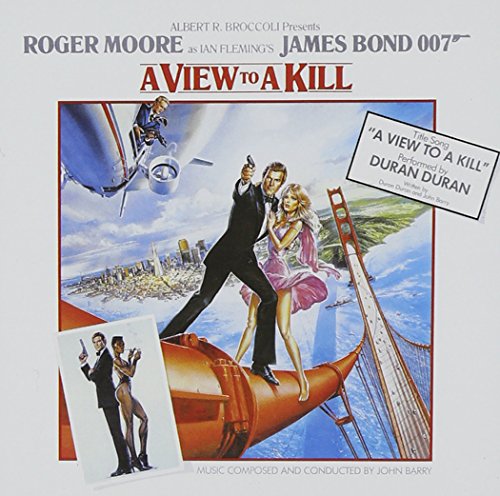 A View to a Kill soundtrack CD by John Barry. Including Duran Duran's hit single

Live at the Palladium