This is an excellent live performance of "Skin Trade", and Simon le Bon's vocals are on top form here. You can watch the official video on the main Duran Duran page.

Skin Trade was the second track to be released from the Notorious album, and the band's 15th single release overall. Released in February 1987, the song peaked at a disappointing #22 in the UK and only #39 on the Billboard Hot 100 in the US, although it made #3 in Italy.

Skin Trade was the first Duran Duran single not to make the Top 10 since My Own Way in 1981 (which reached #14 in the UK), and the change of style and direction probably have had something to do with this and it didn't go down too well with some fans, although many have since grown to like it. They could also have chosen a better designer for the single's plain red front sleeve, which tells you absolutely nothing about the song.

The actual music was finished before lead singer Simon Le Bon had completely penned the lyrics. The song's title was lifted from a book by Dylan Thomas entitled Adventures in the Skin Trade, which John Taylor was reading during the period when the band were recording their Notorious album, although not during the actual recording sessions, I would imagine!

The song's style and sound is quite different to previous singles with Le Bon's falsetto sounding very Prince-like. Horns also feature strongly in the song, and it was a brave move for the band to try something a bit quirky. I always liked the track, although the record-buying public weren't so keen, sadly.

The next single Meet El Presidente was the last single to be released from the Notorious album and didn't fair any better, peaking at #24 in the UK, but they were still breaking into the Top 30, at least.

The video's directors were Peter Kagan and Paula Greif who had previously worked on Notorious. The band became well-known (you could say notorious!) for the use of gorgeous ladies in their videos. The Skin Trade video was no exception, and featured Tatjana Patitz, a German supermodel, along with rotoscope effects by the bucket load. 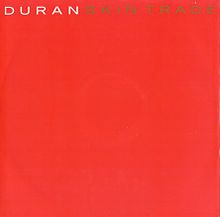