DURAN DURAN LIVE AT THE PALLADIUM

Here is a real treat for all Duran Duran fans. We are pleased to bring you the official video of the band in concert at The Palladium in New York City. The footage was recorded live on 31st December 1982.
The Palladium was used as a music venue during the 1970s and 80s, and became renowned for its top quality acoustics. It is the venue that many British heavy metal and punk acts made their debut performance in the U.S.
Duran Duran open with an energetic performance of "Rio" with extra saxophone towards the end. John Taylor's bass playing is exceptional, not only on this song, but throughout the concert. Indeed, you just don't get smokin' bass lines like this anymore, which is something I really miss from the 80s.
At the end of "Rio", Simon Le Bon introduces himself, shouting out "Good evening New York, good evening America. We came 2000 miles and we wanna see you dancing".
Next, we have a couple of tracks from the band's second album Rio. "Hold Back The Rain" is track 5 from the original LP. For the third song, "New Religion" (track 6) things are really hotting up, so much so that Le Bon ditches his white suit jacket.
The opening to the band's sixth single "Save A Prayer" is instantly recognisable, although in the U.S. the song wasn't a hit, as it wasn't released as a single here until January 1985, reaching #16. The original 1982 video was, however, popular on MTV.
"Hungry Like The Wolf" is next and was the band's new single at the time. The song became Duran Duran's first hit in the U.S., reaching #3 in March 1983, thanks partly to heavy rotation on MTV. At the end of the performance, Le Bon let's out a howl and then introduces the audience to the band's debut UK single "Planet Earth".
We're now over 30 minutes into the concert, and without a pause, it's straight into the up tempo "Careless Memories", which was the band's second single from 1981, and just happens to be a favourite of mine, although it failed to become a major hit.
The band's third hit and breakthrough single "Girls On Film" is the final song, and one in which Le Bon introduces the band, allowing each member to give a short solo performance. As any devoted Duranie will know, using this track for the finale became a staple for the band's live performances. 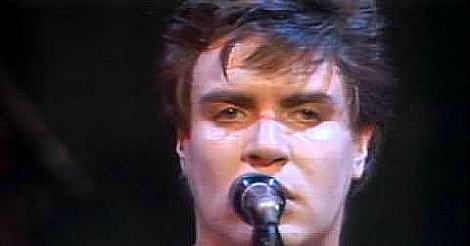 Duran Duran on The Tube

Is There Something I Should Know