"The Reflex" was the eleventh single by Duran Duran, and was released globally on April 16th 1984. It became the band's most successful single, topping the charts in the UK, U.S., Ireland, Holland and Belgium and reaching the top 5 in many other countries.
The song stirs up many memories of my final months spent at school in 1984, just before venturing into the big wide World. Some of the friends I made I have never seen since, so listening to the single often produces a tear or two, even though that is not its intention, of course! 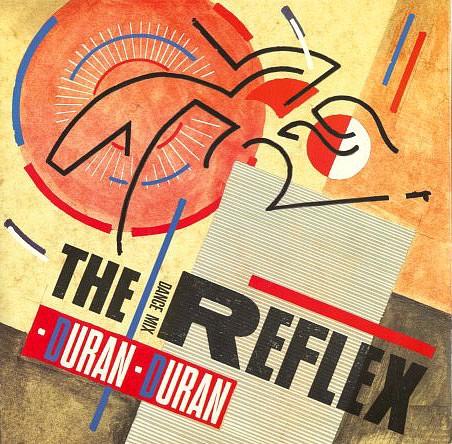 The track was released as the third and final single from the band's third album "Seven and the Ragged Tiger". However, the song was remixed by Nile Rodgers for release as a single and sounds quite different to the original album version, with enhanced percussion and stuttering effects, and that additional fart-like sound! Such was the success of Rodgers work, he was also asked to produce "The Wild Boys" single and the album "Notorious".
"The Reflex" was one of two singles to top the UK and U.S. charts. The other being "Is There Something I Should Know?" in the UK in 1983, and "A View To A Kill" in the U.S. during 1985.
The steel drum part was created by Nick Rhodes using a Roland Jupiter-8 synth. Producer Ian Little added a wood-block part to give extra depth. Other producers on the single were 80s record producer Alex Sadkin and the band themselves.

"The Reflex" entered the UK singles chart at #5 on 22nd April 1984, climbing to #1 on 29th April and remaining their for four weeks. During this time, they held Phil Collins at No.2 for the first two weeks with "Against All Odds (Take A Look At Me Now)", and The Pointer Sisters were at No.2 for the remaining two weeks with "Automatic". Neither of these singles made it to No.1. 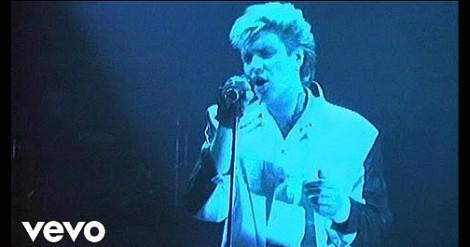 The video features footage of the band performing live at an evening concert at Maple Lead Gardens in Toronto, Ontario during their Sing Blue Silver Tour. Close-up footage of the band was shot by director Russell Mulcahy in the afternoon.
Fearing that it would be seen as just an ordinary concert video, the band insisted on adding something a little extra in the form of silhouettes of two naked models wearing bondage gear appearing on the video screen above the stage.
A computer-generated waterfall was also created which appears to pour out of the screen and onto the audience at 3:21. Due to the limited technology at the time, the effects aren't very realistic and real water was thrown onto one audience member (maybe an actor) to give added realism. Unfortunately, the small amount of water used did nothing to enhance the illusion. Nonetheless, at least the band tried to add some quirkiness to the video.

The B-side on the UK 7" and 12" singles features a live version of "Make Me Smile (Come Up and See Me)", originally performed by Steve Harley & Cockney Rebel. Harley actually joined the boys on stage for the performance at Hammersmith Odean in London on 16th November 1982. A Dance Mix of "The Reflex" lasting for 6 minutes and 35 seconds was also included on the vinyl 12".
For the United States release, a live recording of "New Religion" is included on the 7". This was performed at The Forum in Los Angeles on 7th February 1984. The A-side is labelled as "The Dance Mix Edited" but is just the regular 7". The Dance Mix of "The Reflex" on the 12" is the same as on the UK version. 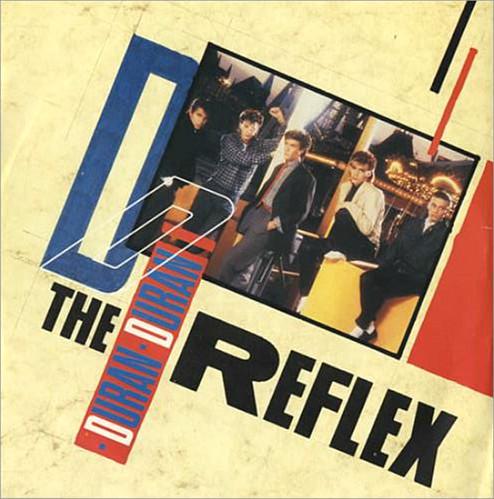 The French 7" sleeve (above) is almost identical to the U.S. sleeve

Duran Duran performing "The Reflex" on Top of the Pops

Lyrics for The Reflex