"Sad Songs (Say So Much)" was released as the lead single from Elton John's eighteenth studio album Breaking Hearts, which was released on 18th June. The single entered the UK singles chart at No.49 on 29th May 1984, making it the seventh highest new entry that week. The song reached a peak position of No.7 on 17th July, while Frankie Goes To Hollywood were at No.1 with "Two Tribes". 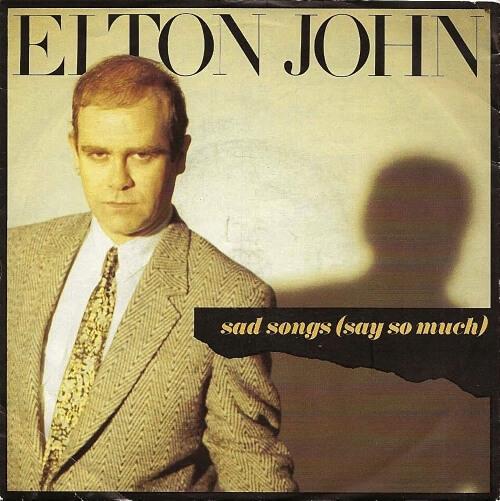 Penned by Elton John and Bernie Taupin, and produced by Chris Thomas, this song was the tenth and final track on the album. It also reached No.5 on the Billboard Hot 100 in the U.S., and No.4 on the Canadian Top Singles Chart. The single reached the top 5 in numerous other countries.
Interestingly, the single sleeve features Elton smartly dressed in a suit and tie and wearing a side parting, He is without his trademark glasses.
The video was directed by the Australian director Russell Mulchay, who directed 20 videos for John, as well as 10 videos for Duran Duran, and many videos for other 80s artists. It was filmed around Rushcutters Bay in Sydney. It is mostly black and white, but features limited splashes of colour, such as for the neon Hotel sign and Elton himself. The setting is a dark, wet and misty street and features dancers performing dance routines (as they do!).
The lyrics pay tribute to sad songs, with elton asking us to "turn 'em up!" when they're on the radio. My favourite line is "Cause from the lips of some old singer, we can share the troubles we already know".
The song was ranked at No.28 in The Guardian's "Elton John's 50 Greatest Songs" list published in 13th Sept 2018.
While there isn't a huge difference between the running time of the three versions of the song, the album version is the longest at 4 minutes 55 seconds. The 12" runs for 4:50, and the 7" 4:07.
The B-side on the 7" and 12" vinyl singles is "A Simple Man", and was written by Elton and Gary Osborne.

Create Your Own Karaoke Version of Sad Songs (Say So Much)

I Guess That's Why They Call It The Blues