Always - The Very Best of Erasure

As of 2021, Erasure have, released eighteen studio albums (their most recent being Neon), and "It Doesn't Have To Be" was the synthpop duo's second single to be released from the second album The Circus. Released six weeks before the album, this follow-up to their first Top 40 single Sometimes (this reached #2 in the UK) was the duo's fifth single release overall, reaching #12 in the UK singles chart.

The 12" vinyl featured the Boop Oopa Doo Mix, the Betty Boop Mix and another track entitled In The Hall Of The Mountain King. A special limited edition 12" vinyl release featured three different tracks; The Cement Mix, Heavenly Action (this was previously released as the second single from the boys debut album Wonderland, but only reached #100) and a new version of In The Hall Of The Mountain King.

Unlike the previous album, The Circus was a commercial success, peaking at #6 in the British album charts (it was far less successful in America, reaching only #190) and achieving Platinum sales. Two more songs were released as singles from the album, the title track and Ship Of Fools which were both Top Ten hits.

I quite like the design of the single sleeve to "It Doesn't Have To Be", which uses the same colourful circus theme from the album sleeve.

The video starts with a headache-inducing, swirly close-up of sparklers, before we see lead singer Andy Bell who is wearing a denim jacket and a T-shirt that actually isn't white, just for a change!

Lyrics for It Doesn't Have To Be 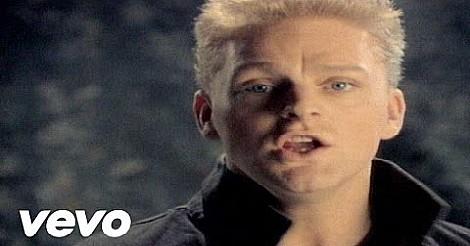