The first video clip features some pretty amazing Etch A Sketch artwork, which leaves my own lousy efforts looking even more rubbish than they already were!

Originally available in the 1960's, the original Etch A Sketch drawing toy is now considered a classic. In fact, it's so popular that it's available to buy once again. The toy has appeared in both Toy Story films and Elf movies.

When I was a child in the 1970s, this toy kept me amused for ages. Needing no batteries, pens or pencils, you would simply turn the knobs to draw horizontal, vertical or diagonal lines. Of course, back in the day it seemed like magic to many kids, but what actually happens is that by turning the knobs you move a stylus that displaces aluminium powder on the back of the screen, leaving a solid line - just don't tell your kids!

When you got fed-up with your picture, you would simply shake to erase it and start all over again. Or if you had an annoying brother, he would shake it for you - before you had finished your work of art!
So you want to know how it erased the picture? Well, when you turn it upside down and shake it, polystyrene beads smooth out and re-coat the surface with aluminium powder.

With no messy ink or paints, this toy was ideal for parents trying to keep their kids amused on a wet afternoon, and we have plenty of those here on the UK! 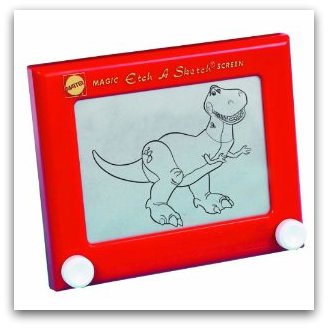 A lovely etch-a-sketch of a cartoon-style dinosaur
Etch A Sketch was invented in the 1950s by the French inventor and toy maker André Cassagnes. It was first introduced to the U.S. on 12th July 1960, selling for $2.99 (around $26 or £20 today). Produced by the Ohio Art Company, over half a million units were sold in the first year.
1987 saw the launch of the Etach A Sketch Animator (known as The Animator in European countries) whcih featured a dot matric LCD display. It could store your pictures, which meant you no longer had to lose your hard work!
A more advanced version was released in 1988. Looking like a mini laptop, The Etch A Sketch Animator 2000 featured a bigger LCD screen, much more memory, and the knobs were replaced with a touchpad. It also included a cartridge slot for games. 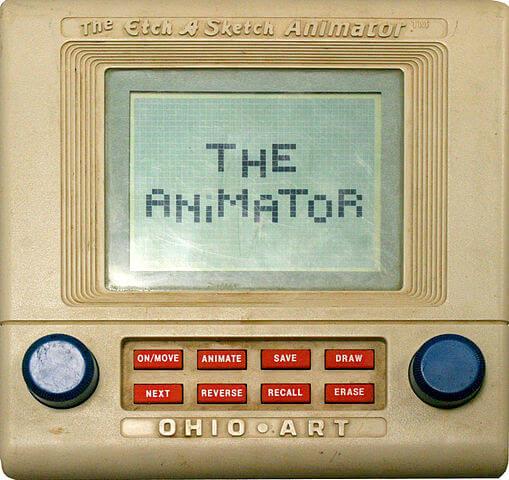 Public domain image of The Etch A Sketch Animator (US version) - free to reuse. Source: Wikipedia