Eurythmics in the 80s

There is no doubt in my mind that Eurythmics were right up there with the best of the 80s synthpop duos. When I first heard the goosebump-inducing, electro-pop sound of Sweet Dreams (are Made of This) on Radio 1, I couldn't wait to rush down to Woolies and buy the 12 inch single - how I miss Woolworths.

Both Dave Stewart and Annie Lennox were previously in the British post-punk, rock and pop band The Tourists, who had two top ten hits in the UK with I Only Wanna Be With You and So Good To Be Back Home Again. 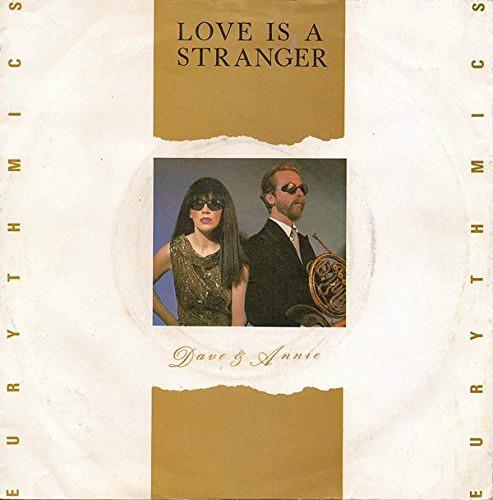 The band started life as The Catch in 1975, and the original line-up included the guitarist and singer/songwriter Peet Coombes, Dave Stewart and Annie Lennox. Coombes and Stewart moved to London and met Lennox after she had abandoned her flute and keyboard music course at the Royal Academy of Music.

Bass guitarist Eddie Chin and drummer Jim Toomey joined the band in 1977 and they became The Tourists, releasing three albums and six singles. Despite some commercial success, the music press never warmed to the band and they disbanded in 1980.

Lennox and Stewart were quick to form Eurythmics, although it would be another three years before they achieved any commercial success. 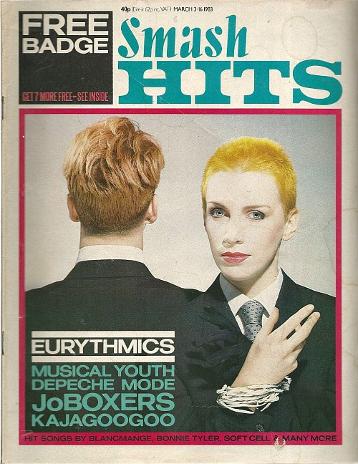 The duo released their debut album in October 1981 which included ten tracks. In The Garden was released on LP and cassette by RCA Records, but failed to chart. Two tracks were released as singles. Never Gonna Cry Again reached #62 in the UK charts and Belinda which failed to chart.

On 2nd April 1982, Eurythmics released a third single entitled This Is The House, which they recorded on their 8-track home studio - this was financed by a bank loan. Sadly, the single failed to even chart.

A fourth single was released on 18th June 1982. The Walk was, once again, recorded using an 8-track home studio and charted at #89 in the UK.

Both This Is The House and The Walk were included on the duo's Sweet Dreams Are Made Of This album.

LOVE IS A STRANGER

I was deeply into electronic music from quite an early age, and this was the first electro-pop record that I bought for myself. I regret only buying it on 7" vinyl, though. Why didn't I purchase the 12 inch? Damn fool!

Love Is A Stranger was the first single to break in the Top 40 for Eurythmics, reaching #6 in the UK and #23 in the U.S. The track featured on the band's second album Sweet Dreams (Are Made Of This) which achieved Platinum sales in the UK.

Initially, "Love Is A Stranger" failed to hit the top 40, but after the their first commercial success in the UK with "Sweet Dreams", it was re-released and climbed into the top 10.

I loved the synth-based sound of Dave and Annie's earlier singles - "Sexcrime - 1984" was another favourite of mine - but a more rock-based sound was to follow, leading to many more years of big chart hits, such as "Thorn In My Side" and "Would I Lie To You".

SWEET DREAMS ARE MADE OF THIS

When the Americans thought Annie Lennox was a transvesite!

Sweet Dreams was the title track from the duo's second album became their breakthrough hit, reaching #2 in the UK and topping the Billboard Hot 100. The B-side was an alternate version of I Could give You A Mirror and on the 12" a third track was included entitled Baby's Gone Blue. Sweet Dreams is widely regarded as Eurythmics' signature tune.

Annie Lennox's androgynous look in the video caused much controversy in the U.S. When she removed her curly, blonde wig to reveal her close-cropped, red hair, many people mistakingly believed she was a transvestite.

The first single to be lifted from the duo's third studio album, Touch, was a fabulous synth ballad. Released in June 1983, the video featured more gender confusion when Annie Lennox kissed a male version of herself. A number of 80s pop stars appeared in the video including the ladies from Buck Fizz, Kiki Dee, Bananarama, Hazel O' Connor and Kate Garner from Haysi Fantayzee.

Bananarama member Siobhan Fahey married Dave Stewart in 1987, although by 1996 they were divorced. They produced two sons, Sam and Django James. 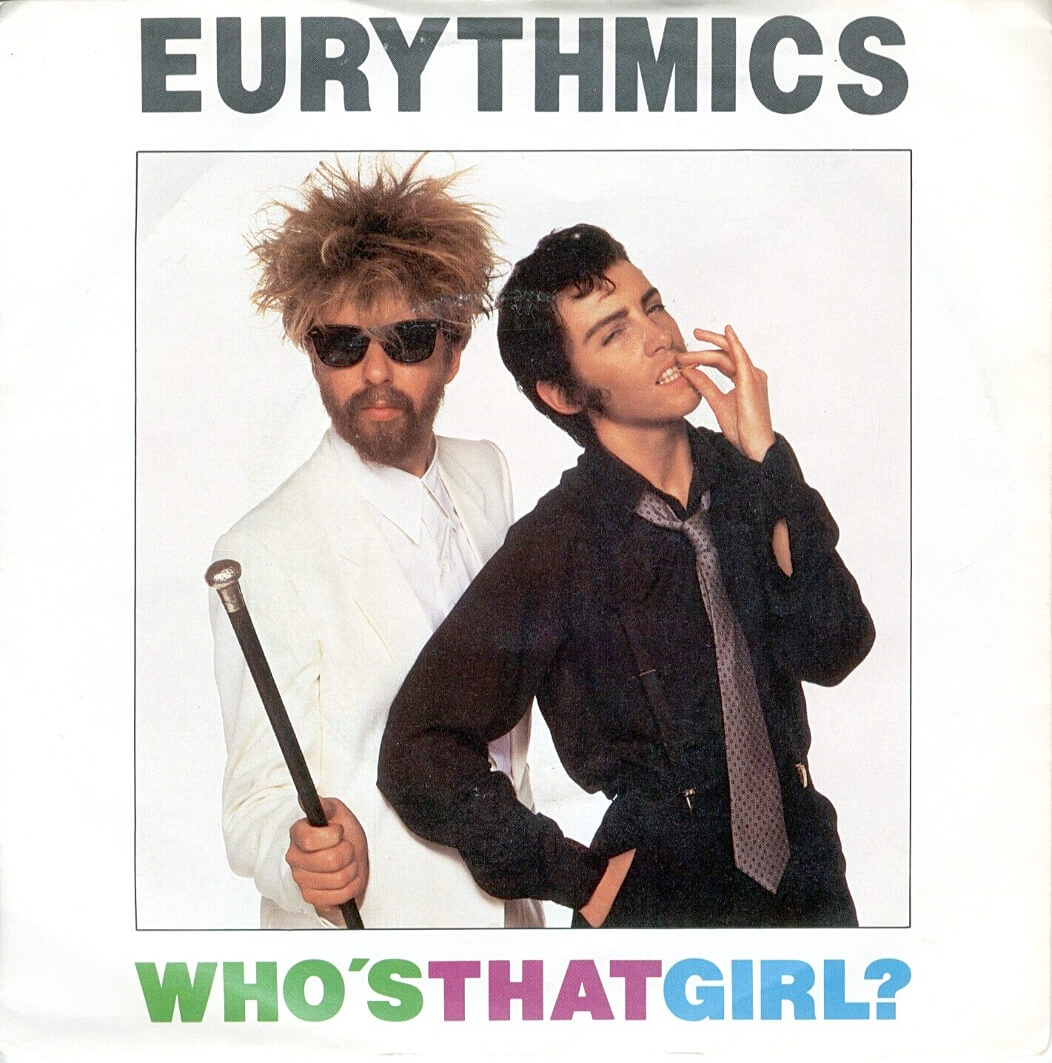 Dave with Annie as Elvis on the sleeve of Who's That Girl?

RIGHT BY YOUR SIDE

The second single from Touch was released in October 1983, reaching #10 in the UK, and #29 in the U.S. It featured a tropical flavour with a calypso provided by synthesized steel drums and marimba sounds. 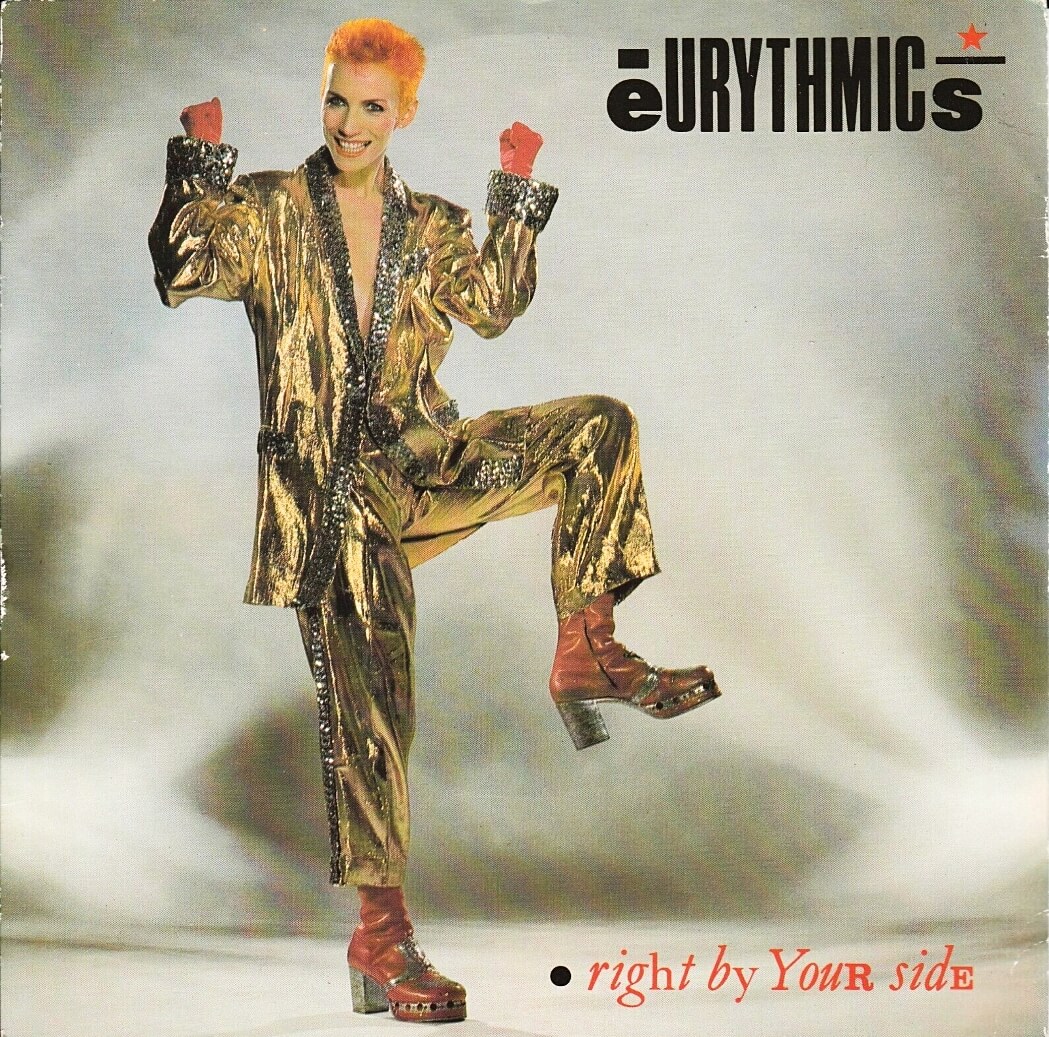 This very British song was released in 1984, and it's one that I played pretty frequently come rain or shine. The track was the third single to be released from the Touch Album (the first in the U.S.). It was the duo's fifth consecutive top ten hit single and reached No.8 in the UK and No.4 in the U.S. on the Billboard Top 100. 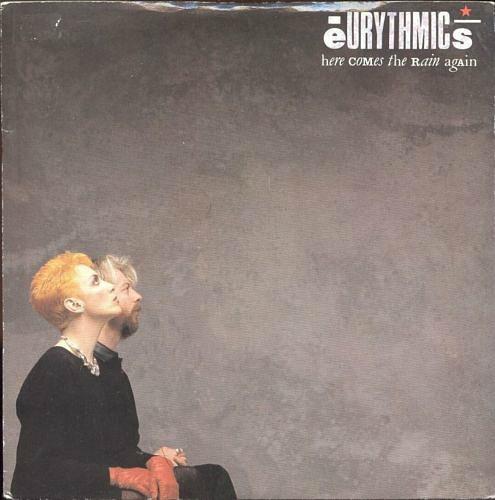 The single cover from Here Comes The Rain Again

WOULD I LIE TO YOU?

"Would I Lie To You?" was the lead single from the pop duo's fourth studio (Be Yourself Tonight) marked a significant change in musical direction, with a more rock orientated sound. The track included a full backing band and was produced by Dave Stewart. Chart performance in the UK was slightly disappointing - I've never understood why it didn't reach the top ten - but fared better in other countries, topping the Australian charts and reaching #5 in the U.S., Canada and New Zealand.

Although There Must Be An Angel was the duo's most commercially successful single, I never really liked it as much as most of their other 80s songs. I much prefer the duo's earlier electronic sound, although I also like some of their more rock-orientated tracks such as Thorn In My Side. For me, the highlight of this song is the harmonica solo by Stevie Wonder. This was the second single to be released from the band's fifth album Be Yourself Tonight, and topped the UK charts, but only managed #22 in the U.S. 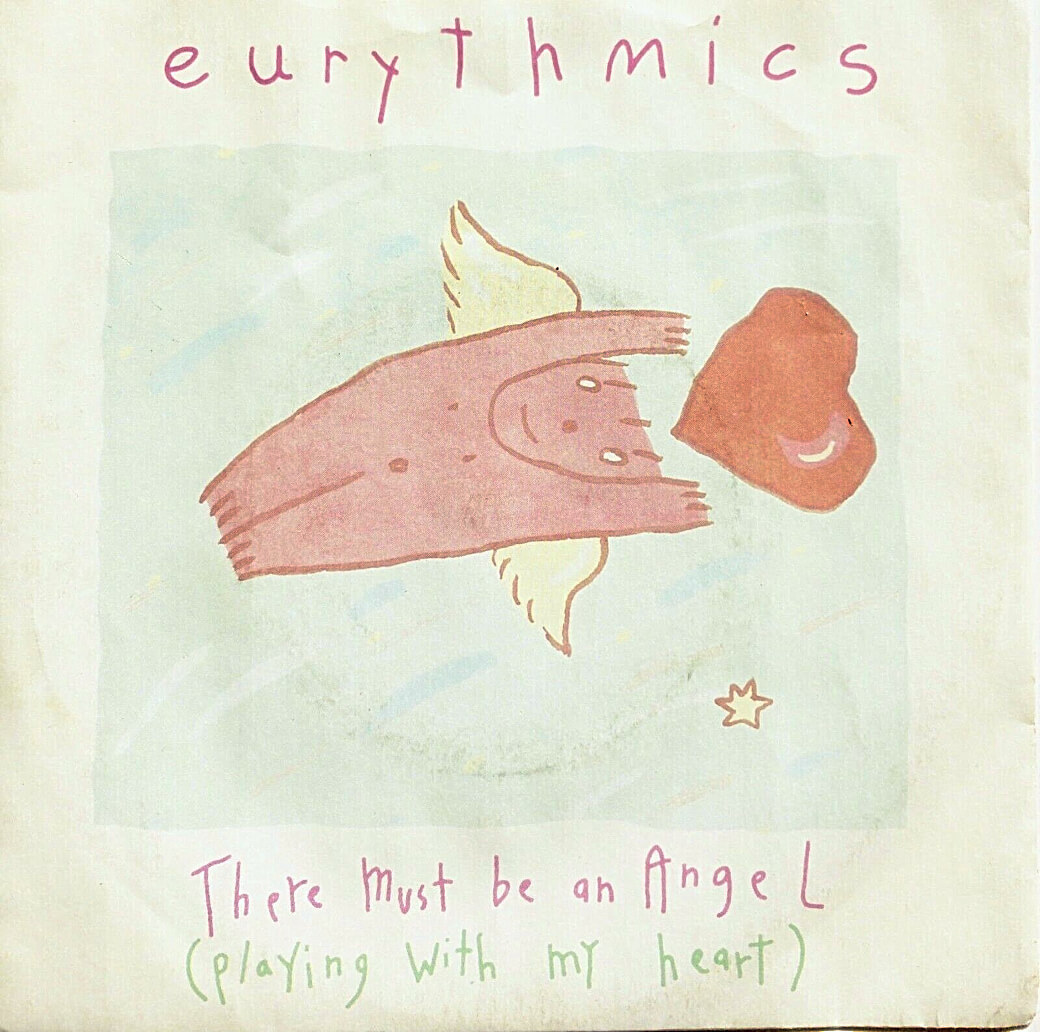 Sisters Are Doin' It For Themselves

This memorable feminist anthem featured soul queen Aretha Franklin, who provided the vocals alongside Annie Lennox. It was released in October 1985.

Video and Song Facts for Sisters Are Doin' It For Themselves

IT'S ALRIGHT (BABY'S COMING BACK)

The final single from Be Yourself Tonight was accompanied by an innovative video which mixed live action with computer animation. Released in December 1985, the song reached #12 in the UK, but could only peak at #78 in the U.S.

Eurythmics debut album was released in October 1981 but did not chart anywhere. Two singles were released from the ten track album;

Never Gonna Cry Again (#63) and Belinda which did not chart. 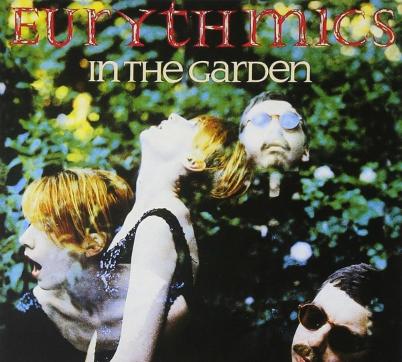 SWEET DREAMS (ARE MADE OF THIS)

Released in January 1983, Eurythmics second studio album reached #3 in the UK and was the duo's breakthrough album in terms of commercial success. Four tracks were released as singles; 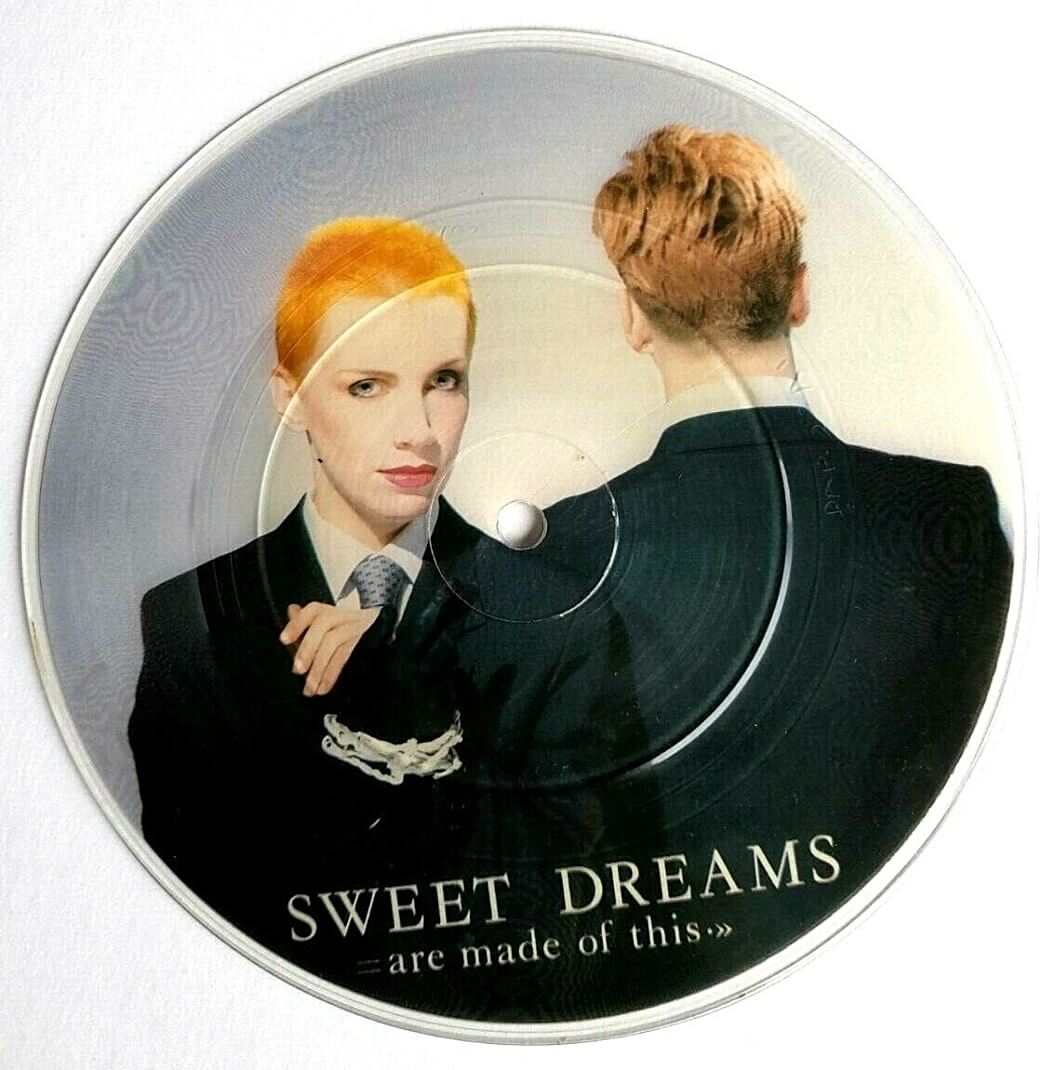 Featuring an iconic LP sleeve, the duo's third studio album was released in November 1983. It reached the top of the charts in the UK and New Zealand, and peaked at #7 in the U.S. Three tracks were released as singles; 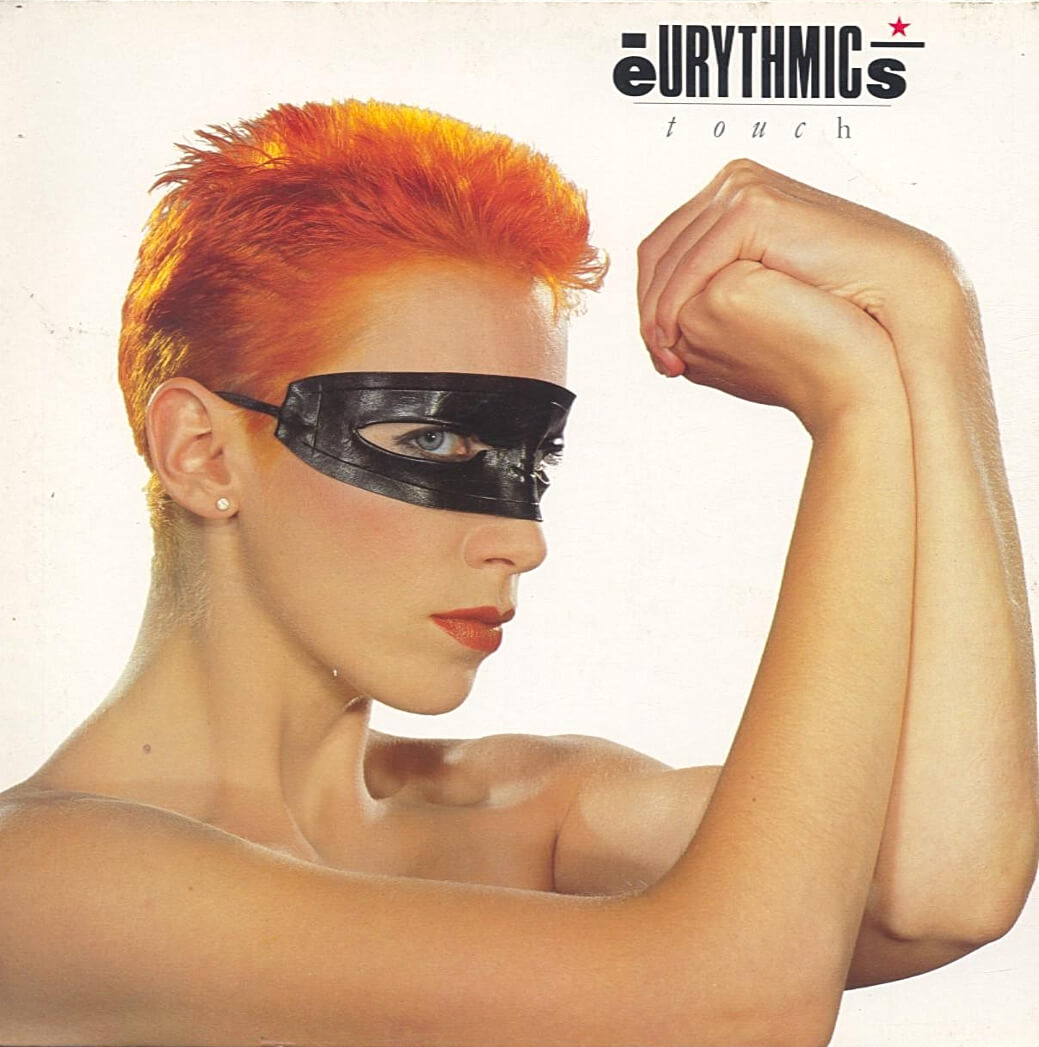 Eurythmics fourth studio album was a soundtrack album for the film Nineteen Eighty-Four which was based on George Orwell's novel. Released on 12th Nov 1984, the album peaked at #23 in the UK. Two tracks were released as singles; 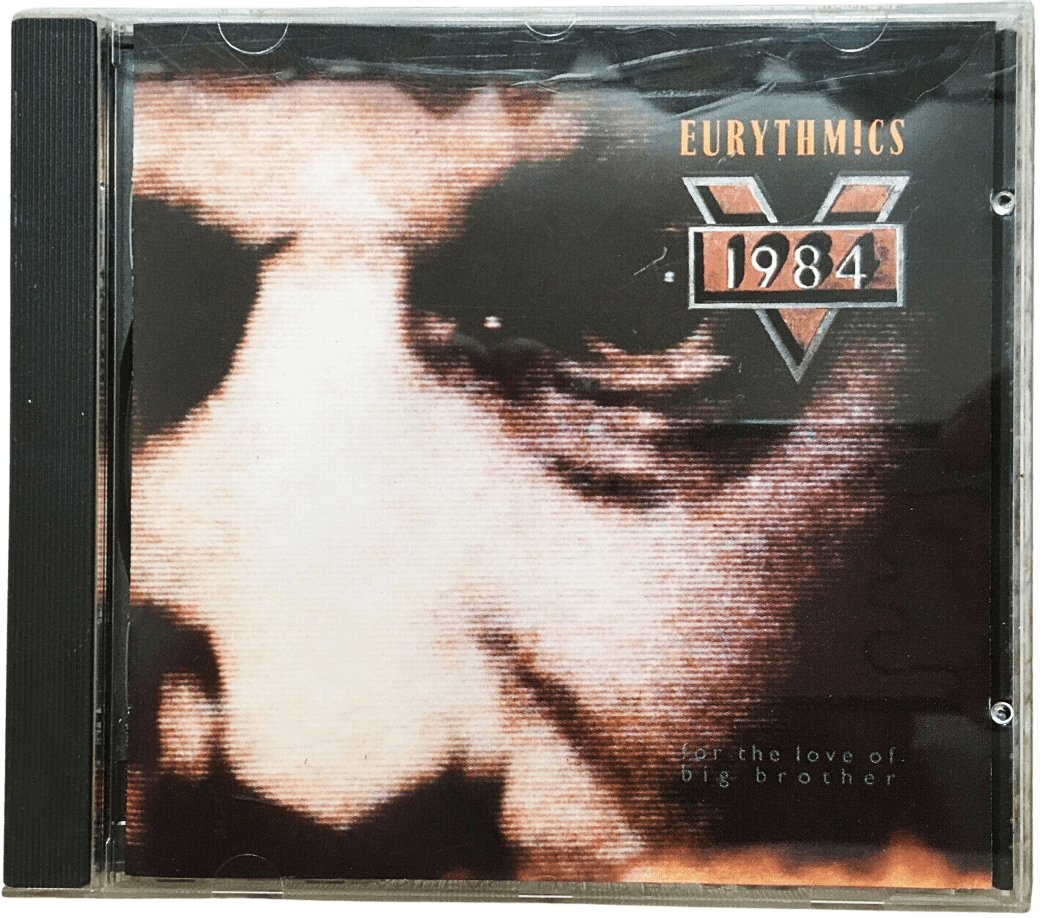 Eurythmics fifth studio album was released on 29th April 1985, reaching #3 in the UK and #9 in the U.S. Four of the nine tracks were released as singles; 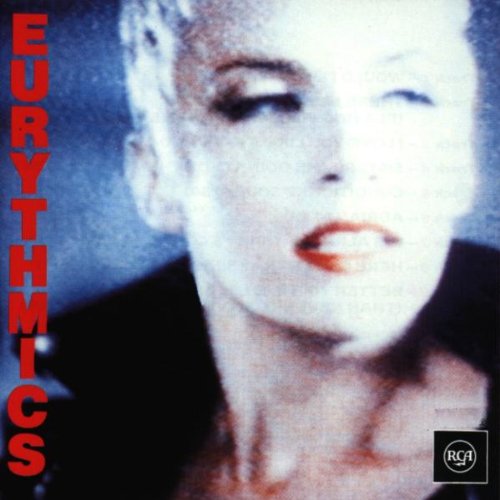 Be Yourself Tonight CD Album - EurythmicsBUY from AMAZON

Eurythmics sixth album was released on 30th June 1986 and continued with the rock-orientated sound. Four of the ten tracks were released as singles; 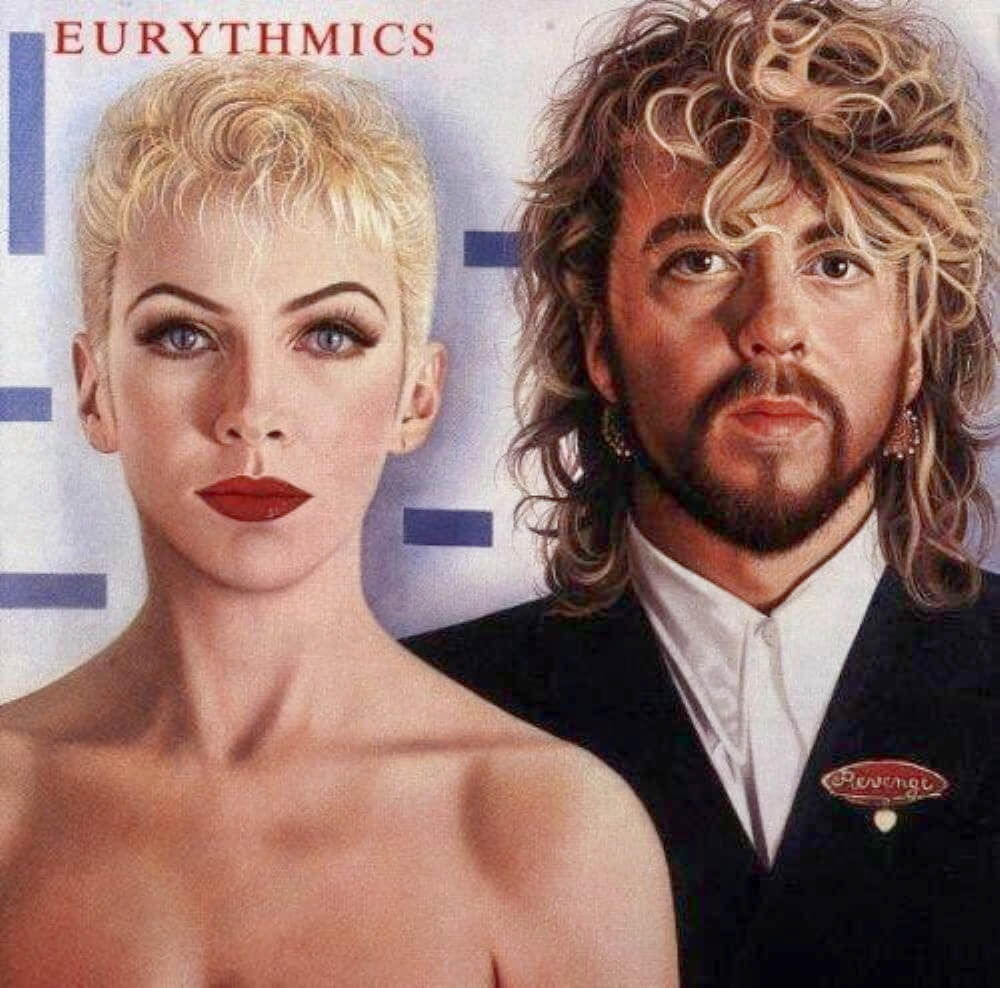 The duo's seventh album was released on 9th Nov 1987, peaking at #7 in the UK. Four of the twelve tracks were released as singles;

Unusually, the best performing single was the last to be released from the album. 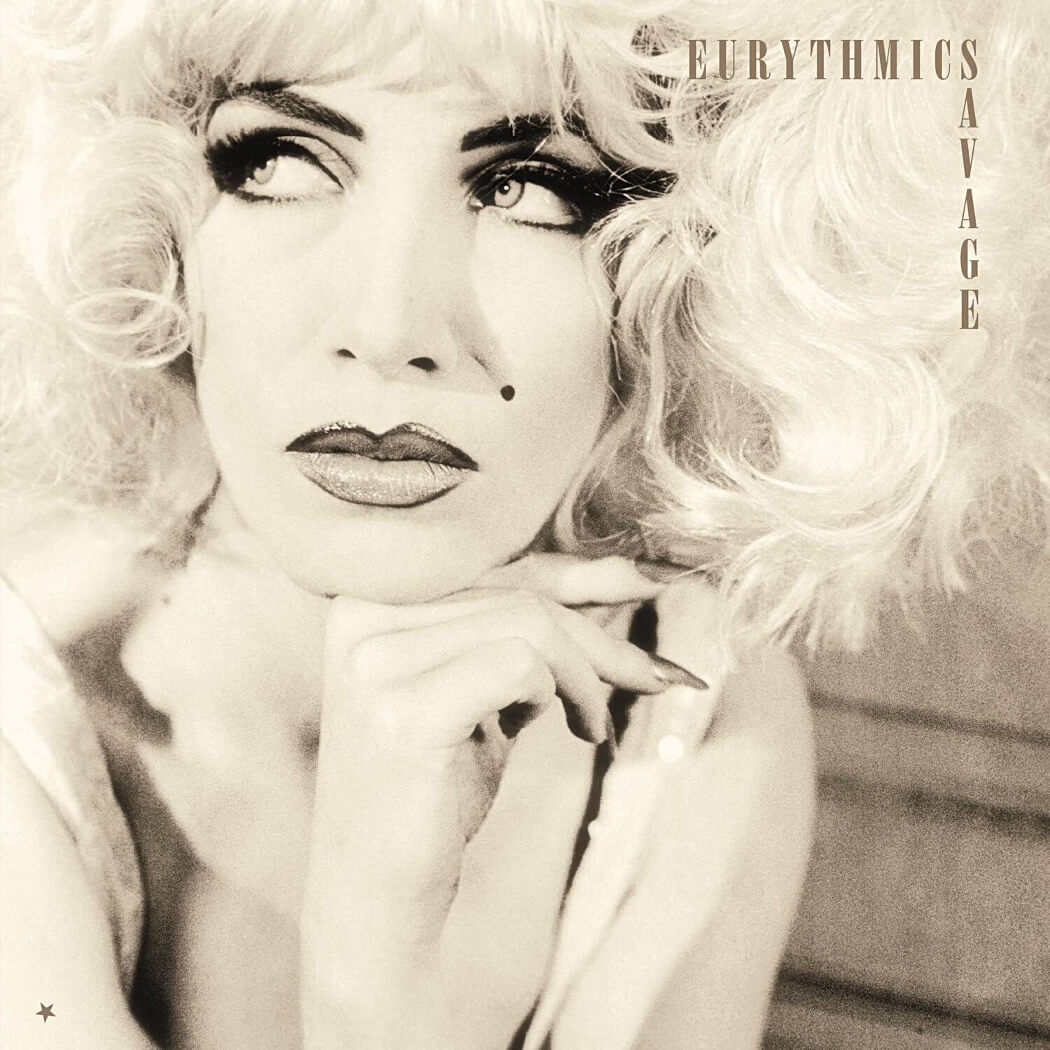 We TOO ARE ONE

The final album to be released in the 80s (the duo's eighth studio album overall) was released in Spetember 1989 and entered the UK album charts at No.1. A fine way to end the decade then, and four of the ten tracks were released as singles; 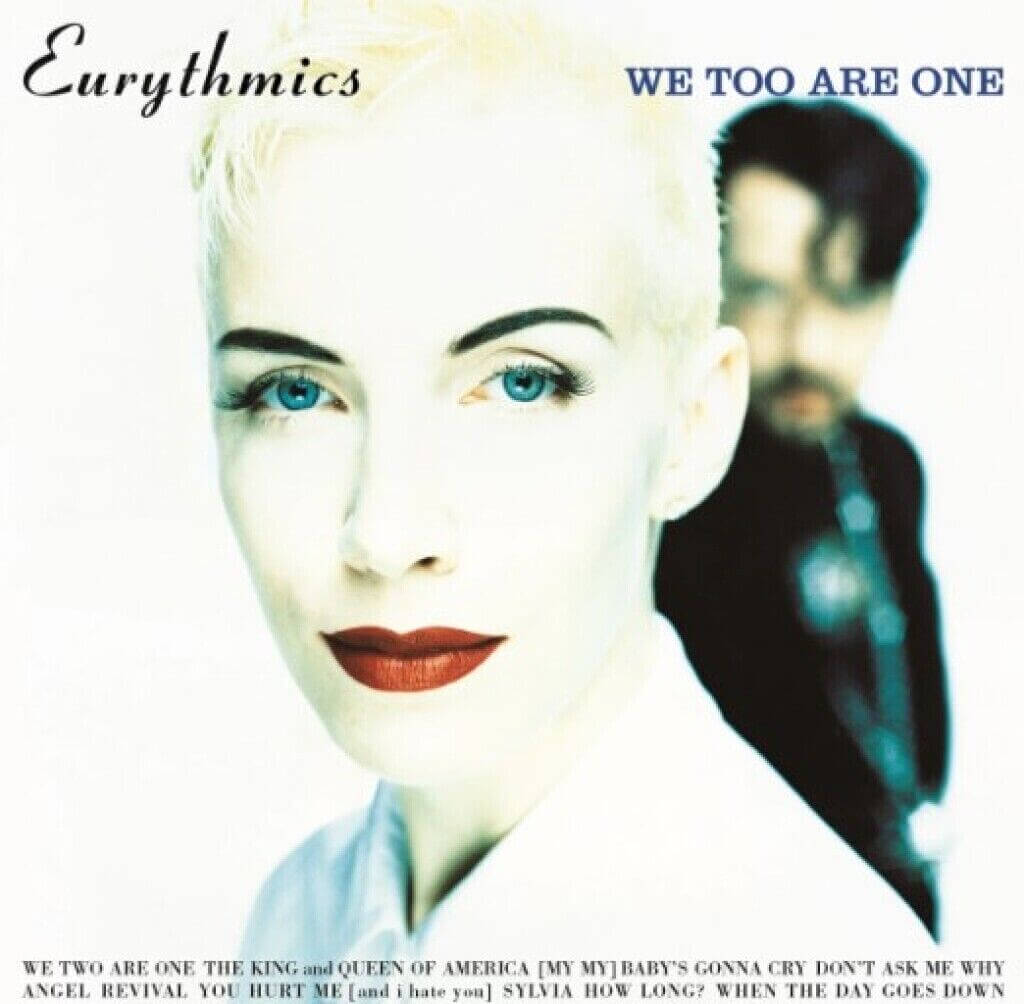