for Men and Women (UK and US) 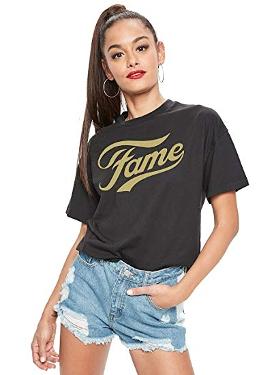 Now, imagine being transported back to the summer of 1980. There was one film that every young girl wanted to see and it certainly wasn't Friday The 13th! It was, of course, the American high school musical movie Fame.

However, the popularity of Fame didn't end in 1980. The film spawned a TV series which was particularly popular here in the UK, and in 1982 Irene Cara's theme tune topped the UK charts.
The Kids from Fame also had a number of chart hits including Hi Fidelity and Starmaker which both reached the Top 5, and their self-titled album topped the UK album charts for a whopping 12 weeks.Yes, Fame mania became a major part of the 1980s for teens and pre-teens, at least, and with quite a number of adults, too, I would imagine.

Whether you want to rekindle some fond memories of your teen years or you're looking for a T-shirt idea for an 80s party or event, then a Fame T-shirt solves both these problems in one! You could also create a fun, 80s workout or dance costume. Just add leg warmers, leggings and sweatbands.
This pink crop top featured above is ideal for creating a fitness look. 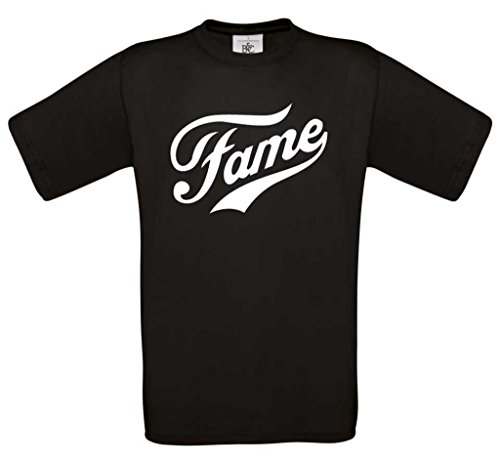 This Fame logo T-shirt by Tees & Biscuits is available for men in three colours; black, navy or red. It's designed and printed here in the UK and the logo is nice and large, and printed using high quality vinyl onto a 100% cotton, ringspun T-shirt.So far, I've only linked to suppliers at Amazon UK. I can also recommend checking out the suppliers at ebay as you can often find a bargain or two here. 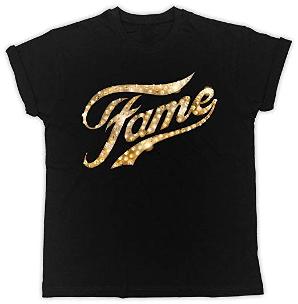 Now I really like this sparkling gold lights Fame the Musical tee, which is hand-made here in the UK, and it's been printed using the latest technology for top quality. Sizes Small to XL are available.

This black T-shirt features the original red Fame TV Series Logo, which has been printed onto a pre-shrunk cotton T-shirt. THis one is available in sizes small to XXL.

I found this exclusive design at Redbubble. The T-shirt is unisex and is available for sizes small to 3XL. 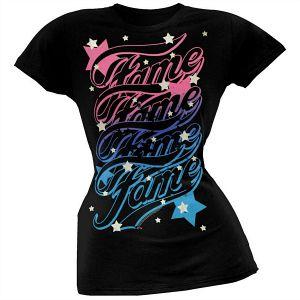 This Quad Logo T-shirt with silver stars looks pretty awesome. Sadly, the supplier has disappeared, but I hope to find another one soon. Watch this space! 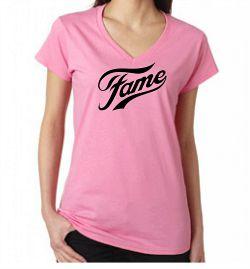 I found this baby pink Fame tee on ebay and it's also available in classic black and white colours. Sizes range from 10 to 16 and I always prefer a V neck as they tend not to go baggy around the shoulders - it's so annoying when that happens! By the way, I've linked to a search page for Fame T-shirts (filtering out Lady Gaga!), as individual listings disappear every few weeks.

This slim fit tee that is only one colour available, although the white tee was a popular choice back in the 80s, so it has a very authentic retro feel. You can buy this one from the Vintage Magazine Company at Amazon.