This free online game (PC only) is a retro style, sideways scrolling action shooter in which you play the role of Fireman. You may remember that he was the enemy with the flaming head on the classic NES game Mega Man which was released in 1987.
Now, the Fireman's downfall is that he's a bit hot headed - literally! He'll face some pretty challenging enemies, including some who hide under their shell giving them protection from your fire power - these only come to life when you approach them. Others can jump platforms, some have copter helmets, while some stay in one place but can spin around firing in all directions. You will certainly have your work cut out to make it through the levels.
Thankfully, there is no timer and you can take as much time as you want. However, I would suggest not hanging around for too long in one place, as in certain areas enemies will keep appearing and you'll have a relentless battle on your hands.
Instructions: Select "Start Game" using your mouse or the arrow keys and enter button. You can skip through the storyline and cut scenes using by pressing "enter" to go straight to the game. Use your arrow keys to move, Ctrl to fire and Shift to slide. To jump onto higher platforms keep the up arrow key pressed down while moving left or right. Destroy all enemies (and also avoid their weapons) to progress to the next level.
Play Fire Man Incoming Storm 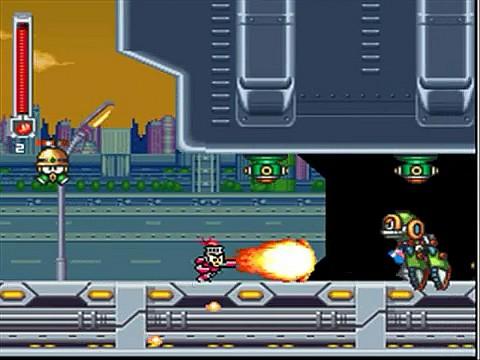