"FREE NELSON MANDELA" BY THE SPECIAL A.K.A.

"Free Nelson Mandela" (some versions were released as just "Nelson Mandela") was the first hit for the new line-up of The Special A.K.A. (also known as The Specials) without Terry Hall, Neville Staple and Lynval Golding. The song was penned by one of the original founder's of the band, Jerry Dammers, with Stan Campbell on lead vocals.
The anti-apartheid song was a protest for the release of Nelson Mandela, as suggested in the self-explanatory song title! At the time, the majority of the British public knew little about Mandela, and what is arguably the finest protest song of the 1980s helped bring his plight into the limelight. 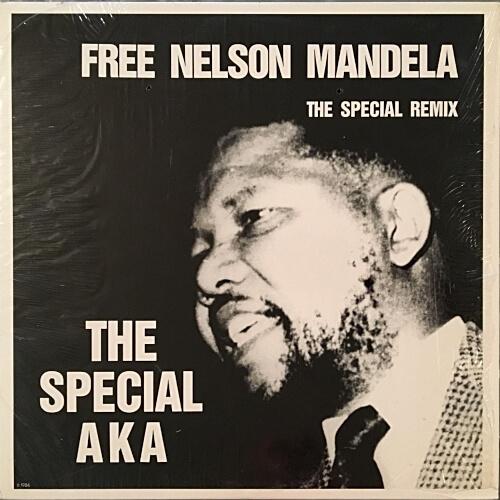 The chorus (including the opening a cappella) was sung by Claudia Fontaine and Caron Wheeler from the British group Afrodiziak - the duo sang with The Special A.K.A. live on The Tube in 1984. The pair also performed backing vocals for The Jam's "Beat Surrender" and for a number of other 80s artists, including Madness during 1984 and 1985. Backing vocals were also provided by Polly and Molly Jackson and Naomi Thompson.
Of course, the duo are probably best-known for singing together on the No.1 hit single "Back To Life" by Soul II Soul which was released in 1989.
The song has a jubilant feel rather than a melancholic one, which many protest songs seem to have, and is influenced by South African music.
By the time the song was released, lead singer Stan Campbell had already left the band, but was persuaded to perform the song on Top Of The Pops.
The B-side features the track "Break Down The Door". The 12" vinyl featured extended versions of both the A-side and B-side of the 7". The US 12 inch featured three versions of "Free Nelson Mandela", a Club Mix, Instrumental Mix and LP version.
The song was lifted from the band's third studio album In the Studio, which was produced by Jerry Dammers, Dick Cuthell and Elvis Costello. The album reached No.34 in the UK, and was not as successful as the band's previous two albums which had both reached the top 5 and received a Gold sales certificate. However, it received mostly positive feedback from the critics. Alexis Petridis awarded the album a 5 star rating in 2015 in a review for The Guardian newspaper.
In the video, the band perform the song in what looks like a social club which has a small stage that remains unused in the video. It also features breakdancing.

Released on the 2 Tone record label, "Free Nelson Mandela" entered the UK singles chart at No.68 on 11th March 1984, while German band Nena were at No.1 with "99 Red Balloons". The single reached No.9 on 8th April for two weeks.
The song was particularly successful in New Zealand, where it reached No.1.

The single was re-made and re-released in 1988 to mark the 70th birthday of Nelson Mandela, but failed to become a major chart hit, stalling at No.93 in the UK singles chart.
To mark their 40th Anniversary, The Specials released a new album Encore in February 2019, which featured their first new music in 37 years.